It should come as no surprise, but I’m going to say it anyways: I am 100%, completely on board with Aquaman.

The James Wan directed film finally showed off some footage with a special trailer for San Diego Comic Con, and lemme just say : “HELL YES”. Everything about this movie looks bananas in the best way possible, from armored sharks to the fact that Jason Momoa says “badass!” when he first arrives in Atlantis. Warner Bros is leaning in HARD on the “Aquabro” aspect of Momoa’s casting, and I am totally there for it. END_OF_DOCUMENT_TOKEN_TO_BE_REPLACED 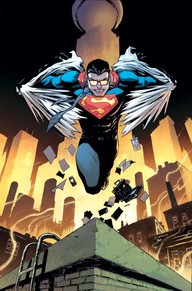 Now that the dust has settled in Man of Steel, Brian Michael Bendis has started his runs on Superman and Action Comics. While Superman will focus on the Man of Steel’s personal life, Bendis’ Action Comics, which begins with issue 1001 (no renumbering here), focuses on the heroic adventures of Superman. Teamed up with artist Patrick Gleason, the first issue of Bendis’ run isn’t as action-packed as described, but still seems to be setting up some pretty intriguing things. END_OF_DOCUMENT_TOKEN_TO_BE_REPLACED

It’s always a little nerve-wracking when you revisit a film that had a major impact on pop culture. To say that The Dark Knight completely changed what we think about movies, specifically superhero ones, when it came out ten years ago is the understatement of the century. But after a decade of films that tried to copy it’s success, and especially since the release of the underwhelming (but still pretty good) Dark Knight Rises and Warner Bros’ DCEU entries that started with the Nolan produced Man of Steel, does it still hold up as the masterwork that I remember it being?

The short answer is yes, it does. END_OF_DOCUMENT_TOKEN_TO_BE_REPLACED

Tom King continues to put the Dark Knight into new and interesting places, and nowhere is that more apparent than in Batman #51, which puts Bruce Wayne into a situation we’ve never seen him in before: jury duty. Partnered with artist Lee Weeks, the latest issue of Batman doesn’t directly tie into the events of the previous “wedding” issue, but it does feature some truly remarkable moments that could go down as a new classic Batman story. END_OF_DOCUMENT_TOKEN_TO_BE_REPLACED

The Joke’s On You

So that Joaquin Phoenix Joker movie is officially happening. Yup, the one that has The Hangover‘s Todd Phillips directing. And HAD Martin Scorsese (yes, THAT Martin Scorsese) producing, but now will just be produced by his production company. It’s Warner Bros’ big attempt to not only differentiate themselves from the superhero movie market, but also try and salvage whatever goodwill they have left after the disappointing critical (and some commercial) performances of Batman V Superman, Suicide Squad, and especially Justice League, as well as maybe get some Oscar play for their studio. While I’ve already made my feelings widely known in regards to the idea of giving the Joker an origin movie, there is a part of me that can’t deny the curiosity I feel regarding this. It’s either going to be brilliant or a colossal mistake, but it could be the thing to save WB’s DC films. END_OF_DOCUMENT_TOKEN_TO_BE_REPLACED

Easily one of my most anticipated comics of the year is the relaunch of Amazing Spider-Man. Despite Nick Spencer’s involvement (no, I’m still not over Secret Empire), the fact that Invincible artist Ryan Ottley is making this his first comic since the end of the Image series is more than enough to get me to stand up and pay attention. With an artist known for big, bombastic art like Ottley, it’s easy to expect that this opening issue will be a good showcase for him, but I’m more surprised by the fact that Amazing Spider-Man #1 seems to indicate that the Nick Spencer that wrote Superior Foes of Spider-Man is back as well. END_OF_DOCUMENT_TOKEN_TO_BE_REPLACED 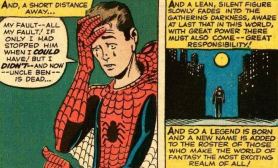 Steve Ditko has passed away.

The co-creator of Spider-Man and Doctor Strange stayed away from the public eye, preferring a private life where he could work on his art. But while he may not have the star power of Stan Lee, or the larger than life impact of Jack Kirby, the Marvel universe and superheroes as we know them wouldn’t be the same without him. END_OF_DOCUMENT_TOKEN_TO_BE_REPLACED

Movie Review: Ant-Man and the Wasp!

After the events of Infinity War, it might seem a little strange for Marvel Studio’s next release to be Ant-Man and the Wasp. But it worked for the previous Ant-Man movie, which was released after Age of Ultron, and guess what? It works again here. Building off of the charm of the original film, while also adding some much needed female super heroics, Ant-Man and the Wasp is a fun, if a little inessential, entry into the Marvel Cinematic Universe. END_OF_DOCUMENT_TOKEN_TO_BE_REPLACED

It’s the big day. Wedding bells are in the air for The Dark Knight and Catwoman, and DC is pulling out all the stops for their nuptials. From exclusive retailer variant covers to giant press release parties, all eyes are on Tom King and Mikel Janin’s Batman #50. There’s a TON of hype surrounding this book, so much so that DC felt confident enough to release the book on July 4th, typically one of the worst weeks for comic sales. So, how’s the final result? END_OF_DOCUMENT_TOKEN_TO_BE_REPLACED