The adventures of Din Djarin (Pedro Pascal) and “The Child” have played out over the last eight weeks, and they’ve covered a large swath of the Galaxy Far, Far Away, traveling to planets new and old, and meeting characters established and ones (relatively) new to Star Wars fans. It’s no secret that the hype around this season was huge, and it was going to have to work extra hard to avoid the dreaded “sophomore slump” after Baby Yoda became THE hottest thing on the planet before the world shut down. And for the most part, the second season of The Mandalorian did just that. When the show was firing on all cylinders, balancing fan service with plot momentum, it hit that sweet spot that only Star Wars can, and it was strengthened by the undeniable emotional core of Din Djarin, the Mandalorian, and Grogu, The Child.

END_OF_DOCUMENT_TOKEN_TO_BE_REPLACED

Ode To A Skywalker

As I type this, I’m rewatching Attack Of The Clones, the worst Star Wars movie, and the one that features a character I legitimately like in the franchise who was treated the worst possible way: Anakin Skywalker.

Yes, he’s whiny, annoying, bratty, badly acted, and kind of ruins the mystique of Darth Vader (okay, there’s no kind of, he does), but there’s something about the character that I’ve always liked. I’ve always been intrigued by the “fall to villainy” story trope, but it’s extremely lacking in the Star Wars Prequels, which is a really big problem since it’s the main story of those films. Honestly, I think the Anakin stories in my imagination (and the spin off comics and books featuring him) are far more interesting than the official story we got, and it’s very difficult to not watch the Prequels and think about the ways George Lucas could have improved the story. END_OF_DOCUMENT_TOKEN_TO_BE_REPLACED

The Rise of Trailer

Okay, so the title for this column isn’t the best, but it’s gotta fit in with the newly announced title to the final episode in the Star Wars saga: The Rise of Skywalker. Like The Last Jedi, there’s a whole lot to unpack in those four words, and since JJ Abrams and the cast of the movie aren’t going to spoil it for us, we’re just gonna have to get ourselves all worked up trying to figure out just what the hell it means. END_OF_DOCUMENT_TOKEN_TO_BE_REPLACED

The Return of the Mandalorian

After a long wait, we finally have some details on John Favreau’s Star Wars show. Titled The Mandalorian, the show will focus on a “lone gunslinger type” navigating the Star Wars universe after the fall of the Empire. It sounds like a really cool idea for a show, and also just the kind of thing to pique my interest enough to subscribe to another streaming service. END_OF_DOCUMENT_TOKEN_TO_BE_REPLACED

Star Wars, Nothing But Star Wars

Back when Disney acquired Lucasfilm, the big worry from some subsets of fandom was that the house of Mouse would bleed the property dry. Thankfully, aside from releasing a Star Wars movie a year for the past three years, there hasn’t been too much fatigue for the galaxy far, far, away just yet. But now that Disney has announced an upcoming Rian Johnson trilogy, a second trilogy from Game of Thrones show runners D.B. Weiss and David Benioff, and TWO shows to be unveiled on Disney’s planned streaming service, I think it’s safe to say that we may start to have that sinking feeling of Star Wars not becoming special anymore. END_OF_DOCUMENT_TOKEN_TO_BE_REPLACED 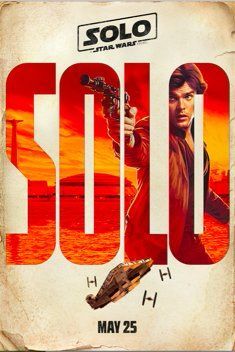 For better or worse, the Solo trailer has arrived, and while it doesn’t exactly soothe my worries about the film, I’ll admit that there is some pretty neat stuff in the first look at the latest “Star Wars story”. But there’s still something that feels a little off, and I think I know what that is: Han Solo. END_OF_DOCUMENT_TOKEN_TO_BE_REPLACED