Comic Reviews: Guardians of the Galaxy and Batman Beyond Universe! 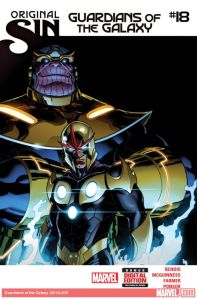 Guardians of the Galaxy #18 (Marvel Comics)

The Guardians enter Original Sin with Guardians of the Galaxy #18, which is an extremely strong issue after some pretty less than stellar ones. This issue by Brian Michael Bendis and Ed McGuinness isn’t an exact Original Sin tie-in. In fact, the banner on top of the cover is more of an excuse to finally shed some light on how Star-Lord and Thanos made it out of the Cancerverse back in The Thanos Imperative. And before you say anything, yes, things happen in this issue! END_OF_DOCUMENT_TOKEN_TO_BE_REPLACED 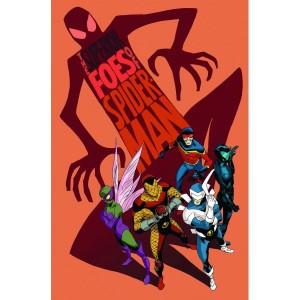 Superior Foes of Spider-Man is ending in November. Now it’s not surprising, as Superior Foes hasn’t exactly been burning up the sales charts, but there’s still a part of me that wishes this series would still continue (not without Nick Spencer and Steve Lieber, of course). END_OF_DOCUMENT_TOKEN_TO_BE_REPLACED

Comic Reviews: Multiversity and The Fade Out!

The wait is over: Grant Morrison’s magnum opus, Multiversity, is finally on the shelf. This alternate universe-spanning tale has been building in Morrison’s brain for ten years, and now, it’s finally out. Multiversity #1, drawn by Ivan Reis, is the first in a series of one-shots that will tell the whole Multiversesity tale. But with so much hype around this issue, is it any good? Hell, is it even readable? END_OF_DOCUMENT_TOKEN_TO_BE_REPLACED

Another week, another Sony Spider-Man rumor. Unfortunately for me, this one goes against the current crop of rumors suggesting that Marvel Studios MAY get the rights back. The latest news from Sony’s Spider-man “brain trust” has announced that they are planning another film alongside the in development Sinister Six and Venom (or should I now say Venom Carnage) movies: one that will feature, for the first time in a post-Avengers world, a female lead.

Now before I begin my rant, let me be clear: I’m 100% on board with a movie starring a female superhero. In fact, I’ve long been waiting for Marvel to finally announce a Captain Marvel movie, or for WB to finally get in gear and give Wonder Woman her own film. But Spidey, who I’ve already mentioned has limited characters who could support their own movie, has an even SMALLLER pool of female heroes that could get their own films. Really, only three come to mind: Black Cat, Silver Sable, and Spider-Woman. We can probably count Spider-Woman out, because I would assume that she’s under Marvel Studios’ ownership (she’s primarily been an Avenger anyways, and her resurgence in comics came after the original Sony Spider-Man films were under way). END_OF_DOCUMENT_TOKEN_TO_BE_REPLACED

I’ll admit it; my hopes weren’t very high for Expendables 3. I’m a pretty big fan of Stallone, Arnold, and Statham movies in a “these are so ridiculous that I love them” way, but as much fun as the Expendables series is, they’ve always left me wanting just a little bit more. Plus, to add insult to injury, this entry in the series was committing a cardinal sin and receiving a PG-13 rating, an act that almost made me not see it in theaters (seriously, my twitter rant about it is easy to find). END_OF_DOCUMENT_TOKEN_TO_BE_REPLACED

Comic Reviews: The Amazing Spider-Man and The Walking Dead!

Spidey’s “Original Sin” tie-in continues with Amazing Spider-Man #5, which picks up right where writer Dan Slott and artist Humberto Ramos left Spidey last month: on top of a rooftop, making out with Silk, the mysterious Spider-Woman that Peter Parker found last issue. However, before things get really hot and heavy, Peter puts the stop on things once he realizes that Silk knows his secret identity. After asking her questions about her family, Peter brings Silk back to his apartment so they can look for them, but they end up making out again. END_OF_DOCUMENT_TOKEN_TO_BE_REPLACED

Another San Diego Comic Con has come and gone, and with it comes a whole slew of announcements both movie and comics related. This year, I was surprised to see that a lot of things I was expecting to happen (WB revealing the cast of the Justice League, or Marvel telling us the actor that will become Doctor Strange) didn’t happen at all. Despite this, there were still plenty of announcements and surprises, to get our nerd engines running, and we’ll start with a pretty big one from Marvel Comics….. END_OF_DOCUMENT_TOKEN_TO_BE_REPLACED

Five Ghosts is a pretty strange series. It follows an adventurer named Fabian Gray who is in possession of a piece of “ the dreamstone”, an artifact that allows him to tap into the abilities of five “literary ghosts”. These ghosts, the wizard, the archer, the samurai, the detective, and the vampire, are obvious references to famous characters like Dracula and Robin Hood, and it creates a really fun twist on the Uncharted/Indiana Jones adventures that Grey goes on.

This series, written by Frank J. Berbiere and featuring art by Chris Mooneyham, has just recently been optioned by a television production company, so now is probably the time to check it out. Luckily, the 2nd collection, Lost Coastlines, has just been released. While it’s not as strong as the debut volume, it’s still a very cool and accessible entry for fans of the adventures of Nathan Drake and Dr. Jones. END_OF_DOCUMENT_TOKEN_TO_BE_REPLACED

Movie Review: Guardians of the Galaxy

It’s official: Marvel Studios cannot be stopped. Guardians of the Galaxy is a movie that oozes confidence. Simply put, there’s nothing quite like it out in theaters right now, and there hasn’t been a movie like this in a long, long time. This is Marvel throwing their weight around, effectively daring the general movie going audience to see a movie that features a talking raccoon and his best friend, a giant walking tree. This is a movie directed by James Gunn, who’s most known for smaller scale films like Slither, Super, and Tromeo and Juliet. The lead actor is on an NBC sitcom that doesn’t get nearly the ratings it should, and the most well known star of the film isn’t even seen, but heard. Not only that, but the soundtrack, which features a ton of pop songs from the 70’s and 80’s, is far from the norm when it come to big budget superhero flicks. None of this should work. END_OF_DOCUMENT_TOKEN_TO_BE_REPLACED