Comic Reviews: The Return Of The Joker! 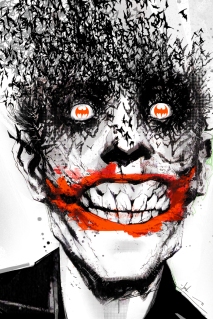 The stellar run by Scott Snyder continues, and this time, Jock joins him on art duty in a tale that gives us Snyder’s dark spin on the greatest villain in comics, The Joker. Snyder’s script focuses on Comissioner Gordon, who after learning that the Joker has escaped (yet again), calls his estranged wife to ensure that she is safe. However, while on the phone, she is attacked, and Gordon finds her body with that sickeningly wide grin on it. The Joker is back, and Gordon’s family is on his hit list.

Or are they? Snyder and Jock expertly show us the differences between the Bruce and Dick Batman, as Dick goes after Joker, immediately agreeing with Gordon’s belief that his family is in danger once again. Dick follows the clues and hunches he’s given, and finds The Joker in the catacombs under Gotham cathedral. GrayBat starts his attack, and we get some fantastic interactions between the two adversaries, especially when Joker mentions that this Batman isn’t “his bat”. Joker also keeps pleading his innocence with Dick, telling him that he’s waiting for “his Bat” to return. What happens next is one of the best cliffhangers in recent memory, and has me salivating for the next issue.

If it sounds like I’m a broken record, I’m sorry, but I’m saying it again: Scott Snyder is killing it on Detective Comics. It’s so good that it will probably be one of those collections that you give to people to read who want to get into comics. Jock’s art once again is phenomenal, and once we get into the Gotham catacombs, he shifts his style, giving it a very creepy feeling. His visual for The Joker is one of the most disturbing I’ve seen of the character, and I’ve seen a lot. This issue is a must buy regardless of if you’ve been following Snyder’s run (which you SHOULD be), as it can stand on its own. Seriously, buy this.

The Cape  is a follow-up miniseries to the fantastic one-shot comic based on author Joe Hill’s short story, and should NOT be confused with the terrible NBC show. Released last year, the Eisner-nominated story followed Eric, a slacker who after getting dumped by his girlfriend, finds his cape that he played with as a child. Except this cape allows him to fly, and unlike many of the heroes we read in our funnybooks, Eric isn’t a nice guy.
Writer Jason Ciaramella takes Hill’s story and expands on it, showing us the aftermath of Eric’s actions from the one-shot (which is probably still available at your local comic shop), and he sets up some great moments. Zach Howard handles the art duties, and his work really captures the grittiness and darkness of the story. While I love reading about superheroes, sometimes it’s refreshing to read a story about a very, very bad person, which is why I’m sticking with The Cape.

The first issue of the relaunched Daredevil continues Marvel’s “Big Shots” initiative, in which major creators are given b-list characters. Writer Mark Waid and artists Paolo Rivera and Marcos Martin, who both give this issue a fantastic retro feel with their artwork. As someone who has only a passing interest in Daredevil (I still need to finish reading the Brian Michael Bendis/Alex Maleev run) I have to say, I was very impressed with this opening issue.

The issue starts with Daredevil dropping in on one of the biggest mob weddings in New York City, under the assumption that someone is attempting to assassinate one of the heads of the families. While there, The Spot attacks the family, with his goal being the young flower girl, whom he will hold for ransom. What follows is a pretty awesome sequence in which DD drops down, uses his powers to expose the mob boss who hired The Spot, then proceeds to beat the ever loving shit out of him. It’s a really well done sequence that I think Paolo Rivera nailed. Later on, Matt Murdock learns that his previous dealings with both mob families may run a lot deeper than he originally thought, and after a pretty cool page in which he changes into his costume as he falls off a building, he’s later attacked by a certain character who has a movie premiering this week…..

To say that I was surprised by Daredevil is a supreme understatement. Maybe it’s because I’ve only read a few of his stories, but I really enjoyed this book, and I thought the art was well worth the price. I know that Marcos Martin (who handles the great back up tale also written by Waid) and Rivera may not be everyone’s cup of tea, but I feel that they really set the retro tone of the book for me. Waid’s script was light, and while that may turn off some (or all) Daredevil fans, he does give a fairly good reason for Murdock’s new outlook on life. As far as this new take on Daredevil is concerned, I’m in for issue two.

Tony Daniel is still writing and drawing the monthly Batman title, which of course means that I still can’t really form a positive or negative opinion on it. I have nothing against the guy personally, I just have always found his work to be just “meh”. There could be worse people writing and drawing Batman…..Anyways, this issue is the conclusion of  Daniel’s three part Two-Face/Riddler story, in which Harvey Dent’s  wife Gilda has returned. Naturally, Harvey Dent/Two-Face isn’t too happy about this, and after squaring off with both him and The Riddler, Batman (Dick Grayson) now finds himself caught in the middle.
While I appreciate Tony Daniel bringing the mob back into the Batman comics, I could really do without the goofy sidekicks like “Catgirl” and “Enigma” (the Riddler’s daughter). There’s just something about them that is well, lame, to be honest, and the conclusion to this story is really, really dumb, and kind of an insult to Dick Grayson. He’s definitely way more competent than Daniel shows us in this issue. Oh well, at least come September Scott Snyder will be writing this title…..but then again, Daniel will be handling Detective Comics……

Comic Reviews: The Conclusion of WAR OF THE GREEN LANTERNS! 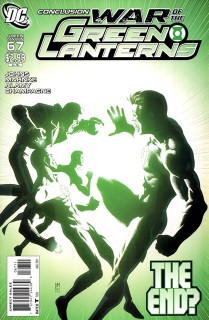 And, now, “The War Of The Green Lanterns” has ended, and what a ride it’s been. Geoff Johns and Doug Mahnke definitely deliver a jaw dropping finally, with some great moments that somehow hadn’t been spoiled just yet (with the exception of the ending).

The finale finds Hal Jordan, John Stewart, Guy Gardner, and Kyle Rayner freeing their comrades in the “Crayola Corps”, and confronting Krona, the fallen guardian. Doug Mahnke’s art is spectacular here, presenting us with some jaw-dropping splash pages peppered throughout the issue. I can’t get too into Geoff John’s story this issue without spoiling something really spectacular that will be picked up in the DC relaunch, but I have to say, I am extremely impressed with this issue, and cannot wait to see how the events here play out in the rest of DC universe.

Jonathan Hickman’s Image book The Red Wing launches this week, and it is an extremely fresh and original take on time travel. The story follows a pilot and his son, who are at war with an alien race in different time periods. They travel in ships that don’t just travel in air, they also travel through TIME. Pretty sweet right?  Hickman shows us both the “present”, as well as the past, as one pilot is stuck in time, while his son believes he is still alive, years after he is presumed dead. This is a fantastic and intriguing first issue from Hickman, and the art by Nick Pitarra is phenomenal. The Red Wing is one of those “perfect first issues” that gives you some answers, but intrigues you as well to keep reading. This is a book to definitely keep your eye on.

Comic Reviews: Fear Itself vs. Flashpoint


It seems like it took Fear Itself four issues to finally get going. Oh wait, that’s because it has. The big Marvel event finally starts ramping up in the action department, after Bucky’s completely expected death last issue. While this issue finds even more non-surprises, it at least keeps the action going, and gets the plot moving faster than a snail’s pace.


Matt Fraction’s script has some pretty great moments in this issue, especially Iron Man’s attempt to appeal to Odin. His “offering” is pretty powerful, and ties in perfectly with Tony Stark’s famous battle with the bottle. Thor brings the fight to The Serpent, even though it is prophesied that he will fall after killing him. Also, it should come as no surprise that Steve Rodgers returns as Captain America. In fact, I didn’t put a spoiler alert in front of this review because it was pretty obvious from the get go. He does have a movie coming out in 2 weeks you know.


Stuart Immonen’s pencil work is great. His depiction of the chaos in Manhattan finally gives this event the grand scope that we’ve been promised, but I’m still wondering where the aspect of “fear” fits into this event. All of the promo images leading up to this event hinted at many of the Marvel heroes facing their respective fears, and yet there haven’t been too many examples of this. We were also told that “real-world” problems would be talked about in the event, and unless Washington, D.C. was attacked by giant Nazi robots in the past week, I don’t think we’ve gotten those either. The fourth issue of Fear Itself finally showed the potential for the series, let’s hope it continues the streak.

On the flip side, we have Flashpoint, DC’s summer event that started off strong and gets better with each issue. This issue finds Barry Allen and Batman recruiting Cyborg in helping them find the Flashpoint universe Superman. Geoff Johns and Andy Kubert once again expertly balance showing us the actual story, but also another glimpse into one of the Flashpoint spin-off, this time Lois Lane and The Resistance. Those interested in how the Wildstorm universe will fit into the DC relaunch in September should be sure to seek this issue out. The big reveal regarding Superman is pretty awesome, and once again, I find myself waiting the next issue of this mini-series like a kid waiting for Christmas.