With DC’s Young Animal relaunch under way, the next title to get a new fresh start is Mother Panic. But where the original series followed the lead character in current Gotham City, this new series, titled Mother Panic A.D., follows the character in a new reality that is decades in the future, where Batman has disappeared from Gotham. It’s a pretty drastic change, but it’s just the type of thing I was hoping for when DC announced they would be restarting this imprint. END_OF_DOCUMENT_TOKEN_TO_BE_REPLACED

The Evolution of Tony Stark

I’ve recently begun the massive undertaking of rewatching the Marvel Studios releases in preparation for Infinity War, and while I’m only three movies in, that’s still enough to make me take pause and recognize one of the coolest aspects of the MCU: the gradual evolution of Tony Stark. END_OF_DOCUMENT_TOKEN_TO_BE_REPLACED

I’ll be honest, I think every aspect of Weapon H sounds like a bad idea. The very idea of combining The Hulk and Wolverine into one character seemed like the worst Marvel has had to offer, but I went along with the idea cause I didn’t think it would go beyond a story line in Weapon X. But how wrong I was, as we’ve now got a series from Weapon X writer Greg Pak and artist Cory Smith that showcases the newest Marvel mash up character. While it doesn’t do much to convince me that this character deserves a solo series, it does have the potential to be a pretty dumb and fun action series. END_OF_DOCUMENT_TOKEN_TO_BE_REPLACED 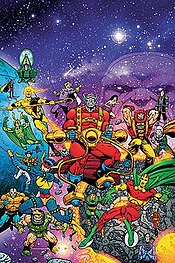 Thursday night Warner Bros dropped some pretty unexpected news: we’re getting a New Gods movie. While that’s surprising news on its own, the choice of director to bring Jack Kirby’s creations to the big screen is probably even more surprising: Ava DuVernay, the director behind Selma and A Wrinkle In Time. Picking DuVernay to bring the world of Darkseid, Orion, and Mister Miracle to life is both a surprising and bold choice, but I’m pretty excited to see how she goes about bringing these characters to the big screen, which is going to be interesting, to say the least. END_OF_DOCUMENT_TOKEN_TO_BE_REPLACED 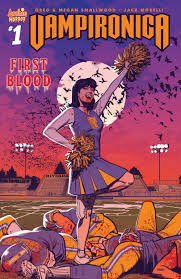 At long last, Veronica Lodge gets the chance to shine in an Archie Horror book. After being on the sidelines of Afterlife With Archie and Jughead The Hunger, the raven-haired heiress gets to take the stage in Vampironica, the latest in Archie’s line of horror-themed series. Written by Megan and Greg Smallwood and drawn by Greg Smallwood, Vampironica‘s opening issue is a lot bloodier and impressive than the goofy title would suggest, and hints at another breakout hit for the publisher. END_OF_DOCUMENT_TOKEN_TO_BE_REPLACED

As it stands right now, I’m nine episodes into the second season of Jessica Jones, and I gotta say, it’s not very compelling. While the first season was a surprisingly complex and invigorating narrative, so far the second season has devolved into subplots that are uninteresting, drawn out, and not even focused on the title character. Krysten Ritter is still fun to watch, but everything else just seems…off. Which leaves me to ask: what went wrong? END_OF_DOCUMENT_TOKEN_TO_BE_REPLACED 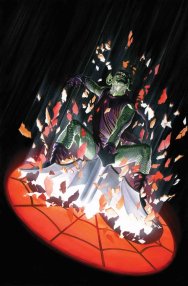 The time has come. Dan Slott is leaving The Amazing Spider-Man. After years of penning the wall-crawler’s adventures, the writer is prepping one last story, and it’s set to be one hell of a finale for Slott and artist Stuart Immonen. Not only has Norman Osborn returned as the Green Goblin, but he’s got an ace up his sleeve: none other than the Carnage symbiote. As the beginning of “Go Down Swinging”, Amazing Spider-Man #797 is not only a great kick off to what’s sure to be a bombastic event, it’s also a great example of how great Dan Slott is on the book when he’s on his game. END_OF_DOCUMENT_TOKEN_TO_BE_REPLACED

Dan Slott is leaving The Amazing Spider-Man. It was bound to happen one day, but it’s still a shock to realize that a day is coming very soon where Slott’s name won’t be on the title anymore. After being on the book for a decade, the writer is leaving behind a massive legacy on the book that will be very hard for anyone following him to live up to. Luckily though, there’s one name that will be coming to the book that will definitely make an impact: Ryan Ottley. END_OF_DOCUMENT_TOKEN_TO_BE_REPLACED