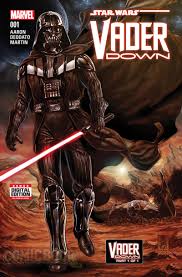 For being the first big Marvel Star Wars event, “Vader Down” has a pretty small-scale plot: Darth Vader is marooned on a planet housing a Rebel fueling facility. With Rebel forces surrounding him, the Dark Lord of the Sith has to fight his way off the planet, and while we KNOW he’ll be fine, that doesn’t mean that Jason Aaron and Mike Deodato’s kick off special issue isn’t a blast to read. END_OF_DOCUMENT_TOKEN_TO_BE_REPLACED