Comic Reviews: The Riddler and Sons Of Anarchy! 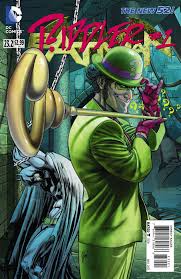 The second week of DC’s “Villain’s Month” arrives, and it looks like we’ve already got a frontrunner for the best issue of the event.  Plotted by Scott Snyder and Ray Fawkes, Riddler #1 is a modern day revenge tale that ably showcases the strengths of Batman’s smartest foe.

Unlike last week’s Joker #1, Riddler takes place in modern day Gotham and finds Edward Nigma making his way through the biggest puzzle in Gotham: Wayne Enterprises.  Like a thinking man’s Die Hard, Nigma works through the security systems with ease, ably taking out the many security blocks designed to keep unwanted visitors from passing through the tower’s doors.  As Nigma gets closer to the top, we learn the real reason why he’s so interested in the tower: years ago, an Arkham guard knocked him down and took away his playing cards. Now that guard is head of security at the Wayne Enterprises, and Riddler is looking to get his revenge.

At this point, I shouldn’t have to tell you that Scott Snyder has delivered a great Batman tale. However, I should mention that he came up with the plot for this issue with Ray Fawkes, who is credited with scripting this one shot.  Normally I would cry foul over Snyder only plotting (again), but the man is writing so many excellent series that I’m not surprised that he couldn’t find room in his schedule to write another book. END_OF_DOCUMENT_TOKEN_TO_BE_REPLACED