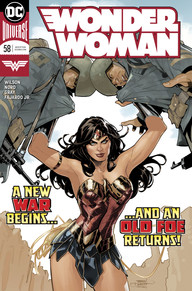 Despite having a film that was a massive success critically and financially, Wonder Woman’s adventures on the comic page have taken a bit of a hit lately. After a great relaunch from Greg Rucka and artists Nicola Scott and Liam Sharpe, Wonder Woman took a bit of a nosedive when other creative teams took over. Luckily for us though, Ms Marvel writer G Willow Wilson has arrived with artist Cary Nord to take the Amazonian Wonder into a new adventure, and so far Wonder Woman #58 looks to be just the thing Wonder Woman needed. END_OF_DOCUMENT_TOKEN_TO_BE_REPLACED

After Extremity, I made the decision to follow writer/artist Daniel Warren Johnson on any book he decided to work on. While I was definitely expecting something crazy for his next project, in no way was I prepared for Murder Falcon. A raucous love letter to all things Metal and Rock, Murder Falcon #1 is a jolt of intensity on every panel, and it’s one of the best debut issues of the year. END_OF_DOCUMENT_TOKEN_TO_BE_REPLACED