Image hasn’t produced a lot of great superhero comics for a while now. Ever since the end of Invincible, the publisher has shied away from superhero fare, focusing more on titles that don’t fit in with the tights and capes crowd. But Stealth, the new series from Mike Costa and Nate Bellegrade (based on an idea from Robert Kirkman and Mark Silvestri) looks to change that, with a pretty neat hook that will leave readers surprised by the end of the first issue. END_OF_DOCUMENT_TOKEN_TO_BE_REPLACED

A New Dawn for X

I have a confession to make: I wasn’t looking forward to Jonathan Hickman on the X-Men.

Sure, the hype was there, but as someone who really enjoyed Matthew Rosenberg’s run on Uncanny X-Men, and who varies from “he’s great” to “he’s incomprehensible” when it comes to Hickman’s work, let’s just say I wasn’t too thrilled to see him attempt to bring Marvel’s mutants back to their former glory. Marvel’s pitch work, hyping up Hickman’s Powers of X and House of X as the “single most defining moment in X-Men history” struck me as way too overboard, and when I saw the sheer amount of charts in House of X‘s first issue, I rolled my eyes so hard that I thought they would fall out of my head. END_OF_DOCUMENT_TOKEN_TO_BE_REPLACED

To Infinity War and Beyond!

Holy crap, did you see that Infinity War trailer?

Go ahead; I’ll wait for to see it. No, for real, take a look. END_OF_DOCUMENT_TOKEN_TO_BE_REPLACED 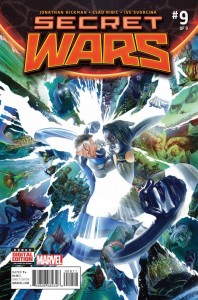 At long last, the finale of Jonathan Hickman and Esad Ribic’s Secret Wars has arrived. The long delayed concluding chapter has the inenviable task of wrapping up a major event and setting up the status quo that Marvel fans have been aware of since October. And for the most part, Secret Wars succeeds. It definitely feels a little rushed, but when compared to other Marvel events (Age of Ultron, I’m looking at you), Secret Wars is one of the better event stories that Marvel has published recently. END_OF_DOCUMENT_TOKEN_TO_BE_REPLACED

The latest big Marvel event is here: Secret Wars. Jonathan Hickman’s mega event has been years in the making; we just didn’t know it until now. Teamed up with Thor: God of Thunder artist Esad Ribic, the first installment of the eight-issue event contains an insane amount of action and tragedy for the heroes of both the 616 (Regular Marvel) universe and the Ultimate Universe, and is an extremely entertaining debut issue. END_OF_DOCUMENT_TOKEN_TO_BE_REPLACED 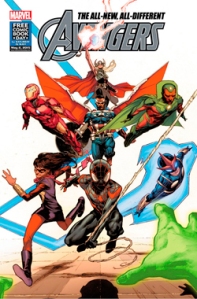 Marvel’s first Free Comic Book Day offering is a glimpse into the post-Secret Wars Marvel Universe. All-New, All-Different Avengers follows the newest incarnation of Earth’s Mightiest Heroes, featuring mainstays like Captain America, Vision, Thor, and Iron Man (albeit in different forms), and newcomers Nova, Ms. Marvel, and Miles Morales, the ultimate universe Spider-Man. Writer Mark Waid and artist Mahmud Asrar’s one in done adventure is a really fun look into what’s ahead for Marvel, even if it doesn’t answer any questions. END_OF_DOCUMENT_TOKEN_TO_BE_REPLACED

This Tuesday, Marvel had their “announcement to end all announcements” (their words, not mine). Many people were wondering what it could possibly be: getting the movie rights to Spider-Man back? Rebooting the universe? Relaunching Rom: SpaceKnight? The Internet was abuzz with speculation, and now, we can finally talk about it, because the announcement is….

That the Marvel “616” Universe and the Ultimate Universe will combine together for Secret Wars, and that Battleworld is going to be the new Marvel Universe, with each alternate reality being a different “country”. END_OF_DOCUMENT_TOKEN_TO_BE_REPLACED

Jonathan Hickman’s other Avengers title kicks into high gear with New Avengers #24, which is also under the “TIME RUNS OUT” banner. However, unlike the Avengers issue, NA doesn’t waste anytime giving you what you really want: Namor and the Cabal absolutely wrecking stuff up.

Actually, this issue gives us even more than we bargained for, as it also features a pretty healthy helping of Dr. Victor Von Doom as well. The issue opens with Namor meeting with Doom and asking for his help with stopping the incursions that have been threatening Earth since the beginning of New Avengers. In the eight-month gap between this issue and the last one, Namor is finding that his Cabal, which includes members like Thanos, Terrax, and Maximus, is becoming too hard to control, and they’re sensing that Namor doesn’t relish destroying worlds like they do. Of course, Doom turns Namor down in one of the best scenes of the issue. Hickman’s dialogue for this scene is so good that it makes me want him to write a Doctor Doom ongoing right this second. END_OF_DOCUMENT_TOKEN_TO_BE_REPLACED

Last week, in my review of Avengers #23, I mentioned my concern with the finale of Infinity not having enough time to properly showcase the battle between the Avengers and Thanos. Thankfully, I was proven wrong. The final issue of Infinity is a break-neck battle for the fate of Earth that surprisingly teases very little things to come in its final pages. Unlike Age of Ultron, which had ads for the follow-up series every few pages, Infinity has a very clear and set ending that gives us a single tease for the upcoming series Inhumanity.

Much like with last week’s issue of Avengers, Writer Jonathan Hickman tones down a lot of his “Hickman-speak” for this finale, and instead focuses entirely on the battle with Thanos and his army in Wakanda. The seemingly separate plot threads between Avengers and New Avengers come together in a great way, and there are a lot of fantastic battles here in this issue. However, it’s Hickman’s great characterization of Thanos that stands out.  His response when the Avengers arrive to help Hulk is awesome, and right on point with how the mad Titan typically responds to Earth’s Mightiest Heroes. Even the use of Thanos’ son Thane is handled well, which is surprising considering how little time he’s in the story. END_OF_DOCUMENT_TOKEN_TO_BE_REPLACED