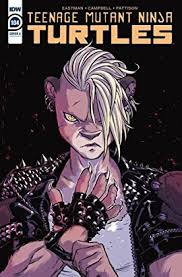 The Teenage Mutant Ninja Turtles have gone through a lot of changes in the past few months. Splinter has died, the brothers have gone their separate ways, a small community of mutants have carved out a living space in New York City, and the Turtles have a new ally with Jennika, the former human now humanoid turtle that is trying to understand her new life as a giant walking shelled mutant. Since the bombastic events of the “City At War” storyline that culminated in issue 100, IDW’s Teenage Mutant Ninja Turtles has been given a bit of a subdued storyline from writer/artist Sophie Campbell (who’s working with story outlines from Tom Waltz and TMNT co-creator Kevin Eastman), and that’s served as as surprisingly welcome change of pace for the heroes in a half-shell.

Still reeling from the devastating events of the big hundredth issue, Teenage Mutant Ninja Turtles #104 is another slower-paced issue, but this breather allows for more character development for the brothers, and especially Jennika, who really starts to come into her own with this issue. Slowly coming to terms with her new life as a, well, Ninja Turtle, she starts to see the differences between herself and her fellow mutants, and stands her ground against longtime frenemy to the Turtles, Old Hobb. But this newfound confidence hits a snag when it comes to attempting to get the four Turtles to join up with one another again.

Sophie Campbell may be working from outlines and consults from Kevin Eastman and Tom Waltz, but this series feels entirely her own. By slowing down the pace and delving into the ways the different characters all are dealing with the death of Splinter and the dissolution of their team, Campbell has oddly injected new life into this series, and gone into greater depth with the Turtles then I honestly think has ever happened before. It’s a surprisingly mature take on these characters, and a really welcome surprise.

Of course, it should go without saying that Campbell’s art is pretty great her too. Honestly, it’s so good that I’m in awe of the fact that Campbell was able to put out this kind of art while also scripting the series. Campbell’s able to do wonders with the emotions on the different character’s faces, something that becomes really surprising given the fact that this series is primarily starring a bunch of characters that aren’t even human!

For a while I was debating about dropping Teenage Mutant Ninja Turtles after it hit issue 100, but I’m glad that I ended up sticking with it, as this book has honestly never been better than right now. This is a surprisingly adult take on the heroes in a half-shell, and while it’s not “adult” in the “super violent original comics” kind of way, the fact that this book is taking the time to show the toll of the Turtles’ constant battles is something that I never expected from the series, and has become a very welcome change.

It seems like we just had an X-O Manowar #1 from Valiant, and judging by the publisher’s output, we did. And while the constant renumbering for the series has gotten a little (okay, a LOT) old hat by now, Dennis Hallum and Emilio Laiso’s new #1 actually serves as a good jumping on point for readers who either never read an X-O story before, or fell off the character the last time he was renumbered and relaunched.

Aric, the 5th century warrior who has found himself in an alien armor in modern day, is attempting the whole “superhero” thing, and so far, he’s doing…just okay at it. While he’s able to stop missiles and bank robbers, he struggles with pulling all of that off with ease and minimal collateral damage. As he traverses the modern day, learning about basketball, modern cars, and other things we take for granted, Aric slowly warms up to life in modern times, until a new enemy with knowledge of Aric’s armor comes into play.

Dennis Hallum’s script covers a lot of ground in a short amount of time, and usually that would be cause for alarm. But surprisingly, for a book that bounces from Harlem to Canada and back again, X-O Manowar #1 is a pretty straightforward read. Seeing Aric’s numerous attempts to understand modern times is very entertaining, and his frustrations with the things we take for granted are pretty hilarious at times. While there’s not a lot of plot in this first issue, Hallum’s use of humor and characterization of Aric more than makes up for that.

If Valiant has a “house style”, than Emilio Laiso is definitely it. A mix of Stuart Immonen with a little bit of Rafael Albuquerque, Laiso’s style is perfectly suited for this series, and is pretty diverse as well. Like Hallum’s script, Laiso has to depict a lot of things in a small amount of time, yet at no point does this art seem rushed or out of place. It’s a real treat to see Laiso’s art here, and I’m really curious to see what he’s going to draw next issue.

While it’s another #1 issues that will probably get lost in the Valiant shuffle, X-O Manowar #1 is a title that honestly deserves to be checked out if you have the wiggle room in your comic budget. Unlike previous runs on the character, this one looks to forego the big bombastic action and instead tell the more human side of Aric and his alien armor as he struggles to find his place in a world he doesn’t know.