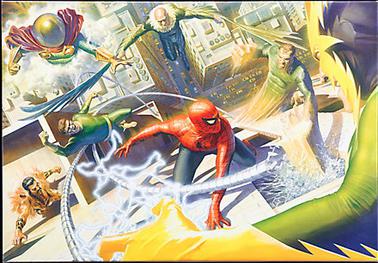 Now that Morbius, the next Sony movie that’s a spin off that won’t feature Spider-Man, is finished and being released later this year we finally have an idea of what’s in store for us when it comes to the post- New Deal that Sony and Disney have made. As depicted in the first trailer for the film, Jared Leto’s Michael Morbius walks down a hallway, and we hear the sound of Michael Keaton, and then see Keaton himself address the living vampire in an obvious ploy to connect this film to the larger MCU.

Now, it’s not exactly clear that Keaton is back as Adrian Toomes, aka The Vulture, but by all accounts it’s probably Toomes that Keaton is playing. It’s an interesting move for Sony to make, as it all but strong arms themselves into the Marvel Cinematic Universe, a move that probably doesn’t sit well with Kevin Feige, but was probably the one concession they had to make to get one more MCU Spider-Man film made. It also means that Sony is back on their “Sinister Six” movie plan.

Sony’s wanted to make their own Sinister Six film going as far back as Amazing Spider-Man 2, and that was honestly the closest they got to one (until now). They had a director in Drew Goddard attached, and the end of Amazing Spider-Man 2 set up The Vulture, Doctor Octopus, Kraven, and more for a future film, despite the fact that none of those characters had appeared in any of the Andrew Garfield films. It was designed to be from the perspective of the villains all going after Spider-Man, except there’s one problem with that: a majority of them wouldn’t have even met Spider-Man by that point.

The main reason for Doc Ock, Electro, Sandman, Vulture, Mysterio, and Kraven teaming up was because they all individually lost to Spider-Man. By teaming up, they believed that they’d be able to finally get rid of Spidey and be free to keep up their individual schemes. Of course, that didn’t work out for them, and many times the group would come undone from within by constant infighting, but their main draw to work together is based on their prior losses to Spidey. Removing Spider-Man’s history with each character completely changes the dynamic of the group, kind of like how removing Spider-Man from Venom completely changed the dynamic between him and Spider-Man.

Unlike their previous Sinister Six plans, this time it MIGHT work out for the studio. Assuming that they use Keaton’s Vulture, Bokeem Woodbine’s Shocker, Michael Mando’s Mac Gargan,and somehow resurrect Jake Gyllenhall’s Mysterio, you’d have more than half of the team already. Throw in Morbius and Tom Hardy’s Venom and the team is all complete. Plus Vulture’s history with Spider-Man would be enough of a reason for him to form a team of villains….except for the fact that at the end of Spider-Man: Homecoming it’s implied that Toomes had a begrudging respect for Spider-Man for saving his life at the end of the film by not telling Gargan Spidey’s true identity in prison. It would take a lot of work to make Vulture’s turn to villainy make sense, but it’s doable I suppose.

At any rate, we’re going to get a Sinister Six movie whether we want it or not, and I suppose if we HAVE to have one, using some of the more recent villains we’ve seen is a good enough. At the very least, it’s better than trying to introduce six new characters, have them team up, and give them all a reason to fight Spider-Man in one film, which is a terrible idea. It’s not the worst idea Sony has had in regards to their Spider-Man films, which is saying something.