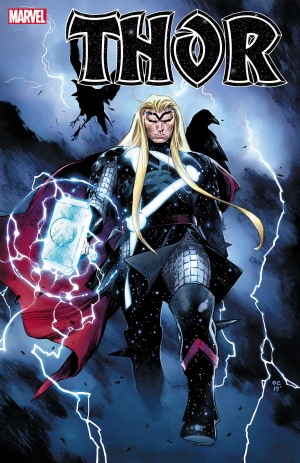 Not content when putting his stamp on Thanos, Venom, and the Guardians of the Galaxy, Donny Cates has set his sights on the God of Thunder next, relaunching Thor with artist Nic Klein. After a career-defining run from Jason Aaron, it would be difficult for any creative team to wield Mjolnir, but like his other series, Cates comes right out of the gate swinging with a debut issue that’s truly something else.

Settling in as the King of Asgard, Thor has already become restless. Longing for his days of being an Avenger, the new All-Father is attempting to balance his time on the throne, but the tasks for a king are many, and Thor is trying his best to live up to his father. But when Galactus comes to Asgard, with a threat of the “Black Winter” coming for all reality, Thor must assemble the other former heralds of Galactus together, and the new All-Father must prevent destruction coming to Asgard before it’s too late!

One of Donny Cates’ gifts as a writer is coming up with plot beats and ideas that are both unique and exactly what you would want to see happen with a character. I won’t spoil what occurs to Thor by the issue’s end, but I will say that is proves that Cates is a machine for content, and his ideas aren’t slowing down anytime soon. Nearly everything Cates has learned from his time on his other books is used here. From the out there cosmic ideas of Thanos and Venom, to the stellar character work from Guardians of the Galaxy, it all gets melded together for a solid first issue that’s a great starting point for Thor AND Donny Cates.

Nic Klein wouldn’t have been the first artist I’d put on a Thor book, but I have to admit that I was extremely impressed with his art here. Donny Cates’ script bounces from action packed moments to quiet scenes where Thor has to oversee his kingdom and subjects, yet Klein is able to handle all of these moments and more ably. A style reminiscent of both Lienil Yu and Olivier Coipel, I anticipate Thor raising his profile even more.

Impossibly, Thor continues Donny Cates’ hot streak at Marvel, and presents a new chapter in his ongoing work with the company that also serves as a great introduction to the character and the writer as well. The rate things are going, I wouldn’t be surprised if Cates ends up becoming the new long-term tenured creative at Marvel, he’s that good.

Despite having one of the best comics of the previous decade, Clint Barton can’t seem to capture the same magic he had when Matt Fraction and David Aja were detailing his exploits. But that doesn’t mean Marvel hasn’t been trying, and while many previous Hawkeye series have tried (and failed) to recapture his former glory, Hawkeye: Free Fall has something those other series didn’t: Matthew Rosenberg. Rosenberg has become quite the rising star at the publisher lately, with stellar runs on Uncanny X-Men and The Punisher, and he’s a natural fit for Clint Barton, as he tries to figure out just who’s under his former Ronin outfit.

Rosenberg has a great sense of character, and he makes Hawkeye just enough of a jerk to be annoying, but not so much that you really want to see him get his comeuppance. He’s confident enough to be able to take on low-level thugs, but at the same time, his cockiness against an enemy like The Hood makes it all the more funny when his plans blow up in his face, and when he has to team up with Winter Soldier and Falcon, the book really comes alive.

Otto Schmidt is probably most well-known for his work on Green Arrow for DC, so the fact that he’s pencilling this book is a pretty fun surprise. But Schmidt’s slightly cartoony style works wonders for Rosenberg’s script, and the two have a great complimentary style that makes this opening issue flow really naturally. If there’s any luck, these two will continue working together on other future projects.

Hawkeye: Free Fall is a really fun little adventure that adds to Rosenberg’s growing list of accomplishments as a writer. While it doesn’t take itself too seriously, it’s also not a complete goofball of a series, striking a great balance of humor and action. If this miniseries is a test to see if I’d want to read a Hawkeye series by Rosenberg, the answer is a resounding “YES”.