So Long And Thanks For All The Walkers! 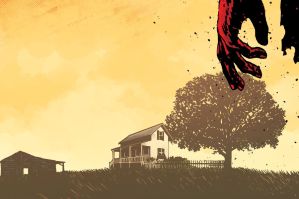 Something happened that many thought never would: Robert Kirkman’s pop culture behemoth, The Walking Dead, is ending.

No, not the show, but rather the comic book that started the whole mega franchise. Surprising everyone from retailers to readers to industry insiders, Kirkman and artist Charlie Adlard make the surprise move THE WEEK The Walking Dead #193 hit stands, and readers didn’t know it would be the end until they reached the conclusion of the issue (which was double-sized, which should have been an indication that something was up).

The surprising conclusion is easily the most shocking move in a comic that thrived on shocking moves. Kirkman’s series had characters age in real-time, and over the course of it’s fifteen plus years, numerous characters were completely changed, both physically, mentally, and in the case of many characters, mortally. It’s easy to take this series for granted now, but for a long time the series was one of the most daring comics on the stands, and I’d argue that it continued to be so long after the show hit it’s creative peak.

Speaking of the show, while I stopped watching a few seasons ago out of boredom, I have to give it credit for getting some much needed new blood into the comic book genre. I lost count over how many times we’d have new faces come into the comic shop looking for the trade paperback collections to either find out what happens next, or see what the original stories were like. And once they blew through those collections, there was even more for them to check out with Walking Dead spin offs and other Image, Marvel, and DC titles. I can honestly say that The Walking Dead is the ONLY comic book adaption that has ever lead to direct sales for our store, and who knows, maybe this will free up the show to try out some new and daring things now that they are even more untethered from the comic series.

So where does this leave fans of the series? Hell, where does it leave comic stores, the place that was arguably helped the most by the Walking Dead‘s huge popularity?