← Comic Review: Guardians of the Galaxy and Hardcore!
Bye-Bye, Batfleck → 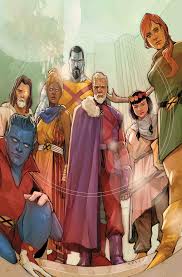 Not content with just relaunching Uncanny X-Men, Marvel has a new X-Men event coming our way with Age of X-Man Alpha, the new starting point for, you guessed it, the Age of X-Man miniseries that will be hitting in the next few months.Fortunately, this event isn’t following in the footsteps of Age of Apocalypse and taking the place of the X-Men series that Marvel currently produces. Unfortunatley, the Zac Thompson, Lonnie Nadler, and Ramon Rosanas special doesn’t do a whole lot to convince you to keep going with this event beyond the miniseries.

After being pulled into the mysterious void created by Nate Grey in Uncanny X-Men, Marvel’s merry mutants find themselves in a world where Mutants are no longer feared and hated, but integrated with the human race. Zac Thompson and Lonnie Nadler bounce between many familiar faces from Uncanny, filling us in on their current goings on, and setting the stage for the many Age of X-Man miniseries that are coming our way.

Yet, there’s a sense that we’ve seen this before, and not just once, but multiple times, in events like Age of X and even House of M. The idea of “Mutants being the majority” isn’t a new one. In fact, it’s been used so much that it’s practically an X-Men sub-genre, one that can slide right behind “potential future” as a plot point that’s been used to death.

On the art side of things, Ramon Rosanas keeps in line with the art style that’s been prevalent throughout Uncanny X-Men‘s run, and for the most part, its pretty effective. There’s not a lot of action in this special, but Rosanas knows how to make even the most static shots pretty dynamic, so you won’t get too bored looking at his art.

I wasn’t really that interested in Age of X-Man before this book came out, but I can tell you that after reading this special, that interest hasn’t changed much. While I’m sure that there will be some mini-series in this event that will be worth checking out, the Age of X-Man Alpha special sure doesn’t convince me to check out any of the other ones. 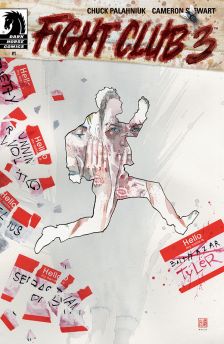 Yes, Dark Horse is releasing another installment in Chuck Palahniuk’s Fight Club series, despite the fact that Fight Club 2, a sequel to the novel, wasn’t a very good comic. I was hoping that the experience of working on the previous installment would have sharpened Palahniuk’s scripting abilities, and while it’s definitely improved, it hasn’t improved enough to make this third installment a recommend.

Picking up after the events of the second Fight Club series, this issue finds the narrator looking for a job. Or at least, I’m pretty sure he is, as just like in the previous series, Palahniuk enjoys really screwing with your expectations while reading it. I appreciate messing with the comic book form as much as anyone, but sometimes it gets to be a bit much, especially when it makes the story I’m trying to read feel pretty incomprehensible.

At least Cameron Stewart’s art is still solid. Playing with panel layouts is a trick that seemingly anyone can do, but Stewart crafts some pretty intriguing and surprising ways to make it all seem fresh, and the addition of the “flies” on the page are a nice touch as well (if a little gross).

All in all, there’s nothing in Fight Club 3 that would convince you to give it a shot if you weren’t a fan of the previous series, so I can’t really recommend it unless you’re a Palahniuk die-hard. If so, more power to you, you’ve got a weird story ahead of you. The rest of us will just sit and wonder what other projects Dark Horse will latch onto before they fold up shop.

← Comic Review: Guardians of the Galaxy and Hardcore!
Bye-Bye, Batfleck →