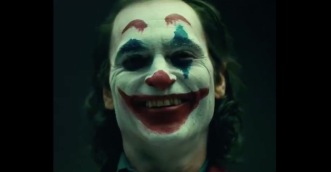 Last week, we got our first glimpse of Joaquin Phoenix as “Arthur”, the man who would become The Joker in next year’s Joker film directed by Todd Phillips. Was it underwhelming? You bet. But it did help set expectations for what type of film Phoenix and Phillips would be creating, even though it was a bummer that we didn’t get to see Phoenix all done up as the Clown Prince of Crime.
Until this weekend, that is.

Todd Phillips, in conjunction with Warner Bros, dropped the reveal of the new take on the Joker, and it’s a lot of things. Different. Creepy. Messy. Whatever way you want to describe it, it was definitely not what many of us were expecting. Phoenix’s makeup resembles something more like what John Wayne Gacy would wear as opposed to the more done up style of Jack Nicholson or even Heath Ledger’s take on the character. Like the take on The Joker from The Dark Knight, Phoenix’s Joker will have the face paint look, as opposed to the bleached all over skin like other, “proper” interpretations of the character.

To be honest, this is one of my disappointments with Phoenix’s Joker. Both he and director Todd Phillips promised us a “new and different” take on the character, and while that’s certainly the case to a degree here, this realistic take on the character isn’t entirely new. I was honestly hoping for something more along the lines of weird chemical burns that caused his skin to appear bleached white. While it wouldn’t be that realistic, it would at least be a little more comic book accurate, and add to the “tragic angle” that this iteration that the filmmakers have teased.

One of my other nitpicks is the amount of makeup on Phoenix. While the grin, eyes, and hair look great (and suitably creepy), there’s a lot of extra stuff on him that looks pretty all over the place. The red nose and blue half diamond above one of his eyes are a little distracting, and make him look more like a character you’d see at a local haunted attraction during Halloween than the Clown Prince of crime. It screams “less is more” to me.

But aside from those quibbles, I’ll admit that the brief glimpses we get of Phoenix doing his weird dance in the video are really creepy, and the mannerisms we see in the leaked set videos do help cement this movie has something darker than even Christopher Nolan’s take on the character. Aside from that, Phoenix’s look seems to have nods to the many different versions of the character, but the two that stand out the most in this take on him are Caesar Romero’s Joker from the Adam West TV Show and Heath Ledger’s iconic take on the character. Phoenix looks to be mashing up both versions of the character to craft his take, and I’ll be honest, I’m interested in what the end result will be.

As a lot of you know, The Joker is my favorite villain in fiction, and part of his appeal and charm is the fact that like Batman, he’s pretty malleable, and thrives on new interpretations. Maybe that’s why I’m more willing to go along with this take on the character. He’s been around for seventy-five years, and let’s be real, this isn’t the worst take on the character (that “honor” goes to The Batman cartoon, who decided to make him a beast-like gymnast, with Leto’s “Damaged” take a close second). Besides, this may not even be the actual final look for the movie, as a recent set video has the make up looking a little different than what we see here. Who’s to say that this isn’t one of many “trial runs” that this “Arthur” tries out on his descent into madness?

This Joker movie is an anomaly for me. While I don’t think it’s necessary, I’m also extremely intrigued by many aspects of it. Joaquin Phoenix is one of our best actors alive today, and I’m sure he’ll do something unique with the role, but he’s also long been vocal about not wanting to do a comic book movie. So I have to wonder what exactly it is about this movie that got him to sign up. Is the script that good? Or was the money too good to pass up? It’s also strange that the director behind Old School and The Hangover series is the one behind the camera. While I know Todd Phillips has handled some more “serious” subject matter in the past, is he really the right guy for the job? And just who exactly is Marc Maron going to play? These questions are all ones that keep me interested in what this movie is going to be, and while I do want to see a bit more before I make a decision on if it’s worth my time to see (mainly what Phoenix’s laugh will sound like), I can’t lie when I say that I’m at least liking this small glimpse of this take on the character so far.

At least he doesn’t have “Damaged” tattooed on his forehead.