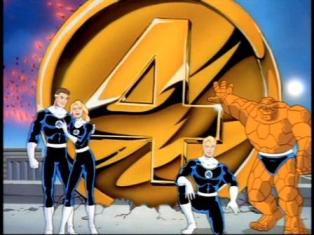 This week marks a pretty big occasion: the return of the Fantastic Four to comic stands. The lack of a FF title on the shelves has been felt for the past few years, and while The Thing/Human Torch lead Marvel Two-In-One series has been plenty entertaining, it still wasn’t the same. We need the Fantastic Four back on our pull lists, scanning the galaxy and beyond for threats to the universe, and it’s definitely a welcome treat to have them back where they belong.

My first experience with the Fantastic Four was in Spider-Man #23, a comic that I’ve gone over numerous times that I won’t bore you with again. But my favorite early memory of the FF wasn’t with the original team. No, as a child of the 90’s, I became quickly enthralled with the short lived “New Fantastic Four”, which consisted of The Hulk, Wolverine, Ghost Rider, and Spider-Man. Was it a gimmick designed to get more people to pick up Fantastic Four? Hell yes. Did it work on a six-year old kid who loved all four of those characters? You bet. But like a lot of kids who grew up in the early to mid-90’s, the real introduction to the Fantastic Four was in the now classic Marvel Action Hour block.

Paired with the Iron Man animated series (which had Tony Stark rocking a truly amazing mullet), the Fantastic Four animated series took many of the classic Stan Lee and Jack Kirby stories and adapted them into animated form for younger viewers. Week after week, I was introduced to characters like Black Panther, The Silver Surfer, Galactus, Annihilus, and more, in a format that was arguably the best way possible for the world of Reed Richards, Sue Storm, Ben Grimm, and Johnny Storm. Hell, I can still sing the theme song from memory without skipping a beat. I’m positive that the animation style hasn’t held up (if it’s anything like the X-Men cartoon at least), but anytime I see the Fantastic Four it brings me right back to being a kid again, getting up early on a Saturday morning to catch that block of television.

It’s been a pretty big bummer watching the FF’s status diminish in the eyes of Marvel, but I’m happy that they’re finally making their big comeback now. As the first superheroes to debut in the “Marvel era”, they deserve to always have a spot on the comic racks. Any other scenario just doesn’t work.