DC’s summer plans aren’t slowing down anytime soon. First they unleashed No Justice, then Brian Michael Bendis’ Man of Steel, and now the brand new Justice League #1 has arrived, with the new creative team of Scott Snyder and Jim Cheung. With a roster that harkens back to the classic Cartoon Network show and a brand new, universe shattering story, the comic is finally back to a place of quality that the characters deserve.

Something big is coming to Earth. Known as “The Totality”, it has the potential to bring whoever finds it great power. Naturally that means some people, namely Lex Luthor’s newly created “Legion of Doom”, want it for their purposes. But Martian Manhunter knows the true meaning behind the Totality. It’s a sign of Earth’s eventual destruction due to the dying multiverse, and while Martian Manhunter doesn’t want to believe the visions he’s seen of being the only surviving member of the universe, he also knows that there must be some truth to them. But how can he explain it to his fellow teammates?

Despite the fact that Justice League #1 takes place after No Justice, you’ll be happy to hear that you don’t need to have read that previous miniseries to understand what’s happening here. In fact, Scott Snyder has crafted what could be the perfect jumping on point issue. Every member of the League is introduced in a fun way (that involves poking fun at Batman), and the central concept is extremely easy to get into. Plus, Snyder is able to work in some of the hokier aspects of the League, namely “The Hall of Justice”, and make them work within the story. It should come as no surprise by now, but Snyder is also able to nail every member of the team’s personalities, and while some of them don’t get a lot of stand out moments, the one that surprised me the most was the Martian Manhunter. I’ve never really gotten into the character, but Snyder has a great emotional hook and grounds the story around him in a way that’s really effective.

Like Brian Michael Bendis, Jim Cheung has made the jump from Marvel to DC, and man, is it awesome to see his work here. Cheung is easily one of the most dependable and underrated artists in comics, and he puts out some truly dynamite pages here. From epic splash pages of the Hall of Justice, to fantastic panel reveals of each member taking on Vandal Savage’s goons, Cheung delivers. You’ll have to pick your jaw up off the floor when you see his take on one of Martian Manhunter’s transformations.

Justice League #1 isn’t just a ton of fun, it’s also one of my favorite comics of the year. While it does focus on the potential destruction of the Multiverse, it’s presented in a clear way that both long time DC fans and newcomers can enjoy. In a lot of ways, Snyder and Cheung have distilled down what makes the Justice League work: giant, earth shattering problems that only these heroes can solve together. It’s easily the book the team has deserved for a long time now. I can’t wait to see what happens next. 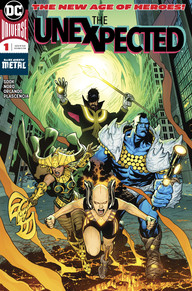 The “New Age of Heroes” at DC isn’t over yet, as The Unexpected makes their way onto comic shelves this week. Written by Steve Orlando and featuring art by Ryan Sook and Cary Nord, The Unexpected has a more mystical theme than the other “Age of Heroes” books, and while that’s certainly a unique spin on the book, I’m not sure it’s enough to make the book stand out on it’s own.

Ronan has a unique ability: her skin can erupt into flames. Powered by a mysterious engine in her chest, she needs to charge the device every 24 hours with an adrenaline rush that can only be found through fighting. As a former Paramedic, Ronan continues to secretly work in hospitals under assumed names, but when she’s attacked by a creature hoping to harness her engine, she comes across the Unexpected, a group of mysterious mystics who help her escape her captor.

One of the things I’ll give The Unexpected #1’s script is that it’s certainly unique. Steve Orlando has crafted a pretty interesting character in Ronan (also known as Firebrand), and there’s a few things about this debut issue that are pretty intriguing. But on the the other hand, this is another book in DC’s “New Age of Heroes” line that comes to an abrupt end right when the book is picking up steam. Right as we are starting to find out what the Unexpected’s deal is, we’re slammed with a “next issue” blurb. There’s simply not enough about the team to get you truly invested.

Artists Ryan Sook and Cary Nord share the art duties on this issue, and their styles are similar enough that you needn’t worry about any major shifts in the art in this issue. Both Sook and Nord have solid character designs for the members of the Unexpected, but their design for the creature going after Ronan is probably my favorite. They do elevate the book’s script by quite a lot, and if you’re a fan of their work, you’ll like what you get here.

I hate to say it, but so far it seems like DC’s “New Age of Heroes” is a bit a of bust. With only one book that i’m actively still reading and enjoying (The Terrifics), that’s not a great track record. It’s a shame though, cause I was genuinely interested in what they had planned for this new line, but it looks like it’ll be over before it really gets a chance to get off the ground if this is the best they’ve come up with for new heroes.