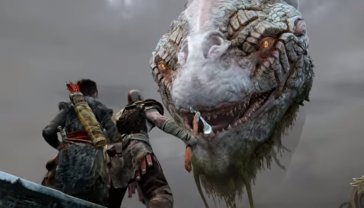 When it was announced that Santa Monica Studios would be dipping into the world of God Of War for a fourth entry, I, like many, just assumed we’d be getting the same game as the previous entries in the franchise, but in a new mythological setting. But when I started up the fourth entry in the series, simply titled God of War, I wasn’t prepared for what I was going to get. Gone is the intense, action packed uber violent combat. In its place is an over the shoulder, tightly focused evasive style of fighting, albeit one that is still violent. The main character, Kratos, isn’t even interested in hunting down the gods of the new Nordic realm that he’s made a life in. In fact, the main crux of the story of this new entry is his quest to bring his wife’s ashes to the highest peak in the realm. Alongside his son, Atreus, Kratos makes the long journey to the peak, all while new enemies try to prevent him from reaching his goal.

So yeah, the new God of War is very different from the original series of games. Everything from the combat to the story has been completely torn down and rebuilt, and in doing so, it’s rejuvenated a franchise that, while I still love, has definitely been in need of an overhaul. As much as I love the original games, they haven’t aged well, especially in their treatment of women. But the new entry in the series has Kratos reflect on his past in a remarkably meta way, and in doing so it becomes not only the best entry in the franchise, but a fascinating character study as well.

Giving Kratos a “sidekick” in his son Atreus could have been a game-breaking disaster, 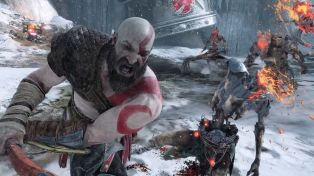 but he’s actually an extremely innovative addition to the franchise. Atreus sticks to the sides of combat, peppering bad guys with distracting arrows, but as you progress through the game you can power him up to become a formidable ally in your quest. But Atreus serves more than just a combat role in God of War, he’s also where the game shows a surprising amount of heart, as his relationship with Kratos is explored in heartbreaking ways. Through his son, Kratos sees the amount of damage his previous life of anger and violence did to himself and his family, and he tries to prevent that from happening to Atreus. There’s a moment early on in the game where Atreus, in a grief-stricken rage, mindlessly stabs a giant that he and Kratos just killed. Kratos pulls the child away, telling him “he’s not ready”, but we know that this is Kratos’ way of trying to get through to his son and tell him that the path of blind anger will only end up hurting him in the long run.

Kratos is also another interesting figure in the new game. After being a one-note rage monster for the series, seeing the game slow down and showing the character try (and fail) at reaching his son on an emotional level is another incredible deviation from the formula that Santa Monica Studios employs. And it works extremely well. Kratos’ journey of revenge left him with literally nothing at the end of God of War III, including a home. Knowing that destructive power is still within him haunts the character, and the scars and bandages on his arms where his Blades of Chaos used to be don’t help to bury those memories either.

Speaking of the Blades of Chaos, they’re long gone (at least as far as I can tell from my playtime). In their place is Stormbreaker, the mystical axe that was forged by the same dwarves who crafted Mjolnir. Those same dwarves pop up from time to time to allow you to upgrade the axe and your armor, allowing you fully customize the way Kratos and Atreus look and play. It’s probably the only part of this new God of War that has ties to the old series, but like everything else, improves on the old “leveling” up that the series only half-heartedly embraced.

Not only that, but the side quests that give you more armor and hacksilver to purchase power ups becomes plenty addicting. At the time of this writing I’ve been playing the game for a week, and I still feel like I’ve barely scratched the surface of what it has to offer. God of War isn’t quite open world, but it is still MASSIVE. Many times I’ve found myself heading towards the main story mission to progress the plot, only to find myself side tracked by a quest for a wandering spirit, or trying to let a dragon free from it’s chains. The sheer variety of side quests is pretty exhausting, but there’s enough variation to make it feel brand new every time.

To say I’m impressed with the new God of War is an understatement. As a fan of the franchise, Santa Monica Studios has crafted a game that has completely surpassed my expectations (which were pretty high after reading the early reviews for the game). Taking a character like Kratos and giving him the Unforgiven/Logan treatment is an idea that I never even considered, but I’m glad that it exists. Simply put, if you own a PS4, there’s no reason to not own this game. It’s a new modern classic.