← Star Wars, Nothing But Star Wars
“A Bold New Direction” →

Comic Reviews: Brave and The Bold and Super Sons! 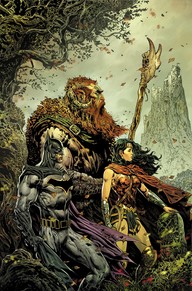 The words “Brave” and “Bold” hold a pretty special place in DC Comics’ long publishing history, and bringing the title back for a special miniseries is no light affair. While typically used as a team-up series with a rotating cast of characters, the latest relaunch of the classic title pairs Wonder Woman and Batman together for a six issue miniseries. While that may not be enough to justify the return of this series, the fact that this series is written and drawn by Liam Sharp will probably be more than enough to get you try it out.

Something is happening in the mystical city of Tir Na Gog, and Wonder Woman is summoned by an ancient Irish being to help solve the mystery. At the same time, Batman is investigating some strange incidents occurring in Gotham City’s Irish district, where citizens seem to be pacing around in a trance like state. As the two separate heroes continue their investigation, they become closer entwined in the central mystery, and begin to cross paths.

Or at least they would if this issue was paced out a little better. While Liam Sharp’s script is certainly very good, it’s got some strange pacing to it that could’ve been tightened up a little. There’s not enough background into the Irish folklore that this story is revolving around, and a good chunk of this issue is Wonder Woman and Steve Trevor on a secret date in Antarctica. There’s very little action in this opening issue, and that may turn people off to continuing the series.

But what will probably keep them though is the art, which is simply stunning. Liam Sharp’s pencils are well known to DC fans thanks to his run on Wonder Woman with Greg Rucka, but with Brave and the Bold Sharp really lets loose, detailing some absolutely gorgeous panels and pages here. Batman and Wonder Woman have never looked better than they do here, and Sharp even has some stellar designs for the mythical creatures of Tir Na Gog as well.

While this opening issue is a little bit of a slow burn, the beautiful art is what’s keeping me going. Now that the main introduction of the story is out of the way, we should be getting some truly awesome moments in the rest of this series. But even if we don’t, I’d be content with just staring at Liam Sharp’s artwork. 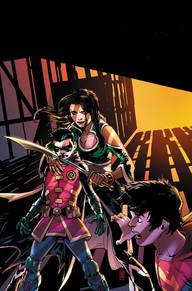 While it doesn’t get the sales or attention it deserves, Super Sons has been one of the most entertaining comics on the shelves. From the first issue Peter J Tomasi has been building on the relationship between Jonathan Kent and Damian Wayne in hilarious and surprisingly touching ways, and all that comes to a very entertaining head in Super Sons #13, which finds Damian attending Jon’s school for the first time.

After years of being home schooled, Damian is none too happy about being back in a regular school setting. Of course, the fact that he’s leagues ahead of his classmates in every subject doesn’t help, but when his mother Talia Al Ghul arrives and demands he help her on a special mission, it only makes things even worse. With Jonathan in tow, the two discover the target that Talia needs help with: Lois Lane, Jonathan’s mother!

This plot is pretty goofy, but honestly that adds to the fun of the series. Tomasi has a great handle on both Superboy and Robin, and he clearly loves having the two of them get on each other’s nerves. In a lot of ways, they read like two brothers who know exactly how to get under the other’s skin. Adding Talia into the mix will hopefully lead to some pretty great internal conflict for Damian as well.

Carlo Barberi is the artist for this issue, and his style works perfectly for this type of book. With a slightly cartoony style, he’s able to give this series the light tone it needs, but it’s also detailed enough to not make it feel like you accidentally picked up an all ages title without realizing it. Everything from the fight panels to a game of kickball look great under his pencils, and I sincerely hope he’s going to be on the book for at least one more issue of this story line.

If you haven’t picked up Super Sons yet, I highly recommend it. This issue is a great one to pick up and try out, but you can always start from the beginning (at just 13 issues deep it’s not too hard to catch up). If you’re looking for a light and fun series, then Super Sons is the book for you.

← Star Wars, Nothing But Star Wars
“A Bold New Direction” →