When it comes to the “big three” of the Marvel Cinematic Universe, the Thor side of things has had it pretty rough. Sure, the original film from Kenneth Branagh is a great introduction to the world of Asgard (I’ll still go to bat for it), but the second entry, Thor: The Dark World, is widely regarded as one of Marvel Studios’ few misfires. With the third entry, Thor: Ragnarok, Marvel Studios made the risky decision to hire What We Do in the Shadows and Hunt for the Wilderpeople director Taika Waititi to helm the film, hoping to inject some new life into the franchise. But does a director who’s more widely known for hilarious indie movies fit into the Marvel Studios machine?

Make no mistake; Thor: Ragnarok is a lot of fun, and certainly probably the best of the Thor solo films. But it’s also really goofy, and intentionally so. Many times Thor is played off as kind of a loveable doofus, and Chris Hemsworth plays this aspect of the character in a very charming way. But changing the tone this drastically after two pretty straightforward films (not to mention appearances in other MCU films), definitely causes a noticeable tonal shift that you need to get used to as the film goes on.

with the enemies of Asgard. Plagued by dreams of Asgard crumbling into ruin, Thor has taken it upon himself to look into what’s been happening to his home in the time he’s spent on Earth. After a thrilling opening battle with the demon Surtur, Thor returns home to discover that Loki (Tom Hiddleston, who can essentially play the character in his sleep by now), disguised as Odin (Anthony Hopkins), has taken the throne of Asgard and sent their father to Earth. Odin’s disappearance leads to the arrival of Hela (Cate Blanchett), who has returned to Asgard with one idea in mind: conquering the rest of universe. After an initial battle leaves him stranded on the planet Sakaar, Thor has to find a way back to Asgard to save his people, with a little help from his pal The Hulk (Mark Ruffalo).

That seems like a lot of plot to get through, doesn’t it? And it is a lot, so much so that the first half hour of the movie zips around at a pace that almost threatens to derail the whole movie. There’s tying up the loose ends of the previous solo film, filling in some details about the MCU at large, a cameo (or two) from a MCU side character (which could be cut out completely but is still a ton of fun), and setting up the stakes for the new adventure, all in a pretty quick time frame. It’s one of the drawbacks to having a connected universe, and really the only point in Ragnarok where it seemed like Taika Waititi didn’t have the confidence in himself as a director or interest in the larger story for a major tent pole film like this. The movie whips around so much with the plot set ups (and establishing the very different tone of this movie from the others), that I was a little worried that Ragnarok wouldn’t live up to the hype that the critics and industry insiders had given it.

But then Waititi sends us to Sakaar, and everything starts to click. Everything about this segment of the film, which takes up a large amount of the run time, is pretty damn spectacular. You can tell that this was the part of the movie that Waititi REALLY wanted to get to, and he lets his imagination run wild here. It’s here that Ragnarok goes full on comic book crazy, with colors and architecture that would make Jack Kirby himself weep.  A planet on the outer edges of the galaxy where the junk of the universe ends up, Sakaar is where we meet Jeff Goldblum’s The Grandmaster, who’s weirder than you could ever prepare yourself for. Seriously, Goldblum is at peak “Apartminternet” here, delivering one of the strangest performances I’ve ever seen in a superhero film, and while it doesn’t always work, you can’t deny that it’s hard not to take your eyes off of him.

Sakaar is also where we get the two biggest and best aspects of Ragnarok: Hulk and Valkryie. Hulk has been on Sakaar for the past two years, and serves as the Grandmaster’s favorite fighter in his “Contest of Champions” gladiator battles that he forces his most prized “prisoners with jobs” to compete in. You can probably guess from the commercials, but Hulk can speak now, and while his vocabulary is limited, it makes for some truly funny moments between him and Thor. The two have an easy, ridiculously fun chemistry together that will make fans of their rivalry in the original Avengers extremely happy. And just like in Avengers, Hulk steals the show in some pretty great action scenes as well.

If Marvel Studios is looking for their answer to Wonder Woman, they’ve found it with 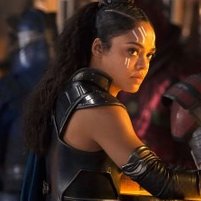 Tessa Thompson’s Valkryie. I’ve been a fan of Thompson’s since Creed, but here she displays not only a skill for action, but comedy as well. Her deadpan delivery and responses to the insanity around her are really great, and there’s even a great spin on the history of the Valkryies surrounding her character as well. Thompson does such a great job that I really hope we see her again down the line, hopefully sooner rather than later.

Valkryie isn’t the only kick ass lady in Ragnarok though, there’s also Hela. Cate Blanchett has a devilishly good time getting to play the big bad, and while she does her best to make some of her quips land, sometimes they don’t always hit the mark. While her plan is pretty much the same as other villains in the MCU’s, Blanchett does strike a pretty impressive and intimidating figure, giant head horns or not. She’s definitely one of the more visually striking and interesting Marvel villains to come along, and I wish we had more of her.

The same can’t really be said for Karl Urban’s Skurge the Executioner, who serves as more of a henchman role with the screen time to match. I love Karl Urban, so I was pretty hyped up to see him in this role, but at the end of the day, his whole story arc, while good, could’ve been cut completely and you wouldn’t have missed much.

Of course, Tom Hiddleston is back as Loki, and like Blanchett, some of his quips don’t always land either. But he’s still the best thing about these films, and definitely still has the same great chemistry with Chris Hemsworth that made them both internet darlings. Speaking of Hemsworth, he’s clearly having a ball here in Ragnarok, showing off more of the natural comedic ability he displayed in Ghostbusters a few years ago. You get the feeling that Thor’s time hanging out with other Avengers and citizens on Earth has definitely rubbed off on him, which does explain why he’s not as stoic or serious as he once was. He’s having so much fun quipping and cracking jokes though that when the time comes for him to get back into the hero mode, it’s a little jarring, much like the film itself.

If you’re a mega fan of Thor, Loki, and the rest of the Asgardian crew that doesn’t want to see some of the piss taken out of this world, then you’re probably going to leave Thor: Ragnarok either very disappointed or straight up mad. But if you don’t mind seeing Thor taken down a few pegs, or looking for a movie more in line with say, Guardians of the Galaxy or Ant-Man than Captain America: Civil War, then you’ll find plenty to like about Ragnarok. It may not be able to juggle all of the various tones and story beats like the best Marvel Studios films, but it’s definitely still worth your time.