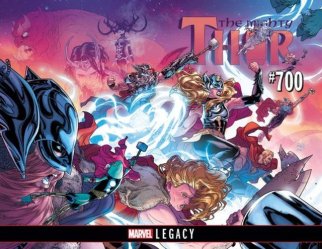 Part of Marvel’s “Legacy” rebranding is a chance to go back to the classic numbering for a majority of their titles, and lucky for them The Mighty Thor was at issue 700. With that comes the start of Jason Aaron’s “The Death Of The Mighty Thor”, which is a pretty ominous title for a lot of reasons. Will this storyline kill off the Jane Foster Thor, who’s been the welder of Mjolnir for the past few years now? Or will Thor Odinson go down? OR will all of the Thors featured in this issue, from Jane Foster to Odinson to War Thor, go down in flames? We don’t get any real clues, but we do get a whole lot of story in this special, double sized issue.

Bouncing between the many Thors of the Marvel Universe, Mighty Thor #700  is a pretty dense issue. Thor Odinson is investigating an impending invasion that threatens the Norn, Jane Foster battles the new Hulk (who’s Jennifer Walters), which also brings in the Frog Thor to help, and Volstagg encounters his cursed Mjolnir and turns into the War Thor once again. It’s a lot of plot to unpack, and the book jumps around a lot to set the pieces in motion for this upcoming storyline. While each of these individual storylines are interesting and will certainly play a major role in Aaron’s long Thor storyline, the constant jumping between settings and characters makes for a pretty jarring reading experience.

Adding to that jarring reading experience is the art, which changes depending on the story being told. Russell Dautermann, Olivier Coipel, Chris Burnham, Headlopper’s Andrew Maclean, Becky Cloonan, and a whole mess of other artists that I’m probably forgetting all handle the different parts of the story in this issue, and while they are all great artists, the constant changes in style is pretty distracting. It’s not a bad problem having these artists on this issue, but a little more care should’ve been brought to the book to make sure everything flowed smoother.

Mighty Thor #700 doesn’t ruin the story Jason Aaron has been telling since Thor: God of Thunder #1, but it’s not the slam dunk epic I was hoping it would be. Part of that comes from the disjointed story that bounces around time and space of the Thunder God, and part of it comes from the fact that that art is so different from page to page. Despite that, it’s still a necessary read for those following Aaron’s Thor saga.

It’s been over ten years since Planet Hulk was released, and now with the upcoming Thor: Ragnarok using ideas and themes from that story, it seems only fitting that Marvel would start a sequel story starring the current Hulk, Amadeus Cho. As part of the Marvel “Legacy” rebranding, the newly numbered Incredible Hulk #709 allows original “Planet Hulk” writer Greg Pak the chance to revisit his classic story and show us what’s happened on Sakaar since the Hulk freed the enslaved races on that planet. With artist Greg Land, Incredible Hulk #709 sets up a very promising start for this new storyline, and should interest fans of the original story.

Amadeus Cho has been floating through space, hoping that through an isolation study he can figure out why he’s been losing control over the Hulk. However, he quickly receives a distress call from the planet Sakaar, which explicitly asks for the “Green Scar”, the name bestowed on the original Hulk when he was there. Knowing that he can’t leave these people who need him behind, Cho takes it upon himself to answer the call.

Greg Pak has a lot of fun playing in the world of “Planet Hulk” again, and it shows with this script. While Amadeus Cho’s Hulk wasn’t the Hulk that visited Sakaar, the story makes a lot of sense for the character, as he’s been recently looking for a way to prove that he can be just as much a hero as the original Hulk. Cho’s interactions with the residents of Sakaar are really entertaining, and Pak even finds time to add to the growing subplot of the Hulk that remains dormant inside of Cho’s body, just waiting for the time to explode out of him.

Greg Land is a pretty controversial artist these days, but I’m happy to report that his art in Incredible Hulk #709 actually looks like comic book art, and not just traced figures. Land’s action sequences and look for Sakaar are all really interesting, and he brings a nice sense of time moving onward and technology changing on Sakaar since the original Hulk left that world. There’s still some of the same problems that Land’s art has had before, mainly in the stiff character work and weird facial expressions, but this some of the artist’s stronger work than we’ve seen in the past.

All in all, Incredible Hulk #709 is a pretty solid return to the “Planet Hulk” saga, and while I’m not sure we need to revisit this storyline, the end result could’ve also been a lot worse than this. The hook will be seeing Amadeus Cho’s journey as a hero for the people of Sakaar, and so far that’s enough to get me interested in this story line.