← Go Then, There Are Other Worlds Than These…
TV Review: Wet Hot American Summer: 10 Years Later → 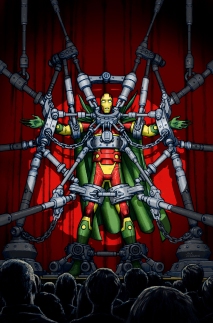 This may sound blasphemous to some, but I’ve never been able to quite crack the New Gods. While I like Darkseid and Mr. Miracle and have read the major aspects of Jack Kirby’s saga, there’s always been some part of them that just seemed too weird to me, so I’ve largely missed out on a huge chunk of necessary comic book lore. But with Tom King and Mitch Gerads’ Mister Miracle, that’s definitely going to change. This opening issue is not only another notch in the awesome body of work from these two creators; it’s also the thing that finally clicked with me when it comes to the New Gods.

Mister Miracle finds Scott Free living in Los Angeles with his girlfriend Big Barda (pretty sure my feeling of weirdness towards the New Gods comes from their names). After attempting suicide, Scott has been seeing visions of people and things that cannot possibly be real. Scott’s also been visited by Orion and his father Highfather with a warning that Darkseid has found the Anti-Life Equation and is planning on launching his massive war against New Genesis. But Scott can’t find it within himself to get up and fight. It’s not until another tragedy befalls his family that he really steps up and decides to enter the fray.

Tom King has been making quite the name for himself on Sheriff of Babylon, Vision, and Batman, but with Mister Miracle he reaches a whole other level. Scott Free seems bored with his life, and King makes the comparison with Scott’s abilities as an escape artist with someone who’s immortal. When there’s no more danger, what else can you do? The reveal of Scott’s attempted suicide at the beginning of the book is pretty shocking, but amazingly King makes you feel for Scott as he struggles with his life and whatever is happening to him after the attempt. Plus King expertly works in a small building sense of dread at the growing threat of Darkseid.

Mitch Gerads has worked with Tom King before on Sheriff of Babylon and some issues of Batman, but he really makes a huge impact here.. Gerads has always had a great sense of scope and body language, and Mister Miracle is arguably the best work he’s done to date as he plays around with panel layouts, delivering everything from 9 panel grids to massive splash pages. Not only that, but Gerads also puts everything he can into his character work. You can sense the pain and confusion on not only Scott, but Barda as well. It’s stunning.

Mister Miracle has a lot of hype surrounding it, and I’m pleased to say that it definitely meets up with that hype. As someone who has been looking for an easy entry point into the New Gods, Tom King and Mitch Gerads deliver on that front, giving us a relatable character that also sums up his life and the New Gods saga perfectly. It also doesn’t hurt that King and Gerads are two of the best creators in the business, and deliver one of the coolest debut issues of the year.

For some reason, mixing supernatural things with the South just works for me. It might be the culture of New Orleans, or the fact that it’s always super hot and swampy, but there’s a good chance that if you set something spooky in the South, I’ll give it a read. Redlands from Jordie Bellaire and Vanessa Del Rey fits into that category soundly. A comic about witches in Florida, Redlands#1 ends up being a really cool and spooky opening issue that promises a pretty awesome series to come.

The entirety of this issue focuses on a Sheriff and his police force held up in their headquarters. Surrounded by an unseen force, things gradually start to go bad for them. The lights go off on their own. Strange chants are heard outside. The prisoners start to go crazy and taunt the police. The Sheriff knows that he took care of the strange women who were haunting their town hours before. But he should’ve been more careful with his victims.

Jordie Bellaire is a name you’ve probably seen countless times in comics. As the go to colorist for seemingly every publisher, she’s got more comic book credits than anyone else in the business. Well, you can now add “writer” to those credits, because she knocks it out of the park with Redlands. Bellaire does a fantastic job of setting up the tension in this opening issue, and I love the fact that she resisted the idea of just giving us the exposition dump that befalls so many debut issues of Image series.

Vanessa Del Rey’s art is a great fit for Bellaire’s script. While it’s a little looser than I typically like, it works really well for the creepy nature of this comic. Del Rey’s art is super cool and moody, and there are definitely some panels that will stick with you for a long time, and probably keep you up at night.

Redlands is a pretty great surprise, and I cannot recommend it enough for horror fans. Longtime readers of these reviews know my love for The Chilling Adventures of Sabrina, and I really think that Redlands has the potential to fit right in with that series. If you’re looking for a comic to really unsettle you, then look no further than Redlands.

← Go Then, There Are Other Worlds Than These…
TV Review: Wet Hot American Summer: 10 Years Later →