Frank Castle’s adventures in the Marvel NOW era have been a little more comic booky than I typically like, but recent issues have definitely improved on the original storyline. Becky Cloonan’s ongoing tale of Frank Castle going after Mutant Growth Hormone drug dealers had been a tiring slow burn, but there’s been a new jolt of electricity to the series in recent months, and there’s no better example of that than in Punisher #14.

A simple one and done story, Punisher #14 revolves around a blackout in New York City that’s orchestrated by a group of robbers. A series of events brings Frank Castle into the fray, who makes quick work of the various thugs harassing the people of New York City. Becky Cloonan’s script keeps the momentum moving really well, and expertly uses Frank Castle’s demeanor and lack of dialogue to great work. Frank moves almost like Jason from Friday The 13th here, taking out criminals one by one. Of course, it’s also nice to see the reactions of his victims when they realize who’s after them too.

Matt Horak’s art continues to deliver with this series. After the unfortunate passing of Steve Dillon, it seemed like Punisher would have trouble finding a suitable replacement. Luckily though, Horak is able to fit into the established art style that Dillon set up, and in a lot of ways, I think he improves on that style. Cloonan wisely lets Horak do a lot of the heavy lifting in this issue, and he doesn’t disappoint with some panels that are extremely fluid and graceful.

While there’s nothing that makes this issue of Punisher stand out, it’s still one of the more solid issues of the series. After putting the Punisher up against some super powered thugs, Punisher #14 is a nice refresher that reminds us why Frank Castle is such a cool character in the first place. 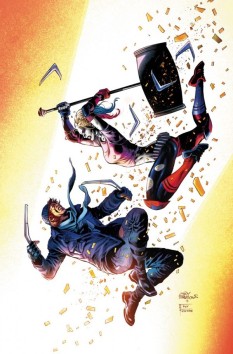 Of all the DC Rebirth titles, few have actually gone through as many changes as Suicide Squad. Rob Williams’ series made a huge splash at the beginning of the Rebirth event thanks to Jim Lee’s art, but after John Romita Jr and Tony Daniels’ runs, the attention has faded a bit. Which is a shame, since there are fewer books that make more changes and have crazier action on the stands than Suicide Squad, and the most recent issue adds to the insanity, as the Squad is now under Harley’s command and at risk of being destroyed by a bomb.

One of the strengths of Suicide Squad is Rob Williams’ characterizations of the team members, and that’s on full display here. Watching these characters bicker as they face certain death brings out a ton of fun moments, and Williams even uses it to reveal some interesting things about our characters, especially Harley’s leadership skills.  The only aspect of this issue that doesn’t work as well is the B plot involving Amanda Waller. It’s tonally different from the Squad’s story, and also feels a bit rushed.

Augustin Padilla handles the art duties for this issue, and while he’s no Jim Lee or Tony S Daniels, he’s still really good. He’s definitely in the Daniels group of artists for this series, and a welcome change from John Romita Jr’s rushed pages that we got a few months ago. Padilla’s art has strong character work and his action flows nicely panel to panel. If he keeps up the work he’s doing here I can definitely see him becoming a major force at DC.

It’s a shame that Suicide Squad seems to have lost a lot of its popularity since DC Rebirth, because it’s a really fun and surprising series. Sure, while it’s probably safe to assume that not everyone whose death is teased is REALLY dead, there’s no other book from the big two that I can think of that takes as many risks as this one.  Plus with the constant rotation of team members, you can pretty much jump in at the start of any storyline.