A Legacy We Don’t Need 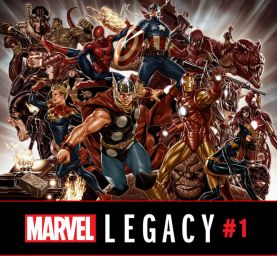 After much hype and anticipation, Marvel has finally announced their plans for “Marvel Legacy”, the next relaunch that THIS TIME is going to count. Many had suspected that Marvel would copy DC’s Rebirth initiative in hopes that it would be just as successful for them.

Well, they didn’t. In fact, it seems like Marvel didn’t even get the gist of what made DC’s relaunch such a success.  Whereas that company took a good hard look at what went wrong with the New 52 and “DCYou” and fixed it, Marvel seems to just be trucking along, business as usual. And it’s going to cause them to fall on their face.

Of the 52 titles revealed (yes, FIFTY-TWO), only six are new series. Hell, technically it’s five because they revealed another new Moon Knight series, even though he just had a series end a few weeks ago.  Now in those new titles there are some comics I’m interested in, namely the Spirits of Vengeance title that features Ghost Rider (Johnny Blaze), Blade, Hellstorm, and Satanna as a new supernatural team, and the return of Marvel Two-In-One, this time starring The Thing and The Human Torch. But everything else just seems like it’s more of the same from Marvel. None of it feels like something the fans want. In fact, it seems like Marvel is gloating that they don’t care what you want, they’re going to tell you what you should care about.

That’s really the big issue here, and as much as I’m looking forward to Two-In-One, it is the biggest example of this philosophy from the company. Ever since the rumors started about the real reason Marvel cancelled Fantastic Four (long story short, it has to do with Fox having the movie rights), Marvel fans have been vocal about getting that team back in a book. Yet Marvel continually tries to find new ways to do everything BUT bring the FF back. The Thing has been a member of the Guardians of the Galaxy. Human Torch joined the Inhumans for some reason. Reed and Sue, along with their children, are off exploring space. Now, with a fresh chance to build up goodwill and give the fans what they actually want, Marvel instead puts both members of the Fantastic Four that are still on the table in a new team-up book, which, while close, still isn’t a Fantastic Four book. While FF was never a huge seller in recent years, it’s legacy as the start of the Marvel Universe was something that everyone kinda thought mattered at Marvel. I guess not.

So aside from the new titles, there are still a whole lot of others that are still around for Legacy that just make me scratch my head (looking at you, Unbelievable Gwenpool). If Legacy ends up underperforming, it’ll be trouble for Marvel. Hell, even if it does the same as the recent “Marvel NOW!’ publishing initiative (yes, the second one), it’ll be trouble for Marvel. Until they actually take a hard look and listen to what their readers want, it’s just going to be more of the same from the “House of Ideas”.