← Comic Reviews: Secret Empire and Bane Conquest!
What the Hell(Boy)? →

Three years ago, the strangest Marvel Studios movie hit theaters and completely changed the game for pretty much all other Marvel (and superhero) movies. Guardians of the Galaxy created a whole new set of Marvel fans, and took a bunch of characters that no one knew and made them into household names. Naturally, the bar has been set pretty damn high for the sequel, and while the surprises may be gone from the original, Guardians of the Galaxy Vol. 2 is still a solidly entertaining ride.

One of the strengths of Vol 2 is how disconnected it feels from the rest of the Marvel Cinematic Universe. Now I’m a huge fan of what Marvel Studios have accomplished with their films, but there does start to get a feeling of sameness among the more recent films, especially when we know that these films have to build to a larger goal (that would be Infinity War, in case you forgot). But Guardians Vol 2 doesn’t have any connections or major set ups at all for any upcoming movies. It’s probably one of the first straight up standalone continuations of a franchise within the MCU, with Winter Soldier or Iron Man 3 maybe being the exceptions.  There’s no need to have seen any of the MCU films between the original Guardians and this one, and James Gunn, free from having to set up the origin of the team, is able to set them loose on a crazy adventure.

That team is once again the heart of the movie. The film really connects whenever

Star-Lord (Chris Pratt), Gamora (Zoe Saldana), Drax (Dave Bautista), Rocket (Bradley Cooper), and Groot (Vin Diesel) are all together bickering with each other. Amazingly enough, Gunn is able to give each character a moment to shine as well. Just when you think you’re getting too much time with Star-Lord, up comes a great sequence for Rocket. Think there’s too much focus on Gamora and her rivalry with Nebula (Karen Gillen)? Well, here comes Drax to lighten the load. There’s a tricky balance at play here, and while the movie can’t give every plot point equal footing, the only thing that really feels a little shortchanged is the initial plot with the Guardians and the Sovereign, which sets everything in motion but quickly gets pushed to the side in favor of Kurt Russell’s Ego, who we know from the trailers is Star-Lord’s father.

Like nearly every movie he’s been in, Kurt Russell has a great presence in Vol 2, but it’s a little surreal to see him explaining major aspects of the cosmic side of the Marvel Universe (same goes for Sylvester Stallone, who’s in a VERY minor role). While Russell’s reveal as Peter Quill’s dad isn’t a spoiler, his overall actions in the plot are, so I’ll save that for now. I will say though that Russell delivers a pretty fun and layered performance, and I was actually pretty surprised by where his story went.

Also surprising? I didn’t get tired of Baby Groot. In fact, I ended up really enjoying the little guy. I had worried that he’d be too much of a good thing, but he’s used just enough to charm you. It’s hard not to grin when he’s dancing in front of you to “Mr. Blue Sky” during the film’s opening credits, which might actually be one of my favorite set pieces in the film. James Gunn choreographs some pretty dynamic action sequences throughout Vol 2, but the opening one that focuses on Baby Groot as a gigantic battle goes on around him is pretty stellar. 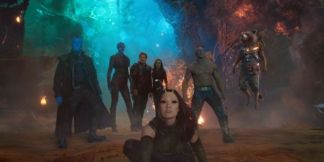 The entire cast is still having blast as well. Chris Pratt’s Peter Quill is still lovably cocky, and even has a few surprisingly sweet moments with his father. Zoe Saldana’s Gamora gets some closure with her sister Nebula, something that was one the only weak spots of the original movie in my opinion. Rocket gets the best action moments, and it’s kind of amazing that somehow Cooper’s voice acting as Rocket is one of the best performances he’s given in his career. But the real scene stealer is Drax, who gets some of the film’s biggest laughs. Dave Bautista really has a ball playing this character, and ends up delivering one of the best performances when he’s able to play off his cast members.

If there’s one thing to knock against Vol 2, it’s that there’s definitely a bit of a drag to the second act, which finds the Guardians split up amongst the cosmos. You have such a great time watching these characters interact together that when they’re not all in the same place the movie suffers. But when they come together for their big third act throw down, it’s incredibly entertaining. There’s also a few callbacks to the first film that don’t really work all that well, but there’s still plenty of new material here to make up for it.

In the end, Guardians of the Galaxy Vol. 2 may not have the surprise factor that the original did, but it’s still a very entertaining ride. It’s like the solid second album after a stunning debut. It may not have the same new sheen to it, but it still has enough great songs on it to be worth listening to. James Gunn has officially taken a weird side corner of the Marvel universe and made it one of the major aspects of the Marvel Cinematic Universe. He’s the rare talent that can create crazy ideas that still fit within the corporate structure of a big budget studio, and with the Guardians of the Galaxy he’s created a mini universe that is still fun to hang out in for two hours.

← Comic Reviews: Secret Empire and Bane Conquest!
What the Hell(Boy)? →