Now that the dust has settled on IvX, it’s time for Marvel to start revving up for the next installment of the X-Men franchise, RessurXion. Of course, this means it’s time for a special one-shot issue that will set the stage for the upcoming X-Men books coming your way next month. Featuring the creative teams behind almost every major title in the RessurXion event, X-Men Prime serves as the perfect book to get you back into the world of Marvel’s Merry Mutants, but if you’re looking for any jaw-dropping revelations, you’ll be disappointed.

X-Men Prime is anchored by Storm visiting Kitty Pryde in Chicago in an attempt to recruit her back into the X-Men fold. After the events of Extraordinary X-men and IvX, Storm is looking for a clean break, and thinks that Kitty is the perfect person to replace her as leader of the X-Men. This leads to revelations about the young time displaced members of the original X-Men team, a new threat waiting in the shadows for Old Man Logan and other characters associated with the Weapon X program, and a new home for the X-Men, located right in the heart of New York City.

Writers Marc Guggenheim, Cullen Bunn, and Greg Pak all share writing duties here, and while you can clearly tell which sections of the issue they wrote, it’s not so noticeable that it disrupts the flow of the issue. However, there is a major focus on the younger X-Men’s story in this issue than the other two series. While I’m intrigued by all three of the new ResurrXion titles, a more even spotlight for the books would’ve been appreciated here, as the one I was most interested in (Weapon X) has a pretty small page count.

Ken Lashley handles a majority of the art in this issue, and he does a great job. Many times artists can handle the human looking X-Men, but struggle with some of the more fantastical characters that make up the team. Not so with Lashley, as he’s able to create distinct designs for all members of the team, but also keep them within the designs we recognize. There isn’t a lot of action in this issue for Lashley to depict, but he does a tremendous job of showcasing life in X-Haven, and of depicting Kitty Pryde reminiscing on her time with the team.

X-Men Prime doesn’t contain any earth shattering revelations, but it serves as a nice “reset” of the X-Men after the past few years. There’s a lot of interesting things coming up for these teams, and Prime serves as a great way to check out what Marvel has planned.  It’s the perfect book for new and lapsed X-Men fans to get a taste of what’s to come. 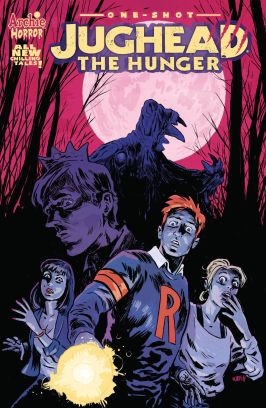 Archie Comics has become one of the stronger comic publishers, mainly because of their willingness to try new things. While their rebooted Archie universe has been a major success, my favorite imprint has been the Archie Horror series, which is home to Afterlife with Archie and my beloved Chilling Adventures of Sabrina.  Unfortunately, both of those series are plagued by delays. But luckily for us we have Jughead: The Hunger to hold us over. Where Afterlife focuses on zombies and Sabrina focuses on the occult, Jughead is focusing on the titular hamburger devourer turning into a werewolf.

The town of Riverdale is being terrorized by the “Riverdale Ripper”. Countless friends and townspeople have been killed by this mysterious monster, and no one can figure out who is behind it. And now Jughead has been waking up with strange cuts, bruises, and blood all over him. He can’t be the Ripper, can he? He’s always been hungry, but for human flesh?

Spoilers, he is. Frank Tieri is new to the realm of Archie Horror, but his story fits right into the world that Afterlife with Archie and Chilling Adventures of Sabrina created. However, as a one shot Tieri has to cover a lot of ground in a few amount of pages. There are numerous moments that would be awesome if they were given more time to breathe, including a revelation about Betty Cooper and her connection to the werewolves. As it stands in this issue, we’re given a quick explanation and expected to roll with the revelation. It’s not a major problem, but it does stick out a little when you think about it.

Like Tieri, Michael Walsh’s artwork fits in with the Archie Horror world. Walsh’s art is very reminiscent of Francesco Francavilla, albeit a little looser. However, this loose style serves this story really well, and Walsh has some truly incredible pages in The Hunger, the standout being the history of Jughead’s family of werewolves throughout the years.

The Hunger is a great little one and done story, but it seems like it’s in fast forward.  There are many moments that could’ve been fleshed out, and with the delays that have plagued Afterlife with Archie and Chilling Adventures of Sabrina you’d think Archie would want to have one book out there that would keep the Archie Horror imprint alive. Regardless, if you’re looking to get your fix of terror in Riverdale, Jughead: The Hunger is definitely going to do it.