← Let Me Take You For A Ride?
Gold and Blue Team Assemble! → 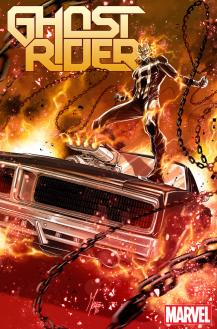 I’ll be honest; I wasn’t the biggest fan of All-New Ghost Rider. While I admired the art by Tradd Moore, the series that introduced Robbie Reyes to the world just didn’t do much for me. Maybe it was because Johnny Blaze will always be my favorite Ghost Rider, or maybe it was the fact that this time the Rider drove a muscle car instead of motorcycle, but something just didn’t click with me. Despite this, the Robbie Reyes version of the character has a pretty devoted following, and he’s returned with a brand new series written by Reyes create Felipe Smith, with art from Danillo Beyruth. Unfortunately this new series doesn’t do much to convince me to keep following this Rider’s adventures.

This new series is clearly designed to cash in on Robbie Reyes’ live action debut on Agents of S.H.I.E.L.D., but even if a bunch of fans of that show buy this issue, they may find themselves scratching their heads. Felipe Smith’s script doesn’t offer a lot of catch up. In fact, it doesn’t offer any background at all. By and large Smith assumes you’ve read the previous Ghost Rider series, and if you didn’t (or bailed early like me), all you get is the standard Marvel first page recap. Hell, I didn’t even know that the spirit possessing Reyes was his uncle, something that must’ve been covered after I stopped reading All New Ghost Rider. Leaving this much information in a recap page that a majority of people will probably not even read isn’t the best idea.

Smiths’ script bounces between Reyes’ life in Los Angeles with his brother and Amadeus Cho’s Hulk investigating a new alien life form. Now usually this is fine, but so much time is spent with Cho that this read more like a team up book than one starring Ghost Rider. In fact, now that I think about it, there’s more Hulk action in this book than Ghost Rider action. I’m all for having Marvel heroes interact with one another, but Felipe Smith’s script teeters dangerously into the “too much” side when it comes to the Hulk cameo.

While Danillo Beyruth is no Tradd Moore, his art is definitely just as dynamic. Beyruth’s style is a little cleaner than Moore’s, but it has the same intensity and sense of motion that the Luther Strode artist is known for. Beyruth has a lot of fun in the few Ghost Rider moments of the book, and he makes a car chase, something that should be impossible to do in a comic, tense and action packed.

Ghost Rider still hasn’t converted me to the Robbie Reyes camp. While there’s certainly plenty of room for this version of the character in the Marvel universe, at the end of the day there’s just some books that you can’t get into. Fans of Reyes will likely eat this issue up, but as for me, I’m going to wait it out for Johnny Blaze to come back.

One of the biggest problems facing Suicide Squad after the DC Rebirth event is arguably its greatest strength: Jim Lee. While the superstar artist has been delivering some truly awesome pencils with this book, the fact that Suicide Squad ships twice a month means that the main storyline has been stretched out longer than it needs to be, mainly because the powers that be at DC have decided to cut the issues in half. While this makes the scheduling a little easier on Jim Lee, it also means that Suicide Squad is still dealing with the fallout of the first storyline while other DC books are starting their third or even fourth storylines. Despite this, Lee and Rob Williams’ latest issue of Suicide Squad is worth your time, as long as you’re okay with the series’ now trademark abrupt endings.

Since Zod was released from the Black Vault, the entire Squad has been giving into their worst instincts and attacking each other. However, this has had the opposite effect on Harley, who is now completely sane once again. While this is great for the former psychiatrist, it also means that her chances of survival have plummeted, as she’s second-guessing the moves that she’d easily make if she weren’t so concerned with her survival.

This plot point is where a lot of this issue’s strengths lie, as Rob Williams has a lot of fun putting the “sane” Harley against her more unhinged teammates. The more famous member of this creative team has easily overshadowed Rob Williams, but without him we wouldn’t be getting a story this entertaining. Williams actually paints Harley in a pretty sympathetic light, as we know that as much as she loves being sane again, she’s going to have to revert back to her “usual” self. Really the only negative of this issue is the same negative of every Suicide Squad issue: it’s over way too soon. Sure, we get an entertaining back up story starring the Enchantress, but Williams brings up some really interesting ideas that are dropped fairly quickly in this issue (one of the better ones actually involves Enchantress and Killer Croc). A few pages devoted to some of the revelations of the team members giving into their baser instincts would’ve made them have an even greater impact.

There’s not much to say about Jim Lee’s art that hasn’t already been said. The man has, surprisingly, kept up with the Suicide Squad schedule, and aside from having a ton of inkers on the book; his style hasn’t suffered a bit. Of course there’s the aforementioned schedule shenanigans that DC worked out for Lee, but still, the fact that the man who’s name is synonymous with delays in the comic book industry has been able to keep going as long as he has on Suicide Squad is pretty cool, and gives me hope that he can do this kind of project again.

While Suicide Squad is still frustratingly truncated, it’s still a pretty fun book. I’m just not sure if it’s worth reading on an issue-by-issue basis. In all honesty this book is probably better served as a trade, where you don’t have to be cut off from the story every month and can just continue reading. As it stands right now, Suicide Squad is still pretty charming, even if it seems like the very thing DC is doing to help the book is now hurting it.

← Let Me Take You For A Ride?
Gold and Blue Team Assemble! →