← An Open Letter To AMC
Pop Culture Pick Me Ups → 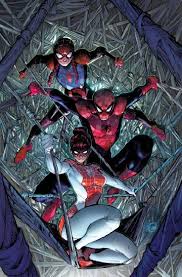 The Amazing Spider-Man: Renew Your Vows was one of the more successful Secret Wars tie-in series from last year, so it’s no surprise that Marvel would spin that series off into an ongoing. While this isn’t the return of the Peter Parker/Mary Jane marriage that many longtime Spidey fans have wanted (myself included), it does present a fun “What If” universe that isn’t that far off from what we currently get in the regular Marvel Universe. Under Gerry Conway and Ryan Stegman, Renew Your Vows has been hyped as Marvel’s answer to DC’s former Lois & Clark series, and while it has a lot of that series’ same charms, it’s also a pretty great debut for a new Spider-Man series as well.

What makes Renew Your Vows work so well is that with the exception of Peter Parker and Mary Jane Watson being married with a child, there isn’t that much that’s different in this universe from the 616 universe (sorry Marvel, I’m probably never going to call the current universe the “prime universe”). In fact, Renew Your Vows is a pretty nice reminder of what made Spider-Man so great in the first place. Gerry Conway’s script is so on point that if it was revealed that this was a reworked script that he scrapped in the late 90’s, I wouldn’t be surprised at all. Here Peter Parker is back taking photos for J Jonah Jameson at the Daily Bugle, married, and facing off with villains that you know and love.

Of course, one of the main appeals of this series is the fact that Mary Jane and little Annie Parker are in the superhero business as well. This could’ve gone off the rails and ended up being really corny, but so far Conway comes up with a great hook and reasoning for MJ and Annie being a part of the superhero business, even though we really don’t see Annie as a superhero just yet. There’s even a good reason for why Mary Jane is able to help Peter fight crime.

Ryan Stegman’s art dipped in quality when he was on Uncanny Avengers, but I’m happy to say that he’s back to his old self now with Renew Your Vows. Well, not entirely, as there are a few weird panels and poses, but for the most part Stegman’s style is exactly the one that I fell in love with on Superior Spider-Man. His pencils work wonderfully for both the quiet family breakfast and the crazy action set pieces, and I love his design for Mary Jane’s superhero costume. While I’m fairly certain that Stegman won’t be on the book for very long, here’s hoping that he’s able to keep delivering this kind of awesome work in future issues.

Amazing Spider-Man: Renew Your Vows was a blast to read, but then again, it’s well known how big of a Spider-Man fan I am, so your mileage may vary on the book depending on how much love you have for the character. To me, it was a great blast from the past that reminded me of the Spidey stories from my youth, but with an Annie Parker twist. I’m really excited to see what Conway and Stegman have planned for the rest of this series, and can’t wait to get the second issue.

After teaming up their comic book universes, the animated worlds of the Dark Knight and the Heroes in a Half Shell are now coming together. Once again, Batman and the Teenage Mutant Ninja Turtles have teamed up, and while Batman TMNT Adventures isn’t a sequel to the smash hit team up from last year, it’s definitely a super fun and unique comic for all ages.

The plot for this miniseries is almost exactly the same as last year’s Batman/Teenage Mutant Ninja Turtles. However, while that series had the Turtles and Shredder jump into the DC Universe, Batman TMNT Adventures has characters from both franchises equally jumping between universes. Clayface pops up in the Turtle’s sewers, and Two-Face has been talking about visiting a different universe after Batman has captured him. So far neither Batman nor the Ninja Turtles have joined forces yet, but it’s not a big deal because the book has a ton of charm that is impossible to resist.

Much of that charm is from Matthew K Manning’s script, which does a wonderful job of matching up the styles of both animated series into one coherent story. The interplay between the four turtles is a lot of fun to read, and the Batman scenes are exactly like you remember from the Bruce Timm and Paul Dini series. Manning’s caption boxes describing the characters is the perfect way to introduce young readers to the worlds of Batman and the Ninja Turtles, but I’d probably make sure to tell them that this is a special event and the two don’t team up all the time.

Jon Sommariva’s art does a great job of mimicking the style of TMNT Adventures, but when it comes to mimicking Batman: The Animated Series, his Batman stands out as the clear winner when compared to other Batman: TAS characters. That’s not saying Sommariva’s style is completely off the mark, though. He’s able to echo the Bruce Timm style, but also give his own unique look to it as well. Unfortunately though, this style only works on certain characters like Two-Face and Clayface. Other characters, Joker and Harley especially, look a little too off model. A lot of this may have more to do with Sommariva trying to make the styles of both universes meld together, though.

If you have a young Batman or TMNT fan that wasn’t quite ready for Batman/Teenage Mutant Ninja Turtles, then Batman TMNT Adventures is the perfect book for them. Hell, if you’re an adult and you love these characters this book is for you. There’s a great sense of fun and adventure to this book that is really infectious. If Manning and Sommariva keep it up, this may end up not only being a worthy sequel to Batman/TMNT, but also surpass it.

← An Open Letter To AMC
Pop Culture Pick Me Ups →