Once again, Image Comics has been putting out a seemingly endless stream of new first issues. Thanks to their new Image Plus magazine, there’s less of a risk involved in plunking down your hard earned cash if you’re curious about checking a new series out. While I’m always hesitant to throw yet another new comic onto my already bursting pull list, when I heard the pitch for Nathan Fairbairn and Matt Smith’s Lake of Fire, I knew I was in: Crusade era knights vs. Aliens! How could I say no?

Like many Image first issues, Lake of Fire is a lot of set up. After some intriguing opening pages that set up the aliens’ arrival in the French countryside, we’re introduced to Theobald of Champange and his companion Hugh. Recently knighted, Theobald is looking to assist Lord Montfort in his efforts to stomp out “heresy” in the country. Montfort, however, doesn’t want any assistance, so he has his best knight lead Theobald on a mission to a town called Montaillou, a voyage that will take the knights long enough that by the time they return, they’ll be done with their terms of service to Montfort. It’s not until later in the issue when the knights arrive in Montaillou that they finally start to learn of the “demons” attacking the small village, and get their first encounter with the aliens.

There’s a lot of ground to cover in Lake of Fire #1, but it’s all pretty necessary. At times Nathan Fairbairn’s script throws a little too much information into the issue, but it never becomes a boring info dump. All of Fairbairn’s characters, while common tropes of these kinds of adventure stories, are really interesting and written extremely well, and Fairbairn’s premise is one of those “why didn’t I think of that” premises that comes along every once in a while.

Artist Matt Smith’s cartoony style works really well for this series, even if some panels look a little rushed. His backgrounds of the French countryside are gorgeous, and the bug-like aliens that arrive have a great design as well. Speaking of characters, Smith does a great job of giving each character their own body language and facial expressions. You could probably read this comic without any words and still be able to figure out who’s who.

Lake of Fire’s first issue is very much a set-up issue, but the set-up looks to be leading somewhere very, very cool. Nathan Fairbairn and Matt Smith have crafted a really cool premise that pays homage to classic adventure stories, and has the potential to be something really unique too. I wouldn’t be surprised if this is the latest Image book to get a TV or movie deal. 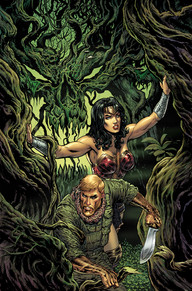 Greg Rucka’s Wonder Woman has taken a very different approach to the DC Rebirth shipping schedule. With alternating storylines per issue, it’s been an adjustment for those of us used to the typical superhero story telling methods. While it’s still too early to tell how this is working, it’s definitely made it harder to focus on the individual stories. While Wonder Woman may say “#5” on the cover, it’s actually the third issue of “The Lies”, the storyline that ties directly into the events in Wonder Woman Rebirth (even numbered issues have been telling the “Year One” story with artist Nicola Scott). Featuring art by Liam Sharpe, Wonder Woman is still teaming up with Cheetah to try and discover the mystery behind her messed up timeline, while Steve Trevor remains a prisoner of the Urzkartaga tribe.

Yup, not much has happened since issue 3 (again, the last installment of this story), and that’s the main problem with Wonder Woman. There simply hasn’t been enough forward momentum with the plot, which is one of the few negatives of the DC Rebirth line as a whole. Plus when you add in the fact that each issue of Wonder Woman alternates between storylines it becomes even more confusing. Perhaps there’s a connection between “The Lies” and “Year One” that we have yet to get to, but as of right now, all this publishing schedule does is make you confused.

At least Rucka’s writing is still good. Even with the drawn out storyline, Rucka’s Diana is still every bit as noble and courageous as she should be. Hell, I even enjoy his take on Steve Trevor, a character that I’ve never really cared about. While the main story still needs some forward momentum, Rucka’s character work still shines, and I love the interplay between Diana and Cheetah.

Liam Sharpe has been handling the art duties for the “The Lies” portion of Wonder Woman, and he’s been pretty damn phenomenal so far. This issue, however, has a few odd character features and darker shading. Perhaps there’s a new inker going over his art or a new colorist filling in the lines for him, but there’s definitely a small step down from what Sharpe’s been doing. Thankfully it’s nothing that ruins the reading experience of the book.

While Wonder Woman has some awesome talent behind it, I’m not convinced that the whole “alternating story lines per issue” was the best way to start up her DC Rebirth series. While it puts less pressure on the artists working on the book, it’s now created a needlessly confusing publishing schedule for fans. You either buy the even or odd numbered issues, or not at all. Wonder Woman, at least creator wise, is still one of DC best Rebirth titles, but this publishing schedule has the potential to really screw that up if the connection between both storylines isn’t revealed soon.