The first shots are fired in Civil War II #0, a comic that, quite frankly, is a bit of a bore. Much of Brian Michael Bendis and Olivier Coipel’s introductory issue serves more as an extended prologue than a rousing event starter, and it seems at times that it’s more interested in rushing to get the parts into motion for Civil War II rather than letting them happen naturally. For starting off a major Marvel summer event, that’s not good

This issue focuses on our three “leads” of Civil War II: Captain Marvel, She-Hulk, and War Machine. Bendis touches in on each of these individuals, showing us what’s going on in each of their lives. Captain Marvel is overworked from splitting her time between the Ultimates, A-Force, and Alpha Flight; James Rhodes has just been offered the position of Secretary of Defense in the White House,; and She-Hulk has just lost a case that has caused her to rethink the views of her friends. All three of these stories will probably end up being important towards the overall plot of Civil War II, but right now, we don’t really have much to go on. Sure, knowing what we know about CW2 and its plot centering on a being that can see the future, we can see why this stuff is in here, but like I said earlier, you can really tell that Bendis is rushing to get events and people into their proper places for Civil War II’s “official” start. Add in the new Inhuman Ulysses, and Civil War II #0 starts to feel extremely bloated and all over the place.

At least the issue looks great. Olivier Coipel is one of Marvel’s best artists, so having him draw Civil War II will at least ensure that fans of his will find something to like. Coipel fills the issue with impressive, poster ready images of Captain Marvel and War Machine, and he even makes something as seemingly boring as Carol Danvers meeting with Doc Samson look amazing.

If we’re counting this issue as the official start of Civil War II, it’s a bit of a dud. Certainly there needed to be some character set up and background info to lead into this event, but there also isn’t too strong of a hook with this series so far. Hopefully the start of Civil War II proper can remedy this. 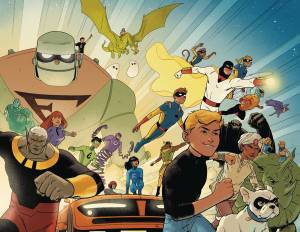 I can’t explain it, but I’m a big fan of Jonny Quest. I was in elementary school when the relaunched cartoon series started, and I instantly fell in love with the character and his cast. So you can imagine my surprise when DC Comics announced Future Quest a few months back. The first in their new Hannah-Barbera relaunch, Future Quest finds Jonny Quest and his crew teaming up with the Herculoids, Space Ghost, Birdman, and other Hannah-Barbera action heroes. With Jeff Parker and Evan “Doc” Shaner as the creative team, you’d almost think that this comic would be too good to be true. Thankfully that’s not the case.

Future Quest finds Birdman and his partner arriving at the Quest’s newest hideout. But before they can go over the purpose of their meeting, the group is attacked by- no, you now what? I’m not going to tell you any more. This is a comic that’s best enjoyed going in as fresh as you can. All I’ll say is that Jeff Parker absolutely nails the tone of the old school Hannah-Barbera cartoons. His script has a lot of fun making all these characters fit in with one another, and at no time does anyone feel shoehorned in.

On art duties, Evan “Doc” Shaner destroys it. He expertly mirrors the look of these characters and makes them all fit into one universe as well. Shaner delivers some killer work here, but the highlight is the book’s opening sequence. Those pages are extremely impressive, with a feel that is both epic and completely in line with the giant scale that this kind of series demands.

If you’re looking to scratch that nostalgia itch, I can’t think of a better comic to grab than Future Quest. Hell, even if you have no background with any of these characters this book is a fun read. Future Quest is so impressive that I’m amazed that Warner Bros hasn’t commissioned Parker and Shaner to turn it into a cartoon series. Maybe if you all buy it, we’ll get one.