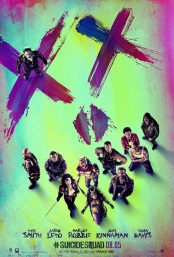 This week, WB and the CW aired their DC universe special, and with it, we got another look at the upcoming Suicide Squad movie. Yes, we had one trailer already, but since that was a Comic Con exclusive that was released after it was leaked online, this is the first real, legit trailer for the second film in WB’s DC cinematic universe.

Now, I’ll admit, when the trailer first started up and the sounds of Queen’s “Bohemian Rhapsody” started hitting, my initial reaction was…not pleasant. But that’s more because I’m a huge Queen fan and anytime their music appears in anything my first reaction is “why?”. However, as the trailer unfolded I was able to groove into the use of the song, and by the end, I was pretty damn impressed. There’s just enough information to interest “normies”, but not so much that we feel that we already know the plot of the movie (looking at you, Batman V Superman).

Not only that, but we also finally get to hear Margot Robie as Harley Quinn, and I have to say, I’m very happy with her portrayal of the character. While I was expecting a voice that sounded a little similar to her animated origins, it seems like Robie is going to do a great job embodying this character. She’s already stealing the show in the trailer, and it looks like she’s going to do the same thing for the movie.

The other members of the Squad look pretty sweet too. We get to see Will Smith’s Deadshot unloading his wristband guns, Killer Croc snacking on some thugs, and Jai Courtney’s Captain Boomerang….cracking open a beer. And that’s one of the best parts of the trailer. I mean, I’m actually excited for a movie with Jai Courtney in it. That’s NUTS.

Of course, the elephant in the room is Jared Leto’s Joker. Actually, it’s not Jared Leto’s portrayal of the Joker, but the fact that his Joker has tattoos. Yes, I’m still not over it, but I’d like to think that I’m more accepting of it than I was before. I’m sure Leto’s going to be awesome in the role, but I’d be lying if I said I would prefer him to not have finished taping an episode of Ink Master before going on his latest crime spree. I’m still holding out for a scene towards the end of the movie where Joker removes his ink, but at this rate, it seems like that will only happen in my imagination.

But anyways, it seems like Suicide Squad will be a pretty fun time this August. In a lot of ways, there’s more riding on this movie than Batman V Superman. Aside from Harley and Joker, Suicide Squad features a bunch of characters that many normies have never heard of, and as the second film being released in WB’s DC stable, if this one bombs, it won’t be pretty. But who knows? This could end up being the moodier older brother to Marvel’s Guardians of the Galaxy. We’ll find out in August. But for now, I’m going to go watch the trailer again.