Comic Reviews: All New All Different Avengers and The Goddamned! 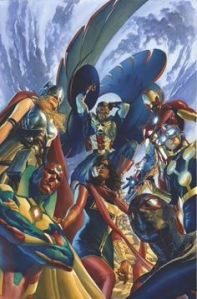 Arguably the flagship title of the All New All Different Marvel Relaunch, All New All Different Avengers faces a lot of hype. It features two comic legends writing and drawing the title (Mark Waid and Adam Kubert, respectively), and has the most diverse roster that Earth’s Mightiest Heroes have ever seen, featuring Sam Wilson’s Captain America, Kamala Khan’s Ms. Marvel. Miles Morales’ Spider-Man, and Jane Foster’s Thor. With so much hype around it, it would be nearly impossible for ANAD Avengers to live up to the hype, and it doesn’t. But while this opening issue doesn’t exactly blow you away, it sets the stage for some pretty fun things to come.

Like all Avengers teams, the roster in All New All Different Avengers happens by accident. Sam Wilson’s Captain America and Tony Stark run across Miles Morales, who just interrupted a Chitauri general’s arrival on Earth. The three team up to put the baddie down, but are quickly subdued, leaving us with a “to be continued” that appears halfway through the book.

Yup. Halfway through the book the main story gets a “to be continued”. But we do get a fun team up between Kamala Khan and Sam Alexander’s Nova that sets the stage for their arrival on the team pretty nicely. But I won’t lie; I would’ve preferred a double sized opening issue that featured the entire roster of heroes over this.

Despite the abrupt ending, Mark Waid continues his excellent writing streak with ANAD Avengers. Waid’s gift for characters is in full force here, and he expertly weaves hilarious exchanges between Stark, Wilson, and Morales. However, his team up story with Kamala and Sam Alexander is even better, even if it does have one too many cliché “teenagerisms” in it.

But as good as Waid’s characterizations are, I gotta say, this opening story is pretty weak. I can’t imagine Waid actually thinking ending this first issue where he does was a good idea, so I’m going to give him the benefit of the doubt and assume that Marvel decided to chop up the issue to squeeze more cash out of readers (yes, this comic is also $5).

On the art side of things, Adam Kubert’s art looks waaaaay better here than it did in AXIS, but there are still some weird facial expressions, particularly when Captain America is flying around. However, the other action scenes look really cool, my favorite being the fun twist with Tony’s car.

All New All Different Avengers isn’t exactly the huge story that I was expecting, but there’s enough potential here creatively that I’m not going to give up on it just yet. Hopefully the pacing issues have more to do with behind the scenes meddling at Marvel and less to do with Waid’s actual script. I really like this team and think that of all the All New All Different titles, this one has the best shot at being the best book of the line. With a little more work, it will be.

Jason Aaron reteams with his Scalped artist R. M. Guera for The GodDamned. Telling the story of the world before “The Great Flood” from the Bible, this is a brutal, dark, and crazy violent comic book.

Aaron and Guera are clearly having a blast being as insane as they want to be with this story. Taking a few verses from the Bible and running wild with it, this opening issue finds a nameless man waking up naked (to tell you who he is would spoil the fun), and setting out to take back the items stolen from him. Aaron’s script is chock full of pulpy goodness, and he’s crafted an extremely compelling spin on the extremely well known story of Noah and his ark.

Adding to the weird spin on this Sunday school classic is R.M. Guera’s art, which finds tons of beauty in this gross and disgusting world. Guera’s art is so good in this issue that even the sparse panels of our lead wandering the desert towards his enemies are engrossing. But the real highlight is his knock down drag out fight with the men who stole form him. Every panel of the conflict made me wince, but at the same time, the action in it is masterful.