Movie Review: The Death of Superman Lives: What Happened? 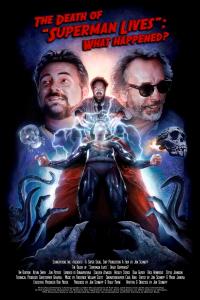 The Death of Superman Lives: What Happened? (2015)

Superman Lives is a comic book film that lives in infamy. There’s been numerous stories about the aborted Tim Burton Superman film, from the fact that it ballooned over-budget, to producer Jon Peters clashing with the developers, to Warner Bros worrying about Nicolas Cage being the right actor for the part of Superman. It’s a movie that sits on top of my “What If” movie list, and I’ve wasted countless hours on the Internet reading up everything I could find on this weird movie. Luckily, Metalocalypse creator Jon Schnepp is just as interested by this move that never was as I am, and he decided to devote years of his life to creating this kick-started documentary. Schnepp interviews everyone involved with the film (except for Nicolas Cage), from producer Jon Peters, first drafter Kevin Smith, the leagues of concept artists, and even Tim Burton himself, and at the end of his journey he’s found an incredible story about just how difficult it is to create a giant blockbuster film.

Much of TDOSLWH is conducted with interviews, and that’s where a lot of the fun comes from. Many of us have heard Kevin Smith’s story about producer Jon Peters’ desires for the film’s story (including a giant spider), and when Schnepp brings these up to Peters, his reaction is pretty hilarious. In fact, everything out of Jon Peters’ mouth is ridiculous, from the fact that he’s “from the streets” and “has been in 500 fights” to his reasoning for casting Nicolas Cage, In all honesty The Death of Superman Lives could’ve been 2 hours of John Schnepp talking to Peters and I’d be just as entertained.

However, there’s more people involved in Superman Lives than Peters, as Schnepp interviews the concept artists and subsequent screenwriters who were brought in to draft new screenplays for the film. The production team brought in numerous artists from all over the globe, including Superman comic artists who were working with DC at the time and Burton’s usual team of artists, Even fantasy illustrator Brom was hired to help with monster designs. Since there’s no actual footage from this film outside of costume tests, these concept pieces take up much of film , and they are stunning. Many of them aren’t even close to what comic fans know or think of when they think of the Man of Steel, but they’re definitely unique and would’ve been something interesting, and hearing the stories behind the pieces is really cool.

Schnepp’s interview with Tim Burton is extremely eye opening. Burton had a really interesting take on the Man of Steel that no one really would assume from the man who gave us Beetlejuice, ED Wood, and of course, 1989’s Batman. There are moments where Burton seems reluctant to talk (whether that’s because he’s uncomfortable or he just doesn’t want to upset people who could still finance his movies), but the moments where he does open up reveal a view of Superman as an outsider that’s something that we’ve never seen before in film. Sure, Zack Snyder touches on that a little in Man of Steel, but Burton would’ve made that the focal point of his take on Superman, and it seems like it would’ve been just crazy enough to work.

Speaking of Superman, the biggest missing piece from The Death of Superman Lives: What Happened? 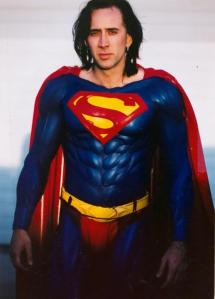 is Nicolas Cage. The actor has publicly stated that he doesn’t want to discuss the film anymore, which is a shame, because while there’s plenty of archived interviews from him in this documentary, it would’ve been really great to get him to go in detail about his take on Superman and Clark Kent, which we do see in this film. Yes, you not only see Nicolas Cage trying out multiple Superman suits (and hairstyles), you also get to see him work out his interpretation of Clark Kent.

To say that the costume test footage scenes are my favorite parts of the documentary is an understatement. While you may have seen the numerous photos of Cage as Superman, his eyes half closed in a weirdly molded suit with crazy hair, you still haven’t seen everything. In fact, that picture is brought up numerous times in the documentary as being the worst image to come out of the costume tests. When you see more of the suit and what he and Burton were attempting, you begin to see exactly what they were aiming for, and see that even though Nic Cage is a punch line now, he (and I’m saying this in all honesty) would’ve made a really great Superman, and an even better Clark Kent. It’s really a shame that he never got the chance to bring this version of the character to life.

Outside of a few weird reenactments, The Death of Superman Lives: What Happens ends up being one of the best documentaries about the film industry I’ve ever seen. It showcases the insane amount of work that goes into a giant tent pole film, and how easily it all go away when a studio gets cold feet. Obviously TDOSL:WH is designed for comic book fans, but it’s also a great documentary for anyone who’s into the film industry at all. You might think you know everything there is to know about this film, but Schnepp has done so much research that I was constantly surprised by it, especially when they get on the subject of Brainiac and who was going to be cast. Simply put, I had high hopes for The Death of Superman Lives: What Happened, and it did not disappoint. Don’t let this pass you by. It’s worth seeking out. At the very least, it shows us that while Burton and Cage’s movie would’ve been weird, it probably would have been better than Superman Returns.