Man, what a week to be a Marvel and Star Wars fan. First, Entertainment Weekly had a massive reveal for Force Awakens, and then Disney’s big D23 Expo was this past weekend, where they certainly brought their A game. From the first concept art of Doctor Strange to the reveal that Jurassic World’s Colin Treverrow will be helming Star Wars Episode IX, there’s no doubt that the House of Mouse will be dominating the pop culture landscape for years to come. Between their Marvel and Star Wars presentation, one has to wonder: how can anyone hope to match up against Disney? They have two of the hottest properties in the world right now in Marvel and Star Wars, and the latter hasn’t even had its new film released!

Disney sure knows how to get the nerd blood flowing though. Concept art for Doctor Strange has been shown, as well as a fun video greeting from Stephen Strange himself (aka Benedict Cumberbatch). Marvel Studios head honcho Kevin Feige then brought out the Sentinel of Liberty himself, Chris Evans (and Anthony Mackie) to introduce the first footage of Captain America: Civil War, which from what I’ve heard is friggin’ awesome (for real Disney, it would only help you if you borrowed a page from Lucasfilm and WB’s Comic Con footage and released the damn thing).

Of course, there was no way Disney was going to have a big showing of their live action slate and NOT show anything Star Wars related. And on that front, they did not disappoint. No, there was no new trailer, but we did get our first photo of the cast of Rogue One, the first Star Wars “anthology” film that will follow the Rebellion’s attempts to steal the plans for the Death Star. Judging from this picture, this is definitely going to be a grittier take on the galaxy far, far away, and it’ll be interesting to see how Godzilla director Gareth Edwards’ film fits in with the original trilogy we all know and love.

When it comes to The Force Awakens, we didn’t get any new footage. But we did get a brand new poster 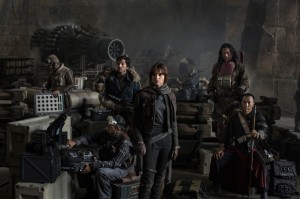 from legendary artist Drew Struzan. Depicting Han Solo, Rey, Kylo Ren, and Finn, the poster, like much shown with Force Awakens, hits the sweet spot of the first time you saw the box art for the VHS tapes of the original trilogy, and there’s even a pretty big reveal there too: Finn holding Luke’s lightsaber. Up until now, we haven’t had any indication that Finn was force sensitive, or even if he’s not, being able to even hold the weapon of a Jedi knight. This revelation has my mind reeling, as does JJ Abrams’ interview with Entertainment Weekly this week where he discusses many aspects of the film.

One of the key aspects that Abrams discussed was the fact that we don’t know the last names of Finn or Rey. It’s definitely something that Abrams says is “intentional”, and will “mean something” to people. Now, if I can put on my speculating hat for bit, those following Marvel’s fantastic Star Wars comic books know that it was recently revealed that Han was married before he met Luke and Leia (check out Star Wars #6). I’m calling it right now: Finn’s last name is Solo, and he’s the son Han never knew he had. And Rey? Her last name is ALSO going to be Solo, but she’s the daughter of Han and Leia. Making these two characters half siblings gives them a ton of story potential: they have a familiarity, a conflict, and a mystery to solve. It also keeps the Star Wars theme of “unknown siblings” from the original trilogy, but solves the mystery well before there can be any accidental incest.

Finn and Rey aren’t the only ones with an air of mystery surrounding them. Abrams also revealed some information about Kylo Ren, the mysterious cross-guard lighstaber wielding hooded figure. First off, yes his distinctive lightsaber is his own making, and looks the way it does because Ren isn’t all that great at crafting a lightsaber. Abrams has stated that Kylo Ren has a real name; the name that we know was “bestowed upon him by the Knights of Ren”, much like the way Anakin Skywalker was given the name Darth Vader by the Emperor. And speaking of Darth Vader, Abrams states that Ren is a “Vader fanatic”, and that he’s obsessed with the Dark Lord of the Sith. This also has me speculating over Ren’s identity, and the fact that he’s that obsessed with Vader makes me think of one name for Ren: Skywalker. Perhaps Ren is the son of Luke Skywalker, and he’s obsessed with Darth Vader because he’s heard the rumors that his grandfather Anakin turned to the dark side. After constantly being refused the truth by Luke, Ren seeks out answers on his own, which leads to his turn to the dark side. Oh and Luke? He’s gone into exile over the death of his wife, Mara Jade.

Of course this is all just wild speculation from me. It could be true, but in all honesty, I’m probably way off base. But no matter what, there’s new Star Wars movies coming out for us to obsess and speculate over. After this week, December 18th can’t come quick enough.