I won’t lie, I wasn’t expecting much from Star Wars: Lando, but after giving everything else Marvel’s done with Star Wars a try, I figured I’d give it a shot. And I’m glad I did, because this opening issue of the five issue miniseries from writer Charles Soule and artist Alex Maleev is one of the most entertaining first issues of the year. The two creators place Lando Calrissian front and center in a story that has more in common with heist flicks like The Italian Job than the original Star Wars trilogy, a twist that makes for one awesome comic book.

Taking place before Empire Strikes Back, Lando finds the soon-to-be mayor of Cloud City attempting to pay back debt he’s incurred from a ruthless crime boss. After obtaining a pricey jewel piece from an Imperial Governor, Lando and his partner Lobot believe their debt to be paid. However, the crime boss they owe decides that he’s only lowering their debt by 10%, but he’ll consider Lando’s debt paid if he can bring him a new star craft the Imperials have been working on. He’s even going to let Lando keep whatever’s inside the craft; all he wants is the shuttle. Sensing the bargain that he’s getting, Lando quickly gets a crew together to go after the shuttle, which unbeknownst to him belongs to Emperor Palpatine, who’s not pleased that his new prized possession is gone.

Charles Soule has crafted one extremely great opening issue. Soule’s characterizations of Lando and Lobot are both very humorous, but also right in line with what we’ve seen in the films. Soule expands on this relationship in a ton of ways that we never got to see in the original trilogy, hinting at heists the two have done over the years, and gives the two a playfulness that’s a ton of fun to read (not to mention he lets us in on what happens when Lobot drinks). Not only that, but Soule’s narrative hook for the series is, well, awesome. Taking Lando and having him lead a heist to clear a debt? That plot works so well that I’m surprised it’s not being used as a Star Wars anthology movie.

Alex Maleev’s art, like Soule’s script, is also very surprising. I was anticipating Maleev’s work here to be a little too sketchy, but it’s actually pretty tight and crisp. Maleev doesn’t try to make his characters look exactly like they do in the films, but at the same time they’re still recognizable. Where Maleev really shines though is drawing alien creatures, of which there are plenty of here.

If there was any doubt that Marvel and Disney were going to make full use of the Star Wars license, those doubts can officially go by the wayside with this week’s Star Wars: Lando. It continues the hot streak that Marvel’s been on with the Star Wars license, and I can’t believe I’m saying it, but I’m eagerly anticipating the next issue. I honestly can’t wait to find out how Lando gets out of this jam. To paraphrase a catchphrase Billy Dee Williams made famous, at this point buying a Marvel Star Wars comic is “always a good decision”. 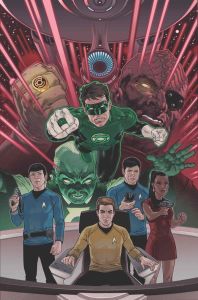 IDW and DC Comics continue their crossovers with Star Trek/Green Lantern, a new six-part miniseries that finds the Green Lantern Corps crossing paths with the crew of the (rebooted) Starship Enterprise. Mike Johnson and Angel Hernandez set the stage for this crossover extremely well, even if it is skewed more towards the Star Trek side of things than the Hal Jordan one.

Johnson’s script reads like a classic Trek adventure: the crew finds a Rogue planet and goes to investigate. While there, they come across a weird macguffin (in this case the corpse of a Guardian of Oa with different Lantern rings around him), and when they bring it back to the ship, strange crap starts happening. When they’re brought into conflict with Klingons, the different colored rings start attaching themselves to the crewmembers, and Hal Jordan arrives looking for the Guardian’s body.

Mike Johnson clearly knows the crew of the new JJ Abrams’ Star Trek well. The dialogue for Kirk, Spock, Scotty, and Bones is pitch perfect, and seeing them all react to the strange lantern rings is pretty awesome. However, the biggest flaw with Star Trek/Green Lantern is that it’s over right when things start to get interesting. You’re left wanting a lot more, which honestly, ends up being Green Lantern. He’s barely in the book.

On the art side of things, Angel Hernandez has some really great work in Star Trek/Green Lantern. The crewmembers all look like they do in the movies, and Hernandez does a great job capturing their different facial expressions. However, the Klingons look a little weird, and the final page reveal of Hal Jordan is also a little off. Despite these two issues, the rest of Trek/GL looks pretty damn great.

Star Trek/Green Lantern is absolutely worth getting for Star Trek fans, but if you’re a die-hard Green Lantern junkie you’re probably going to be left wanting. There’s some great set up here, but it reads like Johnson spent a little too much time with the crew of the Enterprise, and not enough with the Green Lantern Corps. There’s a lot of potential with this crossover that so far has yet to be realized. Hopefully the next issue can reach some of it.