Comic Reviews: Amazing Spider-Man: Renew You Vows and Batman Beyond! 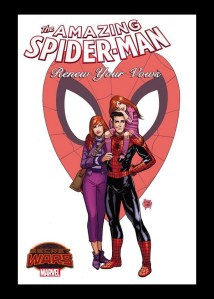 Remember how I said last week that Old Man Logan was my “most anticipated Secret Wars tie-in”? I lied.

Like many children of the 90’s, I have a soft spot for the Peter Parker and Mary Jane Watson marriage. For most of my comic book reading life, Spider-Man was a married man. While the events of One More Day lead to resurgence in the stories that Marvel was able to tell with the webslinger, I’d be lying if I said there wasn’t a part of me that longs for the return of the status quo that I grew up with. Thankfully, Secret Wars has me in mind, and this week sees the return of the Spider-Man marriage with Dan Slott and Adam Kubert’s Amazing Spider-Man: Renew Your Vows #1.

As with 90% of Marvel’s current publishing, Renew Your Vows is a Secret Wars tie-in, which means that the big selling point of this series (Peter Parker married with a daughter) isn’t part of the “main” Marvel universe. The universe of Renew Your Vows is very similar to the Marvel Universe we’re used to, except with some small costume differences for some of the supporting cast. In this realm of Battleworld (just think of it as an alternate universe), Peter Parker is married to Mary Jane, and the two have a newborn daughter. Naturally this puts a strain on Peter’s crime fighting career as Spider-Man, which is already stressful with the sudden disappearances of other street level heroes like Moon Knight, Daredevil, and The Punisher. Peter goes to the Avengers for help, but interrupts a meeting where they discover the source of the heroes’ disappearances: an “omega-level” threat named Regent. As the Avengers head out to stop Regent, Spider-Man learns that Venom is loose, and realizing that his enemy is most likely going to go after his family, Spidey engages in a knock down drag out fight to protect his loved ones that leaves him, and the world around him, changed forever.

Dan Slott’s script does an excellent job of presenting this new (to some) take on Peter Parker. Of course, this is no surprise since Slott has been writing Amazing Spider-Man for years now. At first I was a little concerned that Slott would have some trouble tapping into the pre-“Brand New Day” Spider-Man, but after the first few pages my concerns drifted away. Slott presents these new twists to Spidey’s life perfectly, and the moments he has with his child are extremely touching. The emotional investment he puts in at the beginning of the story become essential later on in the issue, when MJ and baby Annie are trying to keep away from Venom.

Adam Kubert handles Renew Your Vows’ art, and while he sometimes has some wonky facial expressions, for the most part his art is great. The fight between Venom and Spider-Man is easily the highlight of the issue. Kubert expertly shows Spidey’s determination to protect his child and the rage that Spidey feels at Venom for attacking his family.

Amazing Spider-Man: Renew Your Vows exceeded my expectations, and seeing Peter and MJ back together brought me right back to the Spider-Man titles I used to read as a kid. While it’s doubtful that this will be the status quo for Spidey after Secret Wars wraps, Renew Your Vows will be a fun story at the very least. Renew Your Vows didn’t read at all like I thought it would, and had a ton of surprises for me. Hopefully the other issues will be just as entertaining.

Batman Beyond has had comic book appearances in the past, but according to DC, this is the first time it really counts. Batman Beyond #1 is one of the first new “#1’s” in DC’s post Convergence minirelaunch, and the Dan Jurgens and Bernard Chang’s new ongoing has some surprises in store for fans of the character. Including a person behind the Batman Beyond cowl that isn’t Terry McGinnis.

I won’t spoil the identity of the new Batman, but I will say that much of this debut issue focuses on him constantly asking A.L.F.R.E.D., his AI program, to fill him in on the Gotham of the future, which has changed since Terry McGinnis traveled back in time in the Future’s End weekly series. As Batman investigates the new city, much of Dan Jurgens’ script becomes an info dump. There’s a quick battle with a Brother Eye infected Superman, but other than that, there’s not a whole lot to go on here.

Jurgen’s script is so focused on filling the reader in that he neglects to come up with a really intriguing story. There’s no clear motivation for this new Batman, other than exploring Gotham and constantly talking bout how different this looks from what he’s seen before. Batman Beyond #1 isn’t that new reader friendly either. Despite the “#1” on the title, Jurgens relies on the reader knowing about many of the events of Future’s End, which detailed how this new Batman Beyond came to be.

In terms of the art, Bernard Chang’s style isn’t what I was expecting for a Batman Beyond series, and while it took some getting used to, I ended up really enjoying it by the end of the issue. Chang’s depiction of the future of Gotham is really beautiful and dark, and his design for the Brother Eye Superman is pretty creepy too.

Batman Beyond was not the debut issue I was hoping for, but it’s got potential. If Jurgens’ scripts can balance action with exposition then Batman Beyond could grow into something really special. But for right now, it needed to come out swinging to really stand out. DC’s got a lot of new books hitting this month, and it would be shame for a title featuring Batman Beyond get lost in the shuffle.