To call Avengers: Age of Ultron a massive film is an understatement. Director Joss Whedon’s sequel to the megahit 2012 Avengers has to do many things: please comic fans and “normies” alike, set up the future of the Marvel Cinematic universe, and of course, serve as the follow up to arguably the biggest (and best) superhero film of all time. This is a tall order, and the hype around this film is certainly huge. After delivering one of the most entertaining films of last year with Guardians of the Galaxy, Marvel Studios has earned enough goodwill from fans that they could pretty much release a two and half hour film of the Avengers having game night and it would still make the same amount as a huge crossover come to life. So how does Age of Ultron stack up with the other Marvel films?

Yes, Age of Ultron isn’t quite as good as it’s predecessor, but it’s still a fantastic ride. Under anyone less than Whedon, the film probably would’ve crumbled, and while it stumbles a few times, the director makes a beautiful recovery that has me itching for more from Marvel Studios.

If you didn’t already know, Age of Ultron finds Earth’s Mightiest Heroes battling the sentient robot Ultron (James Spader). Created by Tony Stark (Robert Downey Jr., who can now play the role in his sleep) to “put a suit of armor around the Earth”, Ultron decides that the best way to protect humanity is to wipe it out. Naturally Thor, Captain America, Black Widow, Hawkeye, and Hulk don’t agree, and take the fight to Ultron, who’s backed up by Scarlet Witch and Quicksilver (Elizabeth Olsen and Aaron Taylor-Johnson). Oh yeah, The Vision also appears, and he’s played to perfection by Paul Bettany.

We’ve seen all of our major players before, and like RDJ with Iron Man, Chris Evans, Scarlett Johanson, 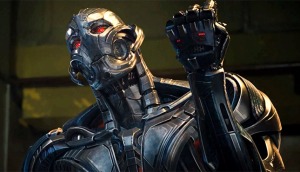 Chris Hemsworth, and the rest of the Avengers team cast are nearly synonymous with the characters they play. Newcomers Elizabeth Olsen and Aaron Taylor-Johnson are surprisingly great as the Maximoff Twins Wanda and Pietro (otherwise known as Scarlet Witch and Quicksilver). Taylor Johnson nails Quicksilver’s impulsiveness more than Evan Peters’ version in X-Men: Days of Future Past, and Olsen gives Scarlet Witch a suitably creepy vibe that plays in perfectly with her powers. However, James Spader’s Ultron is arguably THE reason to watch to the film. He gives the big tall robot a suitable amount of menace, but also gets to deliver some pretty hilarious lines that hit when you least expect them to.

With no need to bring the team together again, Whedon’s free to devote more time to Hulk, Black Widow, and Hawkeye, who’s given a lot to do this time around and a surprisingly touching back story. From an inspiring (and hilarious) speech to Scarlet Witch, to some supremely badass moves, the team’s archer actually steals the movie in a lot of ways. It’s clear that Renner’s wishes to be able to “do more” in the sequel were heard loud and clear by Whedon.

Ultron is packed to the brim with story and huge action sequences, the standouts being the opening scene, the Hulkbuster vs. Hulk fight, and the final battle against Ultron’s forces. However, it’s Whedon’s character moments and the chemistry between the cast steals the show again, especially the early scene where the team throws a party to celebrate their successful mission. It’s here, where the team is kicking back and relaxing with one another that Whedon’s in his element. Honestly, as incredible as it was seeing the Hulkbuster throw down with Hulk or Captain America battle Ultron, my favorite moment in the film was watching the team try to lift Thor’s hammer.

Of course, Age of Ultron is a part of the larger Marvel Cinematic Universe, so clues have to be laid to build up to the next phase of Marvel films. This is definitely where the film suffers, but it’s not a complete train wreck, and Whedon does an admirable job of inserting these moments into the film without sacrificing his story too much (if you’re a major Marvel Zombie like me, you’ll see these moments as a plus, and not a detraction from the story). If anything, the introduction of the Vision and Scarlet Witch and Quicksilver’s sudden change to the light side could’ve been fleshed out a little more, and some things are a little rushed towards the end of the second act, but by and large Ultron remains a solid film. There’s so many moving parts at play in Age of Ultron that frankly it’s amazing that the end result is as good as it is. Viewers who aren’t as well versed in Marvel Comics lore may be scratching their heads at some parts, but the Marvel Zombies in the crowd will lose their minds numerous times in this film.

It’s a bummer that Joss Whedon has decided to part ways with Marvel, but I’m not surprised at all that this is his last Avengers movie. After seeing this film it’s apparent that he gave his all making sure this movie not only told a compelling story, but also transitioned the MCU into the next phase. Rest easy, Mr. Whedon. You’ve earned it.