← The Age of Supergirl
Everyone’s Going To War → 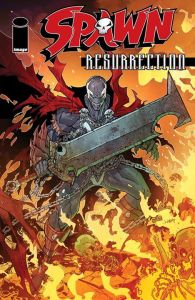 Like any child of the 90’s, I loved Spawn. However, like many people, I haven’t read anything featuring the character in years. In fact, the last issue of Todd McFarlane’s demonic superhero that I read was issue 200, which was pretty much incomprehensible to a lapsed Spawn reader like myself. Well, in steps Spawn Resurrection, a special one-shot issue by the new creative team of Paul Jenkins and Jonboy, designed to bring readers up to speed for the return of Al Simmons, the original Spawn. And I have to say, while it’s a very exposition heavy book, Spawn Resurrection succeeds in getting me interested in the character again.

This entire issue focuses on Al Simmons (the former Spawn who’s stuck in limbo after killing himself) talking with God. Taking the form of his childhood pet dog, God starts to instruct Simmons on his place in the world, and why he has been hunted by angels and demons alike: unlike them, he’s the only one who has the ability to choose his fate. Simmons is then shown the fate of his beloved wife, who is killed in a riot and now trapped in Hell. Determined to save her, Al Simmons grabs a bigass sword and decides to become Spawn once more.

Yeah, that’s the entire issue. And while it’s definitely lacking in the action department, there’s really no other way that this issue could’ve played out. Paul Jenkins’ script effectively sums up Al Simmons’ life and sets up an interesting status quo for next month’s Spawn #251. Could it have killed him to put a fight scene in here? No. But at the same time that would feel really out of place.

As good as Jenkins’ script is at getting me to care about Spawn, the real star of this issue is Jonboy’s art. I’ll be honest, I’ve never seen his work before, but after this issue, I absolutely love it. A mix between Spawn creator Todd McFarlane and Art Adams (with a dash of Ed McGuinness), Jonboy makes a huge impact with this issue, and I’m expecting nothing but big things from him in the future.

If you’re going into Spawn Resurrection expecting huge action, you’ll be disappointed. However, if this is your first time reading Spawn (or if you’ve lost touch with him over time), this is the comic for you. While it gets really wordy at times, it’s never boring, and Jonboy’s pencils are phenomenal. Plus, it ends with Spawn getting a massive sword and preparing to battle Hell for the soul of his wife. If that doesn’t get you pumped for Spawn #251, I don’t know what will. 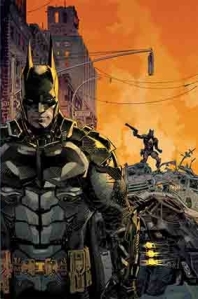 Videogame tie in comics are a crapshoot. For every Uncharted or Injustice, there’s a God Of War. However, Batman: Arkham Knight #1 features Batman & Robin writer Peter J. Tomasi, and is the official prequel to the upcoming Rocksteady game that I’m chomping at the bit to play. Thanks to Tomasi, Arkham Knight #1 scratches the itch, and ends up being a pretty solid tie-in comic as well.

Picking up on the very end of Arkham City, Knight finds Batman being silently pursued by the Arkham Knight, the mysterious villain who’ll be plaguing Batman later on this summer on the PS4 and XBOX One. Much of this issue deals with the fallout of Arkham City, which saw (spoiler for a four year old game) The Joker meet his end. However, Mr. J still has some tricks up his sleeve even in the afterlife, which includes sending out a video message offering a huge reward to whoever brings his body to Harley Quinn. Naturally, Batman goes to investigate, and the Arkham Knight follows him in the shadows.

Peter J. Tomasi’s script absolutely nails the tone and aesthetic of the Arkham series. His Batman sounds like the Batman from the games, and he even peppers in some fun references to other games in the series, like Arkham Origins’ Electrocutioner. The only thing that suffers here is the pacing of the book. Arkham Knight #1 collects the digital issues of the series, and since those are released in smaller chunks, they read a little strangely when put together. It’s not a complete deal breaker, but does take away from the book a little.

One aspect of Arkham Knight that definitely doesn’t suffer is the art by Viktor Bogdanovic. Fans of Greg Capullo on Batman are definitely in for a treat, as Bogdanovic’s style is very similar to Capullo’s. However, as similar as it is, it’s not a complete copy, as Bogdanovic is able to put his own spin on the Arkham-verse, and creates some really great action sequences as well.

Arkham Knight is definitely a must buy for those of us who can’t wait to play the game. Much like Paul Dini’s Arkham City comic book before it, Knight looks to fill in some of the gaps between City and Knight, and with Tomasi at the helm I can only expect good things. While this issue does some minor problems, there’s definitely enough here to insure that I come back for more.

← The Age of Supergirl
Everyone’s Going To War →