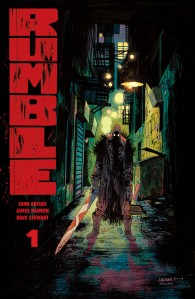 Yes, Image Comics has another new series out this week. However, John Arcudi and James Harren’s Rumble is different enough to make it stand out from the crowd of Image titles. A weird mash up of Conan the Barbarian, modern city life, and the supernatural, Rumble is definitely one of the stranger comics to debut this year. It’s also pretty damn awesome.

Rumble follows the exploits of Rathraq, a “Scarecrow Warrior God” who mysteriously reawakens in modern day, walks into a bar, and proceeds to start laying waste to everything in his path. After hacking off a man’s arm, Rathraq is quickly taken out by the barkeeper, but after that, things start getting weird. A lady’s cat jumps four stories out of his apartment, but is completely fine when he lands. Strange monsters appear and follow the barkeep home, who has foolishly decided to try to pawn Rathraq’s sword. Luckily (or unluckily) for our “hero”, Rathraq reappears, ready to throw down again.

John Arcudi’s script is pretty entertaining, and surprisingly funny as well. There’s a big sense of epic fantasy simmering just below the realistic surface. Rumble also isn’t afraid to poke fun at some tried and true genre tropes (the monsters’ interactions with humans being a prime example). If there’s one thing that can be improved on, it’s the exposition. While I understand Arcudi wants to keep some mystery to Rumble, it wouldn’t hurt to have SOME back-story on Rathraq, and why he’s so quick to fight everyone.

Something I don’t have any improvement notes on is James Harren’s art, which is extremely expressive. Harren’s layouts and design work are really cool, and Rathraq’s attack in the bar is so well done that you’d swear that the panels were moving. Speaking of Rothraq, Harren’s design work on the character is spectacular. It’s pretty simple, but very unique as well. While Arcudi’s premise will make you pick up the book, Harren’s art will guarantee that you buy it.

There’s not much else to the plot in this issue, and there’s more questions than answers, but isn’t that the point of a #1 anyways? Rumble has just enough uniqueness to it that I’ll definitely be checking out the second issue. Image has been on a tear lately with new quality releases, and it looks like Rumble could soon be added to that list. 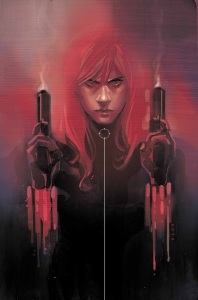 Black Widow has been one of Marvel’s unsung heroes since the first issue, and it’s a shame that more people aren’t following the adventures of Natasha Romanoff in her monthly series. Nathan Edmondson and Phil Noto have been delivering monthly spy action month in and month out, and Black Widow #13 is no exception.

Black Widow #13 focuses on Natasha getting revenge for the attack on her handler Isiah by the rogue terrorist group CHAOS. Writer Nathan Edmondson delivers a killer script that not only paints Natasha as one of the ultimate badasses of the Marvel Universe, but also as one of the most human characters. Natasha has a strong resolve to set things right, and also wants to make sure that the people in her life are protected as well. However, she’s still very guarded, and barely lets anyone in. This take on Natasha is extremely effective, and makes you really care for her as a character.

Also adding to the awesomeness is Phil Noto’s artwork, which works perfectly with Edmondson’s script. Noto delivers some of his best work here, with some absolutely killer depictions of the range of emotions that Natasha is feeling (but not necessarily showing). Noto executes the steps in Natasha’s revenge plan beautifully, and left me desperate for more.

If you aren’t reading Black Widow, you need to rectify that immediately. This isn’t just one of the best Marvel comics on the shelf, it’s one of the best comics out there period. Edmondson and Noto have been on an unstoppable roll since issue one, and it’s showing no signs of stopping anytime soon. If you’re looking for superhero espionage action then Black Widow is the comic you’re looking for.