10 (Comic) Books That Have Affected Me In Some Way 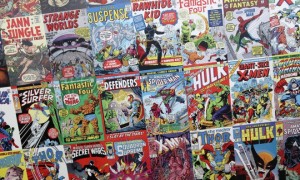 Recently my Facebook feed has been exploding with people listing ten books that have affected them in some way throughout their lives. I was recently tagged in a friend’s post, and while my response includes a healthy smattering of paneled pages within it, I’ve decided to try and start up my own spin on this social media movement, except this time focusing exclusively on comic books. IF there’s ever been a time to argue for the legitimacy of comics medium as a source of literature, it’s now. We’re currently in the middle of a comics renaissance, with books that have the potential to stand alongside classics like Watchmen, The Dark Knight Returns, and Stan Lee and Steve Ditko’s early Spider-Man work. IF you follow my on Facebook you’ve already seen my list, but if you don’t, here’s an expanded list of the ten comics that affected me, shocked me, and shaped me into the person I am today (oh, and give me an add on Facebook too if you feel so obliged). NOTE: Wondering why there’s now Walking Dead or Snyder/Capullo Batman? Those runs aren’t done yet. 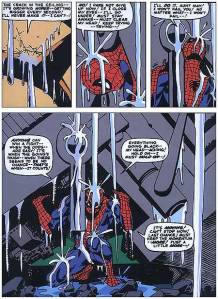 I received The Essential Spider-Man vol 2 in fifth grade, and foolishly believed that since Wizard magazine told me that issues of Amazing Spider-Man #’s 21-43 were worth big money that it MUST mean that this book must be worth at least $200.

It wasn’t. But while it wasn’t worth any money, the memories I have of this book are invaluable. While I had been reading Spider-Man comics since I was five years old, this was my introduction to the Stan Lee origins of the character. I was introduced to the Rhino, Mary Jane Watson, Scorpion, The Crime Master, Spidey’s battle with the Master Planner, and the shocking revelation that Norman Osborn was the man behind the Green Goblin mask. Nothing can top those days of reading, and re-reading, and re-re-reading this book.

2. Superman For All Seasons

Jeph Loeb gets a lot of shit these days (some of it deserved), but this four issue miniseries exploring Clark Kent’s years in Smallville before he becomes Superman is one of the strongest stories that Loeb has created with artist Tim Sale. Each issue focuses on a different season and person in Clark’s life, from his adoptive father Jonathan to his arch nemesis Lex Luthor. There’s not much in the way of story, but that’s not the point of this series. It’s to show how much of an impact Superman has had on the lives of ordinary people. The issue from Jonathan’s perspective is one of the most powerful Superman stories I’ve ever read, and Clark doesn’t even put on the red and blue suit. 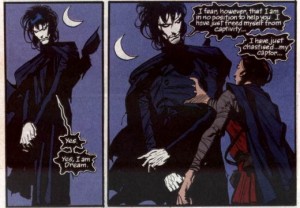 I’ll be completely honest; I didn’t read Sandman until last year. When I finished all of Neil Gaiman’s magnum opus, I completely regretted not reading it sooner. Sandman is one of those rare examples that lives up to the hype. It’s a comic that spans a wide variety of stories and genres, from horror to fantasy to comedy. Gaiman’s interactions between Dream and his siblings were hilarious, and it was refreshing to see that even beings like the Endless can act as selfishly as humans.

There are a lot of awesome moments throughout Sandman, but my favorite arc is in the fourth book, Season of Mists, where Morpheus travels to hell. Gaiman deliciously subverts your expectations in regards to Morpheus travelling to the underworld, and the ending to the story is absolutely fantastic.

Everything there is to say about Alan Moore and Dave Gibbon’s masterpiece has already been said.

5. The Amazing Spider-Man #248 “The Kid Who Collects Spider-Man”

“The Kid Who Collects Spider-man” from Amazing Spider-Man #248 takes a sledgehammer to your heart. What starts off as a simple story of a Spider-Man answering a young fan’s letter and visiting him takes a completely tragic turn in the final panels that sticks with you forever. Yes, it’s easy to say that this is just an excuse to re-explain Spidey’s origin for a new generation, but this is one of the first times that a Marvel comic book was not only surprising, but extremely touching as well. I remember using this story for my Graphic Novel unit when I was student teaching, and there wasn’t a dry eye in the house when I finished reading it.

I was 12 years old when I bought The Dark Knight Returns, and I was far too young to have read it when I did. Frank Miller’s tale of an elderly Bruce Wayne emerging from retirement to avenge his city is a haunting piece of dystopian fiction. Miller’s become a bit of a self-parody now, but this work forever changed the way I look at the Batman, and has left an extremely strong imprint on my brain.

Brian K. Vaughan and Pia Guerra’s Vertigo series is one of the greatest pieces of Science Fiction ever written. After a plague wipes out every single male on Earth, Yorrick Brown is the only one left. The reasons why he was spared are a mystery to himself and the readers, and watching his journey across an entirely new world is fascinating. The final issue of this series is one of the few times a comic has made me cry.

Mark Millar and Steve McNiven’s Old Man Logan is one of the greatest modern comics from the big two. Yeah, I said it. Sure, we’ve got more alternate futures than we can shake a stick at in the Marvel universe, but few have a hook that’s this good: the villains all gang up on the heroes, and win. It’s so simple it’s amazing that it hadn’t been done before. And unlike a lot of Millar’s work, this one not only sticks the landing, it gives us one of the greatest Wolverine/Hulk face offs of all time. McNiven’s art has never looked better than it has here, and we get a Venom Tyrannosaurus Rex. A VENOM TYRANASARUS REX PEOPLE!

For a dark time (let’s call it Freshman-Junior year in high school), I barely read any comics. Outside of my subscriptions to Ultimate Spider-man, Amazing Spider-Man, the odd issue of Batman, and Wizard Magazine, I barely kept up with the world of funny books. But all that changed my senior year. After picking up the “Avengers: Disassembled” arc, I was soon introduced to a new series picking up in the aftermath of the old Avengers team disbanding: New Avengers. A team that featured Captain America, Iron Man, Wolverine, and my hero, Spider-Man. Sure, Spidey joining the team went against his entire “loner” status, but after reading the opening arc, I was hooked. Watching Spidey, Cap, and a costume less Daredevil battling the just released hordes of the Vault blew my mind, and turned me back onto the Marvel universe in a huge way. In a lot of ways, it’s the reason I got back into comics so hardcore. 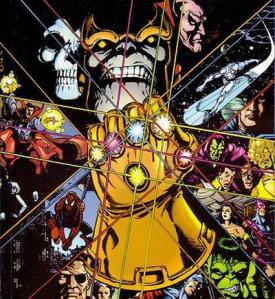 Jim Starlin and Ron Lim’s Infinity Gauntlet is not only the greatest Marvel event of all time, but it’s also one of the best gateways into the Marvel Universe. Every major character of the Marvel universe is featured, and while there are a few 90’s relics, it’s largely an easy to follow space epic that raises the stakes so much that it’s impossible for any event preceding it to match it. I had the single issues as a set from Toys R Us as a kid, and the fact that the heroes essentially fail at preventing Thanos from destroying the universe messed me up as a kid. Nothing, absolutely nothing can match Captain America standing up to Thanos, as all of his fellow Marvel Heroes lay dead or dying, and telling the Mad Titan that he knows he can’t defeat him, but that if fighting Thanos buys his allies even one second “it’ll all be worth it”.

A few years ago I reread the story, and it holds up so well that it’s not surprising that the unofficial word is that Marvel is going to build to this story in their movies. In the end, the very best Marvel crossover event could end up becoming the very best Marvel movie.