But guess what? It’s exactly like every other Batmobile that’s appeared in a Batman movie.

“But it has guns” you say. Hmm, you must have forgotten about the sequence from Tim Burton’s 1989 Batman film where Batman uses the batmobile to take out Axis chemicals? If you did, then I’ll forgive you for forgetting that the batmobile is outfitted with tiny machine guns. Or maybe you forgot about the tumbler in Batman Begins, whose missiles and rockets essentially help end Ra’s Al Ghul’s plot to blow up the city. Hell, even the bat-pod had missiles on it! Do you think Batman’s chase with the Joker in Gotham would’ve been as thrilling as it was if the bat pod was just bumping into empty cars?

Yes, the Batman is against guns, but it’s been referenced in the comics that if he does use weapons on his vehicles, they are always used in non-lethal ways. Rubber bullets are placed in the machine guns. Missiles are never used against living (or non-indestructible) enemies. He never, EVER fires on a vehicle that has people inside of it(see the chase scene from Dark Knight). Granted, I’ll give you the fact that the machine gun being used as a hood ornament on the new design is a bit overkill, but the fact that many comic and pop culture sites are freaking out over this and acting like it’s the first time a batmoblie has ever had guns is ridiculous.

Also ridiculous? People complaining about the lack of color on the batmobile. First off, ARE YOU KIDDING ME? He’s BATMAN. As in, the DARK KNIGHT. Of course his vehicle is going to be dark, and most likely, black. It has to blend in with the night, and be, you know, A STEALTH VEHICLE.

Look, I understand that people are very critical of Batman V Superman. Hell, I am one of those people. But come on, does everything from this movie need to ripped apart? The criticisms behind every new photo revealed is insane. To be honest, I’m shocked that people haven’t left the project because of it. 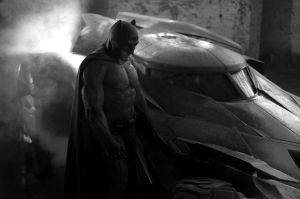 Everyone complaining that Batman “looks sad” or the batmobile is “too dark” need to take a step back and realize something:

Batman, unlike Superman, Wonder Woman, or anyone else in the DC universe, is a character that works very well when he’s depicted as dark and moody. You know why he “looks sad”? Because he saw his parents murdered in front of him as a child. You want to know why the Batmobile is black? Because he’s a friggin’ vigilante that can’t drive up to the nearest McDonalds and order a smoothie. I’m just as cautious about Batman V Superman as the next guy, but after a while the constant nit picking gets really old.

So what do I think of the new Batmobile? I think it looks pretty damn cool to be honest. Yes, the machine gun right in front is a bit much, but the rest of the design looks nearly identical to the Batmobile that will be appearing in the upcoming Batman: Arkham Knight videogame. Of course, THAT batmobile also has machine guns and missiles too, and the Internet had melt down over that as well.

Batman’s “no guns” rule gets a little tricky when he gets in his vehicles. It’s one of the only real inconsistencies with the character. But to immediately freak out and act like this is the first Batmobile to have weapons on it? Come on. Be real for a second. This isn’t the first time a Batmobile has had guns, and it won’t be the last. Find something else to complain about, like the fact that WB still isn’t connecting their TV and movie universes. Or the fact that Shazam won’t be connected to Dawn of Justice.  Of the fact that they’re making a Legion of Superheroes movie to compete with Guardians of the Galaxy.  Or….