← The Power Of Shazam!
To The Batmobile! → 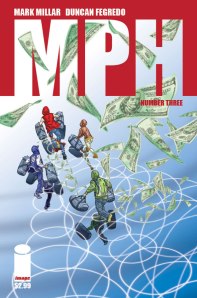 MPH #3 from Mark Millar and Duncan Fegredo finds Roscoe and his pals doing what a lot of young people would do if they discovered they could gain superpowers from a pill: they rob banks.

To be fair, they don’t rob banks because evil. They do it to get back at the bureaucrats and big businesses that have screwed over Detroit. In the course of a few days, they hit up 47 banks and amass such a large fortune that they decide to give away 10 million of it to the people of Detroit. While their supply of MPH may be gone in a few days, Roscoe and his pals are enjoying their time with it. Except for Baseball, who thinks that the White House holds the key to more stashes of MPH. He breaks in after taking a hit of cocaine, which messes with the MPH speed effect. Of course, the secret service finds him, which leads to a panicked Baseball taking the remainder of his pills, which causes his powers to become a bit more intense than his buddies.

Much of Mark Millar’s script focuses on Roscoe and his pals living it up and using their superpowers to help themselves. This is the “power” moment of their “with great power comes great responsibility”. They’re using their abilities for personal gain, and there’s no one to tell them that they should be using them to help others. Millar really nails the characterization of Roscoe in this issue and makes you side with him completely. He does tends to drag out the explanation for why Roscoe’s crew is hitting the super rich, but at the same time, you buy into it because Roscoe has had such a difficult life up until this point.

On the art side of things, Duncan Fegredo continues to absolutely dominate the panels. The scenes where Roscoe and his pals rob the bank are some really well crafted pages, and there’s some truly original and creative work being done on the visuals of the different heists they go on. Fegredo’s depiction of Baseball’s powers going into overdrive are really cool as well, and flow so well that it almost looks like Baseball’s going to fly off the page and into your room.

MPH, while delayed for quite a bit, is still worth your time and money. Mark Millar’s story of a bunch of disaffected youths with superpowers may seem like something you’ve read before, but it has enough original touches to make it not feel old. Not only that, but this issue ends on a pretty killer cliffhanger. Hopefully we won’t have to wait too long for issue 4. 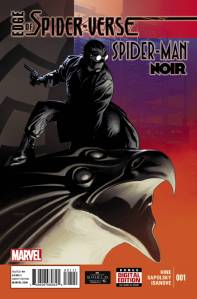 The upcoming Spider-Verse event gets a head start this week with Edge of Spider-Verse, a miniseries that will feature a different alternate reality version of the webslinger each issue. First up is Spider-Man Noir, who previously appeared in not only two of his own miniseries, but in the Spider-Man: Shattered Dimensions game as well. Written by the original Spider-Man Noir writers David Hine and Fabrice Sapolsky, and featuring art by Richard Isanove, Edge of Spider-Verse #1 is an awesome new adventure with this fan-favorite character.

Taking place after the events of Spider-Man Noir: Eyes Without A Face, Edge of Spider-Verse finds the Depression Era Peter Parker enjoying the World’s Fair with his Aunt May and lady friend Mary Jane. While there, they take in a show starring the great Mysterio, a magician who believes that the blood of the mystical “Spider-Man” can give him the power he pretends to have. After kidnapping Felicia Hardy, believing that her past ties can lure Spider-Man out, the two have their match. In front of a stage audience who believe they’re watching a show, Spider-Man and Mysterio match wits, until a mysterious enemy arrives and attacks Spider-Man. He’s barely able to survive until the Superior Spider-Man arrives and takes him to a safe location, where three other versions of Spider-Man are waiting for him.

That synopsis makes the issue seem like it goes by pretty fast. It does. However, writers David Hine and Fabrice Sapolsky’s story is still a lot of fun, and pretty accessible as well. Fans of the previous Spider-Man Noir tales will happy to find out what this version of the character has been up to since we last saw him, but at the same time it’s not necessary for new readers to have read the previous Noir series to be able to understand what this issue it about. Hine and Fabrice have crafted a fun done and one story that more than ably places Spider-Man Noir onto the playing field for the upcoming Spider-Verse event.

Richard Isanove’s artwork is pretty top notch here. While he may be lacking in some of the backgrounds, his art is moody enough to capture the grimy feel of New York City in the great depression. Many of the panels here feel like they could’ve been taken from a book about the time period.

So far Spider-Verse is off to a great start, and it’s a lot of fun to catch up with a version of Spider-Man that I didn’t think we’d ever see again. Fans who can’t wait for the upcoming Spider-Verse event should absolutely pick this issue up, but I’ll be honest, the one I can’t wait for is “Spider-Gwen”, who premieres in the next issue. Anyways, Edge of Spider-Verse #1 is a fun look into the world of Spider-Man Noir that should please fans of the original story and newbies alike. Is it essential to the upcoming Spider-Verse event? Probably not. But it’s a lot of fun.

← The Power Of Shazam!
To The Batmobile! →