Original Sin kicks off this week with a special issue showcasing the past of Uatu the Watcher. Written by Mark Waid with art from Jim Cheung and Paco Medina, this prologue finds Nova searching out The Watcher to find out just why he does exactly what he does, and what makes him so integral to the Marvel Universe.

After saving some oil workers from a giant Roxxon robot, Nova is met by the Avengers, who arrive just after the young hero has neutralized the threat. After hilariously admitting that he was surprised that the Watcher didn’t show up to witness his battle, Iron Man and Captain America inform him that the Watcher only makes appearances at grand, cosmic level threats. Of course, this prompts the young Nova to ask “why?” and when he can’t get an answer from the Avengers, he decides to fly up to Uatu’s home base and find out. While there, Nova learns the Watcher’s history, and gets to ask him an extremely important question.

Waid’s decision to focus on the young Sam Alexander Nova is an interesting one, and I’ll admit it didn’t initially make me very excited to read this issue. However, by the end I was very surprised to find how much I enjoyed this issue overall. There are a lot of emotional moments not only from Sam’s brief history as Nova, but also in the Watcher’s back-story as well. Waid’s script casts the Watcher in an entirely new light, and I was very impressed with how much I responded to this new way to view a character that has always been, well, in the background.

Jim Cheung and Paco Medina handle the art duties, and they are fantastic. Cheung is an artist that hasn’t been in a lot of current comics (probably because he takes a long time), but anytime I see his name on a book, I know it’ll be stellar. His splash page showing the different worlds and realities that the Watcher keeps track of is stunning, and gets bonus points for including the “New Fantastic Four”.   Medina’s pages work extremely well with the rest of the book, and to be honest, if I hadn’t looked at the credits on the first page, I wouldn’t have known that he helped out on the book.

Original Sin #0 won’t give you any insight into next month’s Marvel summer event, but it will give you a better idea of who The Watcher is, and is a good introduction to the new Nova. Those looking to jump into the Marvel event that have little to no knowledge of the Watcher should probably pick this up, as it does a very nice job of filling you in on the character that will be the focal point of Marvel’s “next big thing”. 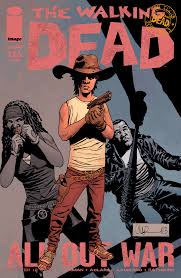 This is it! The finale of “All Out War” is here! And I have a feeling some people are going to be pretty pissed about it. I myself? It wasn’t what I wanted to see happen, but I still enjoyed it.

Robert Kirkman has always enjoyed subverting expectations in The Walking Dead, and here he subverts them by NOT doing what we want him to in this finale of the latest story arc. While I don’t completely buy Rick Grimes’ new stance on killing in this issue, I will admit that I’m happy to still have a certain bad guy around, and I also think Rick’s decision will come back to bite him later on.

One thing I don’t have any questions about is Charlie Adlard’s art. He’s absolutely on fire here, perfectly capturing the chaos of the battle between Rick’s survivors and the Saviors at the beginning of the issue. The fights are extremely brutal, and Adlard displays a great knack for pacing in these scenes. He may have had a few bumps in the road quality wise throughout this story, but this issue is top notch.

The Walking Dead’s major story arc is over, and puts our heroes in some pretty interesting scenarios that I’m interested in seeing play out over the next few months. “All Out War”, for the most part, was a lot of fun, with only a few moments that seemed like padding. Would I have liked to see a major, status quo altering death? Yes, but looking back on The Walking Dead as a whole, many times those deaths come when we least expect them. To me, “All Out War” was a very solid entry in Robert Kirkman’s continuing saga, and I can’t wait to come back next month to see how Rick’s decision pans out