A weekly comic series is always a risky endeavor. Storylines could peter out, interest may wane, or, god forbid, the series could be canceled before it even finishes. I’ve never been one to follow them before.

But then I read the first issue of Batman Eternal, the first of three planned weekly series from DC. With a crew of storytellers with the names Scott Snyder, James Tynion IV, Tim Seeley, and John Layman, and with an opening arc featuring art from the fantastic Jason Fabok, THIS is how you start off a weekly series, and fire up interest.

The opening issue of Eternal finds new recruit Jason Bard arriving from Detroit in Gotham City. James Gordon has hired him for the Gotham Major Crimes Unit, but when he arrives, Gordon’s not there. Instead, he meets Harvey Bullock and the other members of the Gotham City Police Department, who quickly give him the rundown on Gotham. Where’s Gordon, you ask? Oh, just assisting Batman with a hostage situation involving Professor Pyg. Seeing these two work together is a ton of fun, and reminds us that we haven’t really seen Gordon and Batman teaming up for a crime situation in a very long time. However, things go south very quickly for Gordon, as….well you know what, I’ll save it for you to find out. I will say that I was stunned at what happens, and I’m very interested to see how it plays out in this series.

Gordon and Batman’s team up is one of many fist-pumping moments in this debut issue. Snyder and Tynion clearly deliver the goods here. There’s not a moment that feels out of place. In fact, there are a lot of great character moments sprinkled into the action, like when Gordon is yelling at Batman to get to the scene to help him and to “take the first shortcut he finds”, or Batman offering to stay behind at the crime scenes’ end. Eternal has a lot of heart and believable character interactions, which is something that’s been missing from the DC universe since the New 52 relaunch.

You thought I wasn’t going to mention the art, didn’t you? It’s Jason Fabok you fool; of course I’m going to mention it! I LOVE Fabok’s artwork, and the pages he delivers here are top notch. Fabok gives a very cinematic feel to the events in this book, and while his characters do look a little static at times, he’s now solidified as one of DC’s top talents with this book. If I could marry the art in this, I would.

Batman: Eternal did the impossible: it’s made me want to pick up a weekly book. Time will tell if there’s enough story to keep this going for an entire year, but if the following issues are half as good as this one, I’m in. While a 52-issue commitment is a hard decision to make, Batman Eternal’s first issue makes a strong case for this series earning a spot on your pull list. 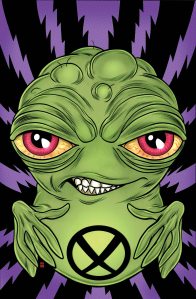 Doop FINALLY gets his own series in All-New Doop #1. Okay, it’s not an ongoing, but it’s still Doop, and as expected, it’s really, really weird.

Written by Doop co-creator Peter Milligan with art from David LaFuente, Doop finds the Jean Grey School’s janitor/substitute teacher/secretary forcing his way into different Marvel events and storylines that he seemingly had no part in. This month we find him “travelling through the margins” of the recent X-Men event “Battle of the Atom”, on a quest to find Kitty Pryde and get her to read his very important letter.

Peter Milligan’s script definitely doesn’t take itself too seriously, and because of that, this book is a lot of fun. Milligan gleefully makes fun of the recent X-Men mega event, and the fact that Doop isn’t a huge, well known X-character. If there’s one thing that could’ve been done better, it’s the accessibility for new readers. Unless you’ve previously read “Battle of the Atom”, you will have no idea what’s going on in this issue. Doop drops in and out of scenes from the event (literally, he actual goes through the margins of the panels to jump ahead in the story), and the book jumps to the scenes without filling the reader in.

The art from David LaFuente is great. I’ve never been a huge fan of his in the past, but he does a fantastic job with this issue. His cartoony style has been amped up just a little bit to make it fit more with Doop’s world, and actually works well with the characters from “BoA” that we’ve seen already.

I had a lot of fun with All-New Doop, and the ending of the issue left me wanting a lot more. The reveal behind what’s in Doop’s letter isn’t exactly that surprising (in fact I guessed within the first few pages), but it’s still a funny revelation, and makes you feel for the little green potato looking guy. Plus, if this gets me closer to my dream of a Marvel Team-Up book starring Doop, then I’ll gladly consider this money well spent.