“The Trial of Jean Grey” starts in All-New X-Men #22.NOW, and I gotta say, this opening issue is pretty fantastic. The fantastic Stuart Immonen is back on art, and writer Brian Michael Bendis’ script is an excellent starting point for not only the new storyline, but for new readers as well.  The big events of the past 21 issues are quickly recapped in the typical opening “previously in…” Marvel page, and at no point is anything referenced that would cause a new reader to go “wait, I’m confused”. I may hate seeing a giant “#1” on an issue that also has the actual issue number on it, but if it gets people to check this out, I’m okay with it.

Unlike the previous All-New arc, the first installment of “The Trial of Jean Grey” doesn’t meander, even though it seems to start off like your typical All-New filler issue. There’s Beast in the lab, new member X-23 fighting in the danger room, Cyclops, Angel, and Jean eating in the New Xavier School cafeteria, and Ice Man making snow angels outside and singing Run DMC.  Typical stuff.

But then the alien attack happens, and my god, does the book kick into overdrive. It’s pretty brief, but the few pages that feature the young X-Men battling these alien invaders are awesome, and showcase Bendis’ spectacular characterization of these teen mutants. I loved Beast’s reaction to finally meeting other alien life forms, and Bobby’s heroic attempt to rescue Jean from their clutches was very gripping.

The cafeteria scenes early on in the book are prime examples of why Bendis has been so successful on All-new X-Men. At first, it seemed like these scenes were going to be a slog to get through, but once we get into the meat of Jean and Cyclops’ conversation it becomes really fun, especially when we have to guess at what Cyclops is thinking that’s making Jean so upset.  The most interesting aspect of this series has been the young Jean Grey learning about what lies ahead of her, and this book gives us some insight into just how she’s handling it (assuming she’s not saving face in front of her friends, of course).

Yes, the other artists on this book have been fine, but none of them hold a candle to Stuart Immonen, who draws some of the best characters in comics.  Immonen has such an amazing gift with art that scenes where two X-Men are talking are just as dynamic as scenes where they are fighting.  There are some amazing panels in this issue, from the arrival of the mysterious alien race that abducts Jean, to the aforementioned scene of Ice Man attempting to rescue his teammate. And just wait until you’ve seen the final splash page with the Guardians of the Galaxy. Immonen, you are a god among men.

So yeah, I really enjoyed All-New X-Men #22.NOW. It lived up to a lot of my expectations, and while I would admit that it’s over a little too soon, that complaint is quickly taken away by the fact that part two (in Guardians of the Galaxy #11.NOW) hits stands next week! Between this issue and last week’s Thunderbolts #20.NOW, Marvel is doing an excellent job creating new jumping on points for people. The X-Men and the Guardians have never crossed over before. You want to know how it’ll go? Pick this up now and start to find out! 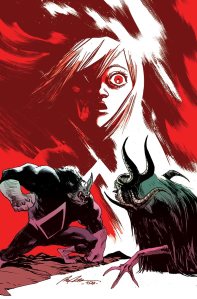 Animal Man is a book that I was trade waiting, until the news broke that issue 29 would be the end of Buddy Baker’s solo series. After hearing that, I quickly ran out and caught up on the adventures of Buddy Baker post-Rotworld, and I have to say, I’m extremely glad I did (especially since it takes DC eons to release their trade collections).

Animal Man has been filled with crazy, extremely out there moments matched with very personal ones, and issue #27 continues this tradition.  As Ellen Baker deals with paparazzi hounding her over the disappearance of her daughter, her husband Buddy’s battle with the fallen Red Elder rages on in the Red. This fight is easily one of the weirdest things I’ve seen in this series, but it’s still filled with some fist pump moments that will make you scream with excitement. Hell, even a dumb villain like Brother Blood has become a creeptacular bad guy in his New 52 reinvention, and his obsession with controlling the Red has made him into a pretty cool foil for Animal Man.

Adding to the creep factor of this issue is Rafael Albuquerque’s art. Filled with weird, grotesque creatures that have horns, bones, and other kinds of protruding elements hanging off of their bodies, Albuquerque’s creature designs definitely add a few notches to Animal Man’s “grotesque” factor.  As weird as his figures may look, they are completely in line with the style that a book like Animal Man needs, and makes the American Vampire artist the perfect fit for Lemire’s script.

I’m going to be really sad to see Animal Man go. It’s consistently been one of DC’s strongest titles, and its weirdness is really refreshing.  Lemire and Albuquerque have been doing a hell of job working on this series, and all signs are pointing to them ending on a high note.