Movie Review: The Hobbit: The Desolation of Smaug 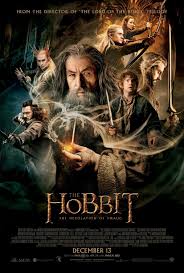 Now this is more like it.  The second film in The Hobbit trilogy has more action, more excitement, and well, more things from Tolkien’s original story than the last,and while there’s a large chunk of original material, none of it seems too out of place. The previous adventure with Bilbo and his company of dwarves was fun, but dragged considerably in the first hour. With The Desolation of Smaug, the action picks up right away and carries throughout the film. There’s a few pacing problems in the middle of the film, but for the most part this installment never lets up in the action department.

Smaug covers Bilbo Baggin’s (Martin Freeman) journey into Mirkwood forest, meeting Bard the Bowman (Luke Evans) in Laketown, and his encounter with the titular dragon (Benedict Cumberbatch). We also get some insight into Gandalf’s (Ian McKellan) investigations into the Necromancer, who’s not very subtly revealed to be Sauron (spoilers for a well-known book, I guess). This isn’t covered in the original Hobbit story, but I’m glad it was included here. While it does pad out the narrative, if they followed the original story and had Gandalf leave and not show what he was up to it would make for an awkward transition. Besides, more Ian McKellan is never a bad thing.

The action set pieces in this film are stunning. From the new take on the dwarves’ barrel escape from Mirkwood, to Smaug chasing Bilbo and the dwarves through the lonely mountain, there’s no shortage of awesome special effect set pieces in this film. The standout for me was easily the escape from Mirkwood, with Bilbo and co. being attacked by Orcs, while the Mirkwood Elves seek to protect their captors and their home from the invading forces. This sequence truly needs to be seen to be believed, and features some awesome elvish fighting from Legolas (Orlando Bloom) and Tauriel (Evangeline Lilly).  The former particularly stand out, as he jumps from barrel to barrel, taking out orcs on the way.

Speaking of those two elves, they really steal the show. While not in the original novel (Tauriel isn’t even a Tolkien creation), they really add a lot to the movie, and Evangeline Lilly was fantastic as Tauriel. I had my concerns about her character from the trailers, but she blew me away by how awesome she was. Same goes for Orlando Bloom, who looks to be having a blast playing the role that gave him his career again. Purists may balk at the inclusion of these two characters, but I for one thought they were a great addition. If we’ve got to pad these bad boys out to 3 hours each, you might as well do some cool stuff.

Martin Freeman’s Bilbo continues to be extremely charming, and even pretty funny as well. Watching this little Hobbit discover his courage while up against unbelievable odds is a lot of fun, and seeing the power the ring is already starting to exude over him is foreboding, because we know more about that tiny piece of gold than he does. Luke Evans’ Bard the Bowman isn’t in the film much, but he’s clearly going to play a much bigger role in next year’s There and Back Again. Richard Armitage’s Thorin continues to be a pretty bad ass little dwarf, and Ian McKellan could read the phone book as Gandalf and I’d be happy.

While all of these characters are great, they pale in comparison to Smaug.  Easily the best dragon I’ve seen on screen, Smaug is bigger than you can even imagine, and the performance by Benedict Cumberbatch is absolutely fantastic.  Motion captured and voiced by the actor, Smaug continues to push the limits of seamless CGI that was started by Lord of the Rings with Andy Serkis’ Gollum.  The small facial ticks and movements that the dragon does while talking are fantastic, and add to the realism of the creature. When he fully reveals himself to Bilbo my jaw dropped.  We’ve all seen dragons in movies before, but never like this.

At this point, Peter Jackson can direct a Middle-Earth film in his sleep (and some my say he has).  While I’m still not sold on the fact that this story needed to be three films (I think two would’ve been just fine), I’d be lying if I said I didn’t have a fun time watching Desolation of Smaug. Viewers who haven’t read the novel will be pretty upset with the cliffhanger ending, but come on, if you’d read the book, you have an idea of where it can end. If you’ve seen Unexpected Journey and were upset that the more exciting moments of Bilbo’s journey were left out, fear not, as this is the film you were waiting for.
Verdict: A-