← Bring On the Bad Guys
Movie Review: Man of Steel! →

Superstars Scott Snyder and Jim Lee turn their attention to the Man of Steel this week, just in time for the release of his new movie.  For fans of Clark Kent who have been waiting patiently for a title worthy of the Last Son of Krypton, the wait is over. Centered on an intriguing mystery involving falling satellites, the first issue of Superman Unchained delivers on all fronts, and is the first time I’ve been excited to read Superman in a very long time.

The plot for this first issue mainly lays the groundwork for the story to come. Satellites are mysteriously falling to Earth, and Superman is on a mission to find out why. Opening with the Man of Steel fiercely battling a sentient satellite, there’s no shortage of action in this issue. Seeing Clark juggle battling the craft, rescuing the astronauts inside, and making sure they don’t burn up entering Earth’s atmosphere was extremely fun, and actually makes you question if Superman will be able to pull off the rescue. After touching base with Lois, who informs him about another satellite that was knocked into the ocean, Superman goes to investigate, leading us to our big cliffhanger for next issue.

That may sound like there’s not a whole lot of plot for this issue (and in fairness, I kept it spoiler free). While some may argue that this may be the case, the real strength here lies in Scott Snyder’s strong character work with Superman and his cast. Just like in Batman, Snyder shows that he has an incredible sense of what makes his main character tick. I loved the moments during the satellite rescue where Clark has to remind himself of comforting the astronauts, or that the crashing satellite has super strong tentacle arms. Just because Superman is physically impervious, he still has the potential to make mistakes like us.

If there’s one thing I wanted more from in this issue, it’s some catch up on Superman’s supporting cast. This is largely due to my casual knowledge of Superman in the “New 52”, but I would’ve liked a little more on why Clark left the Daily Planet, and where he stands with Lois right now.  The scenes between the two are really good; I just wanted more of them.

One thing I couldn’t get enough of was Jim Lee’s art. I’m a huge fan of his, and seeing him do massive action scenes will always put a huge smile on my face. Apparently DC thought the same, as they’ve included a massive pull out splash page that doubles as a poster (and doesn’t require you to unstaple the comic to get it out either). Sure, it’s a gimmick so you buy more copies, and pretty ridiculous to try and read (yes, it’s part of the story), but at the same time, it put a giant smile on my face.

The back up story by Snyder and Dustin Nguyen is good, but there’s not enough to really justify its inclusion here. It’s only about four pages, and feels tacked on. I would’ve rather had a few more pages of Snyder and Lee’s main event, but that’s just my opinion. Hopefully in the issues to come the back up will be given a few more pages to grow.

Superman fans, time has come. Not only is Man of Steel arriving this week, but you also get a brand new series from two of the best creators in comics starring your boy in blue. Superman Unchained is a book that will please die hard and casual Superman fans alike, and I’m beyond excited to see what Snyder and Lee have planned for us. Here’s hoping Man Of Steel leaves me feeling the same way. 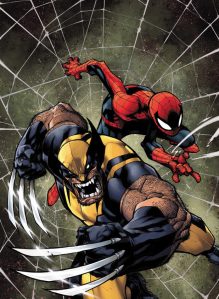 Oh Joe Madureira. Avenging Spider-Man was supposed to be your big return to comics. But, after 3 issues, you jumped ship, breaking not only Marvel’s heart, but mine as well. Well, I’m glad you’re back, but I’d be lying if I didn’t say I’m not expecting you to bail on me again.

Savage Wolverine #6 reteams the original Avenging team of Zeb Wells and Joe Mad in a story that feels like it was originally planned for the Spider-Man team up book. Elektra is after the Kingpin, and turns to Wolverine for assistance. Of course, there’s more to this than meets the eye, and Logan is quickly embroiled in something far bigger than just “time to help Elektra kill someone”.

Wells’ script jumps around a lot, but you’re never lost. In fact, I kind of liked how Wells kept the pace going, and if you’re a fan of Joe Mad’s art, you really get a lot of characters for your $4. This issue alone features Wolverine (in his brown and tan costume!), Elektra, Spider-Man, Captain America, Spider-Woman, Kingpin, and others. There’s also some cool looking new baddies as well.

I really enjoyed this issue, but it definitely feels like something Marvel is publishing just to burn off Madureira’s contract. The credits page features an Editor’s Note informing us that this issue “takes place a while back, like in October”, which explains why Spider-Man doesn’t sound like Otto Octavius, but even with that note at the beginning the whole story seems off. It’s pretty clear that Marvel’s been waiting on Joe Mad to finish these pages up so they can put it out, and I worry about the following issues and how delayed those might be as well. Hopefully Madureira had plenty of time to finish these issues up, or at least get a head start on them.

Posted on June 12, 2013, in Uncategorized. Bookmark the permalink. Leave a comment.

← Bring On the Bad Guys
Movie Review: Man of Steel! →