Comic Reviews: The Avengers, Detective Comics, and The Legend of Luther Strode! 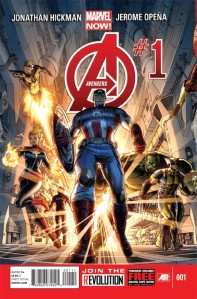 Jonathan Hickman has moved from one major Marvel team to an even bigger one.  Teaming with Uncanny X-Force artist Jerome Opena, Hickman’s plan for the book is to go bigger, in every sense of the word: bigger team, bigger stakes, and bigger scope. By and large, this issue works incredibly well, and is possibly Hickman’s most accessible book in a while.

Opening with a flash forward that evokes memories of Grant Morrison’s Batman storyline,  we learn of a massive battle that is to come, and then flash back to focus on two men: Tony Stark and Steve Rodgers. Tony awakens from a dream, and explains to Steve that he has a feeling. Something big is coming, and they need to be prepared for it. They need to go bigger, in case that day arrives. Flash forward 3 months, and it seems that day has arrived. After tracking a mysterious biochemical bomb that attacked Earth to Mars, Cap, Iron Man, Thor, Hulk, Black Widow, and Hawkeye (so the movie team), arrive on the red planet, which has now gone green.  A crew of mysterious villains have landed on Mars, and desire to recreate life on our sister planet. After a spectacular battle that unfortunately ends with our heroes defeated, a battered Captain America is sent back to Earth as a message to the planet.  Thankfully Captain America and Iron Man acted on Tony’s premonition 3 months ago, and had been quietly recruiting more people to join the Avengers ranks. Now, readying to launch a rescue mission, Cap puts out the call to the reserves, leaving us with a cliffhanger that has me salivating for issue 2!

Thankfully this opening issue of Avengers is an accessible Jonathan Hickman issue. While I enjoy his writing a lot, there are times where I’ve found myself scratching my head while reading some of his past stories. However, this issue is the best balance of crazy, epic ideas and accessibility. Using the “movie” team as the first team to head to Mars is a great idea to get new readers into this book. While a group of demi-godish creatures recreating life on Mars is extremely out there, but having those characters is the hook new readers need to effectively set up the stakes, and get us to where we need to be by issue’s end. Hickman gives us just enough information on these enemies to understand what they’re doing, yet he still keeps much of their background a mystery as well.

Equally as important in this issue, Jerome Opena’s art is fantastic. The battle between the Avengers and their new foes is suitably large and grandiose, but there’s also plenty of quieter moments that stand out, like Tony at his computer in the beginning of the issue, or Banner right before the Avengers leave the quinjet on Mars (which was hands down my favorite panel of the week).  Avengers  is one of the stand out premiere issues of the Marvel NOW! relaunch, and looks to be one of the biggest runs on the team ever. 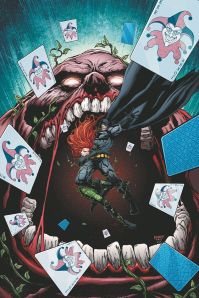 I’ll SPOIL this one thing for all of you expecting Joker to feature prominently in this “Death Of The Family” tie in: he doesn’t. Despite having one of the sweet die cut covers, the latest issue of Detective Comics shows the Clown Prince twice. However, that doesn’t mean that this issue is bad. Not in the slightest. In fact, ever since John Layman and Jason Fabok took over this title from Tony Daniels, Detective Comics has easily become one of the top Batman books that DC is publishing currently.

Concluding the Clayface/Poison Ivy story,  this issue finds Batman attempting to subdue Clayface, and more importantly, find out Poison Ivy has been able to control him.  Layman’s script is very solid, and features lots of funny asides, something that you wouldn’t expect to find in a Batman book. When it comes to that art, where has Jason Fabok been my entire life? It seems like this guy showed up out of nowhere, but if you look at his pencils, it looks like the work of seasoned pros. He’s quickly becoming not only one of my favorite Batman artists, but one of my favorite artists, period. For those turned off by Daniels’ start on the series,  they’d be wise to check this book out. 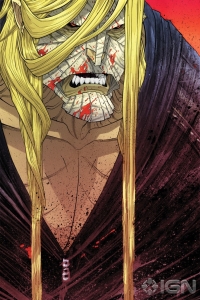 One of the most anticipated titles of 2012, The Legend Of Luther Strode is the sequel to Justin Jordan and Tradd Moore’s awesome (and awesomely violent) debut series, The Strange Talent Of Luther Strode. Picking up five years after the original story, the first issue of the sequel series serves as both an excellent continuation of the story of Luther Strode, but at the same time is a great jumping on point for people who’ve never heard of the original story.  It’s book that’s not for the squeamish (ever wanted to see a guy’s head get punched so hard it explodes?), but it captures the feelings of loss, loneliness, and vengeance that Luther Strode has dealt with in the years since the previous story’s finale.  He lost everything the last time we saw him, and now that he has nothing left to lose, he’s even more dangerous than ever.

Writer Justin Jordan and artist Tradd Moore have made a lot of headway in the year since they started the original Luther Strode series. Jordan is currently writing Shadowman for Valiant and Team 7 for DC (where he’ll soon start on Deathstroke as well), and Moore was featured in the digital Legends of The Dark Knight series. It’s awesome to see that even though these guys are starting to get some notice from bigger publishers that they’re still returning to the series that started it all for them. The Strange Talent of Luther Strode was one of my favorite titles of the year, and I’m happy to say that the first issue of the sequel is just as good, if not better. Seriously, buy it.

Posted on December 5, 2012, in Uncategorized. Bookmark the permalink. Leave a comment.