Rick Remender’s “Trial of Fantomex” storyline continues in this issue of Uncanny X-Force,  which starts to pick up after the rather lackluster past two issues.  While still a little confusing, Remender gives us some great character moments and reveals that keep the plot moving.

X-Force is still split on Otherworld, with Psylocke attempting to free Fantomex from her brother Captain Britain, and Wolverine, Deadpool, and Nightcrawler (from the Age Of Apocalypse timeline) caught in the middle of a war between the Captain Britain Corps and a demonic army intent on taking over the dimension. Remender really shines here and shows off how well he knows all of these characters. I especially like the dialogue he creates between Wolverine and Deadpool as they make their way towards the demon general’s quarters to assassinate him. Deadpool’s a character that I feel got old in his own series, but Remender has a knack for writing the character in a way where he doesn’t get annoying.  The scenes between Fantomex and Psylocke are quieter (as to be expected), but there’s a great and  unexpected pay-off to their budding romance that I honestly did not see coming. It’s a great look into how Fantomex plays with his teammates, and it adds another layer to the character to keep readers guessing.

However, there are a few things that need be addressed in this issue. For one, the pacing was a little off.  Perhaps it was just me, but we get no transition between Psylocke and Fantomex being in a room talking and them riding a zombiefied dragon thing. One scene they’re sitting down, the next they’re flying above the battle below them. It’s a little jarring, and I had to go back a few times to make sure I didn’t miss anything.  It’s nothing that really takes away from the whole plot, but it does disrupt the flow of a pretty good issue.

Another misstep is still the art. Nothing against Greg Tocchini, but his style is not suited for this series. His figures are messy and change forms too often for a book like this. After the stellar art from the likes of Jerome Opena,  this is a step down. Hopefully the artist that comes on after this arc is more in the style of the series.

Uncanny X-Force #22 continues to flesh out this Otherworld adventure, but I hope the storyline wraps soon so we can get the team back to the Marvel universe proper. Uncanny X-Force is one of Marvel’s best titles out there, and while this issue isn’t as good as the previous storyline, a pretty good issue of UXF is still better than most books out there on the shelf. 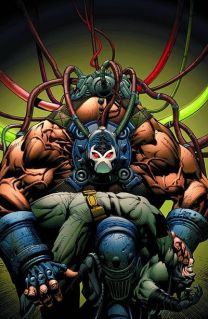 When the “New 52” started, I had to take stock of the five Batman books that were coming with the relaunch. After trying them all out, some had to go, and Detective Comics and Batman: The Dark Knight were the titles left on the shelf, watching as I took the others home. And after finishing the newest issue of Dark Knight, I’m still confident in my decision.  I’ll be completely honest, I only picked it up because of two things: David Finch drawing Bane, and David Finch’s cover re-enacting Bane’s greatest achievement.

Where to start with this book? It’s clear that even though Paul Jenkins is listed as a writer/plotter, this is still Finch’s ship.  Yes, he’s a talented artist and a big draw for comic fans, but a writer/plotter he ain’t. In fact, Dark Knight #6 is the first comic I have ever seen that has a credit for “dialogue assists”.  Seriously?

The plot breaks down like this: Batman has been on the trail of someone juicing up different villains, amping up their power levels so that they are physical powerhouses capable of killing Batman. After a quick guest appearance from Superman (who flies off to help Flash, who has been poisoned), Batman chases after White Rabbit, a new villain that will most likely be forgotten after this storyline ends. After chasing her and Scarecrow down, guess who shows up? I’ll give you a hint: he’s on the cover and is in the new Batman movie this summer. That’s right, Bane shows up, and while he looks awesome (and very much like his Arkham City incarnation), all he does is beat the crap out of Batman and explain that the new venom drug he’s been suppyling to the villains of Gotham is actually increasing his intellect. The fact that Batman wasn’t able to put this all together until NOW is criminal, and I still have yet to find a decent reason for this series to exist. I’d much rather have Finch DRAW (not plot/write/think about) any of the other Batbooks that are out there. All I have to say about it is this:

It’s dumb as hell, but it sure looks pretty.

Posted on February 22, 2012, in Uncategorized. Bookmark the permalink. Leave a comment.