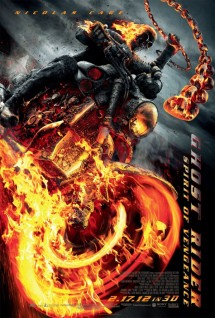 Let’s get this out of the way: Ghost Rider: Spirit Of Vengeance is not going to topple The Dark Knight as the best comic book movie ever made. That being said, it’s leagues better than the Mark Stephen Johnson “directed” turd that came out in 2007. Under the helm of Crank directors Mark Neveldine and Brian Taylor, Spirit Of Vengeance serves as a reboot of the first film, and has all of the insanity that you would expect from the directors who brought you Crank, Gamer, and Crank: High Voltage. And it also has a heaping amount of Ridiculous Cage.

The film follows the recently relocated Johnny Blaze (the legend himself, Nic Cage), living in a self-imposed exile after his deal with the devil. Blaze is approached by Moreau (Idris Elba), a hard-drinking, gun-toting renegade monk who tells him that he needs to protect a young boy named Danny, who is believed to be the Anti-Christ. As expected, Blaze tells him he can’t because he believes that he cannot control the Rider. But that soon changes once Blaze learns that the devil himself is planning on taking over the young boy so he can further walk the Earth. Teaming with Moreau and the boy’s mother (played by Violante Placido), Blaze heads off to find the boy and a way to undo his curse.

That’s the main gist of the story. Expecting anything deeper than Ghost Rider messing people up and Nicolas Cage overacting as only he can is doing yourself a disservice, and if you go into the film expecting Crank except with Ghost Rider in the place of Jason Statham, you’ll have a good time. Cage is in full on “Nic Cage mode” here, going from hilarity to despair to attempts at intimidation sometimes all within the same scene. There’s one in particular where he is trying to hold back the Ghost Rider while trying to get info from a thug. Watching Cage overact holding back a demonic entity is something that needs to be seen to be believed, and “He’s scratching at the dooorrrrrr” will go down as one of the new great Nic Cage quotes. Cage also did all of the motion capture for Ghost Rider, and his movements are really unsettling and jerky, which is expected from something that is an ancient demonic entity. Apparently Cage painted his face on set while filming these particular scenes, so while Spirit Of Vengeance may not be a great movie, you can’t say that Nic doesn’t give it his all.

The same can be said for Neveldine and Taylor. After seeing both Crank films, I had a pretty solid idea of what I was in store for action-wise, but I was really impressed with how the film was shot. Sure, there’s the strange angles and cuts that one expects from their films, but the way they portray Ghost Rider taking out his enemies was very cool, and has a very slasher-movie vibe to it. I especially liked the weird mannerisms that the Rider does, as well as the fact that he can turn basically any vehicle he encounters into a hellfire death machine. As awesome as the action scenes are, the film does stumble in the quieter moments, and drags in the middle a little bit. It also gets a little too talky, with characters like Moreau basically serving as exposition ciphers to give us background info on nearly every character and their relationships to one another. However, every scene that features the Ghost Rider is awesome, and offers some of the best scenes from the movie. Unfortunately a lot of them are in the trailer, but there are still some surprises. Speaking of the Ghost Rider, the effects used to bring him to life blow the first one out of the friggin’ water. His skull is blackened and charred, his movements are extremely creepy but powerful, and he generates so much heat that the leather on his jacket bubbles. And as an added bonus, his fights are more than him falling down, getting up, and whipping a guy!

While Spirit Of Vengeance isn’t a good film by any stretch of the imagination, I still really enjoyed it. I’ve made my distaste for the first film well known, so perhaps the fact that this film is so completely different from it is what I found enjoyable. Or maybe it’s because I’m aware of Neveldine and Taylor’s previous work, so I knew that this film wasn’t going to be anything near the gold standard of comic book movies. Or it’s my strange fascination with Nicolas Cage. To be honest, it’s probably because they reboot the movie origin so that this time Blaze willingly sells his soul instead of being tricked into it. Whatever the case, I had a blast watching this movie, and while I completely understand why the online critics have been crapping all over it, I still really liked it. It’s not good, but it’s so crazy and over the top that it’s hard not to enjoy it. Much like Punisher: War Zone, it’s an extreme guilty pleasure that plays like a live action Looney Tunes cartoon, and it doesn’t try to be something it’s not. When it comes out on blu ray or DVD, couple Spirit Of Vengeance with Punisher: War Zone and you’ll have yourself the makings of an epic movie night.

Posted on February 21, 2012, in Uncategorized. Bookmark the permalink. Leave a comment.